There were also 49 producing wells and 17 wells in some phase of drilling across the county.

Carroll County remained at the top of the state’s total permit list with 460.

Carroll County also continued to lead the state in producing wells, with 314, and was among the top four counties with its 82 wells in some phase of the drilling process, according to the ODNR.

Following a month with 22 new permits in December, the pace in Harrison County slowed, with only three permits issued in January, all to Chesapeake Exploration in North Township.

Harrison County did have the most wells currently in some phase of the drilling process, with 140. Much of the drilling activity in January took place in North, Archer, Moorfield and Nottingham townships.

Harrison County also had the second highest number of producing wells in the state, behind Carroll County, with 116.

However, the county did lead the state in wells drilled or drilling in January, with 89. The majority of the drilling activity last month took place in Londonderry, Millwood, Oxford and Richland townships.

Monroe County was also among the most drilled or drilling wells in January, with 83. Most of the drilling activity took place in Washington, Sunsbury and Seneca townships. 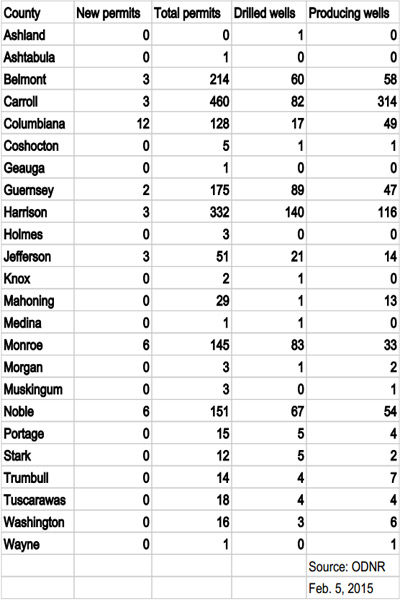 The ODNR has issued 44 permits for horizontal drilling in the Marcellus shale. There are 29 drilled Marcellus shale wells in Ohio. No permits were issued in January.

The Pennsylvania Department of Environmental Protection has issued 184 gas well permits thus far in 2015. In addition, the Pa. DEP reported 112 wells drilled to date this year.

There was also one permit issued in Beaver County in January.

The most new permits were issued in Marshall County, with 12. All 12 were issued to Noble Energy on properties owned by Steve and Ed Ward and Consol Mining Company/Consol Energy.

One permit was issued in Monongalia County, to Northeast Natural Energy, on property owned by Enroute Properties.

Feed the birds, but still keep an eye out for illnesses