SALEM, Ohio — Drilling and plans for oil and gas wells appear to be picking up in Monroe County.

A single permit was issued in Brookfield Township to Anadarko E&P Onshore LLC.

Six permits were also issued in Carroll County. Three were issued in Lee Township, two in Fox Township and one in Perry Township. All of them were issued to Chesapeake Exploration.

The hunt for successful producing wells also appears to be moving in Belmont County. There were four permits issued during October.

Two were issued in Smith Township to Rice Drilling and two in Somerset Township to Gulfport Energy.

Two permits were issued in Jackson Township to Halcon Operations for drilling in Mahoning County.

In Trumbull County, there were three permits issued. All of them were issued in Lordstown Township to Halcon Operations.

In Muskingum County, one permit was issued in Meigs Township to Anadarko E&P Onshore LLC. 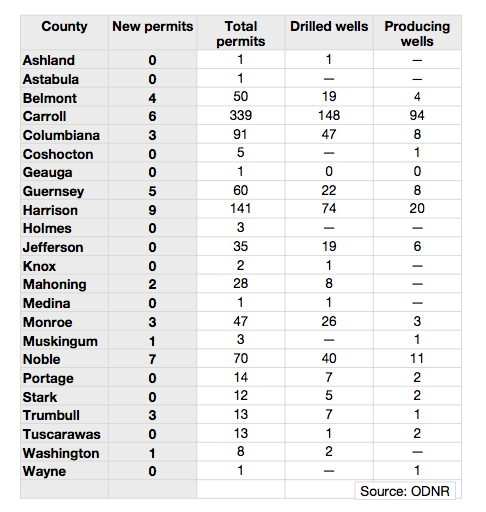 Three Utica shale wells have been plugged so far in Ohio, according to the ODNR. One was drilled and plugged in Clear Creek Township in Ashland County; a single well in Morgan Township in Knox County and one in Harrisville Township in Medina County, were also plugged.

Lycoming County in northeast Pennsylvania was the hot spot, with a total of 26 drilled, according to the DEP.

There were 13 drilled in Washington County, and 12 in Susquehanna County, where a sweet spot in the Marcellus shale has reportedly been found by Chesapeake Exploration.

Ten wells were drilled in Butler County and seven in Greene County.

The DEP issued 29 permits in Susquehanna County; 26 in Lycoming; 24 in Bradford; 13 in Butler; 10 in Greene; nine in Armstrong; and three in Beaver.

The West Virginia Department of Environmental Protection issued permits for drilling in the shale in Tyler, Wetzel, Marshall and Ohio counties.

In Marshall County, permits were issued for drilling in the Utica and Marcellus shale layers.

A separate permit was issued to Chevron Appalachia, LLC. for a Utica shale well. It will be on the same property as the Marcellus shale well. The property is owned by Williams Ohio Valley Midstream, LLC.

In Ohio County, one permit as issued to Chesapeake Appalachia, LLC for a well to be drilled on a farm there.