RADNOR, Ohio — The view from the road — at Rhoades Farms — is one of a neat and tidy farm, and that view continues even as you get off the road and into the machinery sheds and fields where Ryan Rhoades and his family farm.

This third-generation operation in Marion County covers about 2,400 acres of field crops and includes a 2,500-head swine finishing operation. The swine are fed and finished on a contract basis for Hord Livestock of Bucyrus.

Ryan, 33, farms with his wife, Amanda, his parents, Wendell and Janet, as well as long-time employee, Dave Peterson. The Rhoades also employ some part-timers and various seasonal helpers.

The younger Rhoades was recognized by the Ohio Soybean Association in March when he was named a winner of the 2014 Beck’s Young Farm Leader program. As a recipient, he could potentially win an expense-paid trip to the Commodity Classic, which will be held in Phoenix.

“If that happens, I’d be thrilled; if not, it was an honor being nominated,” he said. “You (at least) get to showcase the farm a little bit, which is always a plus.” 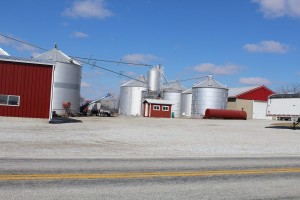 Rhoades is the father of three young children and is expecting the fourth in July. Hanah, the oldest, will be 7 in July. Stone will soon turn 4, and Olive will be 2 in July.

Ryan’s wife, Amanda, is a dietitian at Marion General Hospital and helps with book work on the farm, alongside Ryan’s mother, Janet.

Jerry Bambauer, president of the Ohio Soybean Association, said the award seeks to recognize “new, enthusiastic people” who will be soybean leaders of the future.  Bambauer said Ryan is showing a strong interest in the association and advocating on behalf of soybean growers.

“We’re trying to develop new leaders,” Bambauer said. “We need to tell our story. The younger generation is what we really need to pass it along.”

More importantly, he said Ryan does what all growers should do: He puts his family first; his farm second, and third comes his commitment to the association.

Growing up, Ryan exhibited swine projects at the Delaware County Fair and the family was always involved with swine, at one time raising them as an independent grower.

But today, they find greater efficiency by contracting, which provides the Rhoades with feed, medications and veterinary services in exchange for maintaining the finishing barns that house the swine. 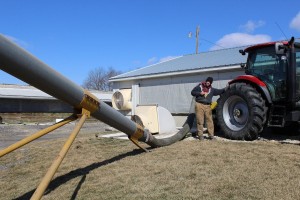 Ryan is a 2002 graduate of Wilmington College where he earned degrees in agriculture and Spanish. He became interested in Spanish in high school and decided he liked it enough to continue studying it in college.

However, since graduation he has not used the language as much as he had hoped.

“It’s amazing what you lose when you don’t speak it regularly,” he said.

Although Ryan doesn’t get a lot of chances to speak Spanish, he does get plenty of chances to engage with other cultures and nationalities. He is active with his local church, Fite Memorial Baptist Church in Marion, and his church also operates a sister church in Ukraine, known as House of Prayer.

Ryan has made various mission trips to Ukraine and his church continues to send missionaries, even amid the current crisis with Russia.

Ryan said his college experience helped him to understand there’s more to farming than what he first imagined and to build contacts within the ag community.

Peterson, who has worked for the Rhoades for 25 years, said he shares many of the same values as the Rhoades family, and appreciates their Christian values and the way they farm. Peterson’s son, John, is in high school and works part-time on the farm.

In those 25 years, Peterson said the farm has “changed drastically,” going from a time when they raised their own pigs, to contract finishing, and going from mostly conventional tillage to conservation tillage, and today, relying more on precision agriculture like variable rate planters and autosteer. 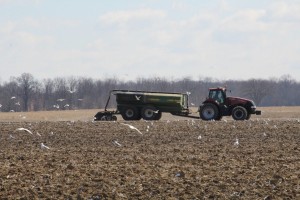 When Peterson started, Ryan was just a boy of about 7 or 8. Now, the two men farm and make decisions together.

The two have recently begun experimenting with cover crops as a way to retain nutrients in their soil during winter — especially the nutrients in the swine manure they apply. They’re planting a combination of radishes and annual rye that covers about 120 acres.

While Ryan’s father, Wendell, is still involved with the management side of the farm, the responsibilities are increasingly being passed on.

“It’s scary awesome what could happen,” Ryan said. “You’ve got to have your pencil sharp.”

And helping him keep his pencil sharp, as he leads the third generation of the farm, is his dad’s advice.

“Dad constantly tells me, he says ‘Ryan, the first generation makes it, the second keeps it and the third one loses it,’” Ryan said.

While that may seem cynical, Ryan said it’s also a reality — and one that he keeps in mind when he makes decisions.

A big challenge that Ryan’s generation faces is the availability of land. Although it’s available, the price to buy more land or rent is competitive and sometimes cost prohibitive.

The past few years, farmers have been rewarded with record high prices at harvest. But Ryan said it’s time for a market correction, and one that he hopes will get prices back to something more reasonable and sustainable.

Another concern is regulations. Farmers are constantly under the threat of federal EPA or state regulations that could limit things like fertilizer and nutrient applications, in ways that would severely hurt their operation.

The best response, Ryan said, is to stay proactive and do the right things first. That’s why he’s investing in cover crops and using waterways in his fields.

“It’s scary, in my opinion, the amount of regulation that could be headed our way,” he said. “We have to stay ahead of it.” 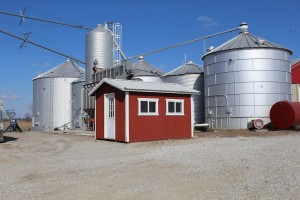