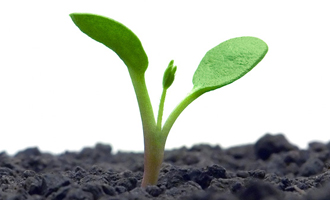 The $1 million complex, including an education center was funded entirely by an anonymous donor.

The greenhouse will provide clinically based educational programs for a variety of audiences, including children, to make a significant impact on the growing epidemic of obesity.

With more than 16 years experience, Lutz is the former co-owner of certified organic vegetable Maple Creek Farm in Yale, Mich., a resource for Henry Ford West Bloomfield since it opened in 2009.

Support from the top

Building a greenhouse and hiring a resident farmer at a hospital was the brainstorm of Gerard van Grinsven, president and CEO of Henry Ford West Bloomfield Hospital.

The produce being grown in the greenhouse is projected to reduce food costs at the hospital by more than $20,000 per year.

Lutz joined Henry Ford in November, providing input into the type of crops and how they would be grown. In June, she started planting organic seeds.

The greenhouse uses hydroponics — growing plants in water, instead of soil — to maximize diversity, and maintain space for patients, staff and visitors. With hydroponics, growers have more control over plant health, with recirculating systems using only 10 percent of the water needed in soil-based farming.

Beneficial insects are released when necessary to control harmful insects. And, with no soil, there are no weeds.

“The accelerated growth that hydroponic growing promises is true,” said Lutz. “I have never seen such plant production in such a small space..”

In addition to feeding patients, the produce is used in the hospital’s 90-seat demonstration kitchen, where healthy cooking classes are offered to the community, and Henry’s cafe. They are also sold at Henry Ford West Bloomfield’s seasonal weekly farmers’ market, which is open to the public.

“I work closely with our chefs so they know what is being grown and when it will be available,” said Lutz. “And I am open to their suggestions as to what they would like to see grown.”

Additional plantings in the soil surrounding the greenhouse are planned.

Tours of the greenhouse are available seven days a week, from 9 a.m. to 4 p.m., with in-depth tours and workshops by appointment. The attached educational center will also be available for events.

Plans include a steady stream of school field trips, so children can learn better nutrition, which can prevent childhood obesity, and many chronic diseases.

Gardening therapy will allow patients to take a role in their recovery while learning how they may prevent or manage chronic diseases through healthy growing, and eating practices. The space will be available for physical, occupational and behavioral therapy, as well as a place of respite for staff and people visiting loved ones in the hospital.

“Food has an impact on human health, and on environmental health,” said Lutz. “This is only the beginning.”