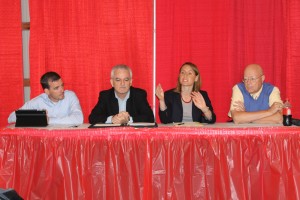 LONDON, Ohio — Sept. 30 will come and go with action taken in the House on the expiring 2008 farm bill. And don’t expect any until after the November elections.

House Speaker John Boehner, R-Ohio, while taking questions during a Sept. 21 news conference, indicated the full House will not vote on the farm bill until after November elections.

“When we get back after the election, we will consult with our members and develop a pathway forward,” he said, adding “it is too early to determine right now what kind of mood members are going to be in and what kind of opinions they are going to have.”

The House delays have drawn criticism from farmers across the country, but Boehner said House leaders “don’t typically put bills on the floor where we are expecting certain failure.”

The Obama Administration and the U.S. Secretary of Agriculture have also expressed frustration over the House vote delay.

“In a year that has brought its share of challenges to America’s farmers and ranchers, the House Republicans have added new uncertainty for rural America,” Sec. Tom Vilsack said in a statement to media.

Speaking at the Farm Science Review Sept. 18, Vilsack said he fears a “hidden agenda of sorts.”

“In the Ryan budget that was passed, there was a $50 billion reduction in commodity, conservation and crop insurance provisions,” Vilsack said, “and I fear that that is really the goal here, to get this wrapped up into a much larger discussion about deficit reduction and tax policy, and then make the case that farm programs and the safety net have to be cut even further.”

The U.S. Senate passed a bipartisan version of the farm bill in June and the House Agriculture Committee passed its version of in July, but the full House failed to take up the bill before its Sept. 30 expiration.

But this will not be the first time the farm bill expires before a new one is renewed.

“It’s more common than not common that the farm bill expires before another one is approved,” said Carl Zulauf, ag policy expert with Ohio State University, speaking on a panel discussion Sept. 18 at the 50th Farm Science Review.

Without an extension, farmers could be left without a disaster plan to handle the difficult year they just experienced, and wondering if and when one will be approved.

Zulauf said there is an “enormous incentive for farmers to act on this farm bill,” and one is the cost savings. Both the Senate and House Ag versions already save between $23 and $36 billion.

That’s in addition to the incentive of helping farmers and the nation’s nutrition programs, which depend on the bill.

One of the biggest changes in the current farm bill is the elimination of direct payments to farmers, and a stronger emphasis on risk management, mostly in the form of crop insurance and better crop insurance programs.

“The next farm bill will be about crop insurance and the cost of crop insurance,” Zulauf said. “It costs $5 billion a year now. It’s no longer a small program. We are at that point where we will be taking a hard look at that.”

Part of the change is due to record profits in the crop commodities, but also an overall tightening of the federal budget.

Ferguson said the Senate bill combines some key programs and cuts some others, in ways that are “radically different” than the farm bill discussions in 2008. The biggest reason, she said, is “the budget process.”

One farmer asked the panel why food nutrition programs are permitted to use the majority of farm bill funds, for programs like food stamps.

Roberts said part of the reason is, the bill represents rural as well as municipal regions of the country, and amounts to “a political compromise,” to include all interests.

Because House legislators failed to act before their recess, farmers will have to wait until the lame duck session in November to learn the fate of the farm bill.