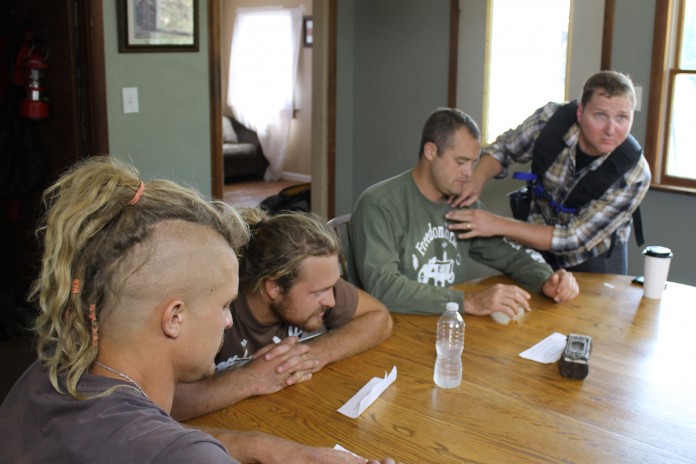 MERCER, Pa. — Grab a bowl of popcorn and turn on the television. There is a new reality series in the making, but it’s not your typical love story kind or survival of the fittest.

No, it’s about a different type of love affair. It’s about the love of the soil, wondering what the weather will do and surviving the turbulent economic markets.

Farm Kings is a television series being created to highlight what it is like to live on a farm and depend on it for your livelihood.

Farm Kings is about a family farm, Freedom Farms, located between Valencia and Butler, Pa. The series focuses on nine brothers, one sister and their mother.

Farm and Dairy had the opportunity to watch the reality series being filmed at the Mercer Livestock Auction June 5.

The family branched out into their own operation four years ago. Since then, the family has increased acreage for their vegetable business from 150 acres to 500. They have two farm markets. Freedom Farm Market is located on Pittsburgh Road in Butler, Pa., and the other, Market at New Kensington, is located on Shearsburg Road in New Kensington, Pa.

The family has also rehabilitated an old bakery and began business as Boldy’s Homemade Goodies on Pittsburgh Road in Butler. The bakery is located about a mile away from the Freedom Farm Market.

They also raise 1,500 free range chickens, and one of the sons, Dan, is contemplating branching out into the cattle business.

Lisa King, the mother of the boys, said it all started when the four oldest boys appeared on the front cover of the magazine, Edible Allegheny, with no shirts.

“They were then deemed ‘the shirtless farmers’,” said Lisa.

Word spread and before the family knew it, they received a call. A film crew wanted to come out and film the family for three days. A premiere was created from that video and the network signed on to it. The premiere will appear at 9 p.m. June 14 on the cable network, Great American Country (GAC).

Now, the film crew is back and they are taping the family’s moves so a 10-episode series can be created for airing in September.

“They (the network) are interested in families and farming, so we think it’s a good fit. It’s a show about young American farmers determined to be a success. Let’s face it, they are a dying breed,” said Lisa.

“It has changed our lives a little bit. We are just hoping it doesn’t slow us down farming.”

Dan King, 22, was at the Mercer Livestock Auction June 5 because he’s trying to diversify the farm even further and build a cattle operation.

“I’m still new to this. I’m reading all I can and doing all the research possible,” said Dan.

He said he thinks he wants a cross breed of cattle with some black Angus in it. He added that he appreciated all of the insight about the cattle markets the local farmers gave him at the auction.

“It’s a learning experience here today. I’m trying to take in as much as I can,” he said.

He said a pasture-based system with the cows will help provide fertilizer for the farm land, and when the cattle get finished in a paddock, the free-range chickens could be rotated into the land.

“I want to use the whole cycle,” said Dan.

Lisa and Dan said they want viewers to take a message away from the show — to realize how important it is to support local farmers, use CSAs (Community Supported Agriculture) and get back to the natural ways of the land, including canning their own vegetables.

“We want viewers to become less dependent on others outside the community. Buy from your local farmer,” said Lisa.

“We want kids to know that chicken nuggets don’t come from Wal-Mart. We want them to know where their meat comes from,” said Lisa.

If the show picks up enough interest, Lisa said a second season could be in the making.

To read more about my experience, watching the reality series being filmed in Mercer, Pa., click here.