The National Cattlemen’s Beef Association and National Pork Board announced the new names the first week of April. The names are expected to start appearing on packages by summer.

The new names are designed to allow retailers to differentiate and merchandise pork cuts more effectively while aiding shoppers in selecting and preparing pork, the Pork Board said in a released statement.

“The new names will help change the way consumers and retailers talk about pork,” said National Pork Board President Conley Nelson. “But more importantly, the simpler names will help clear up confusion that consumers currently experience at the meat case.”

Before the renaming process took shape, the Pork Board and the National Cattlemen’s Beef Association collaborated on research over an 18-month period. The research showed consumers are often confused by the different names for similar cuts of meat and, as a result, do not know how to cook a variety of cuts now available in the meat case.

To overcome this, the National Pork Board is working to simplify pork cut names and include basic usage and preparation information on the package. Several cuts of pork will now match the names for similar beef cuts for easier consumer identification and preparation.

The new cut names will eventually align with the foodservice industry, as well, to provide a consistent consumer perception of pork at restaurants and at home. 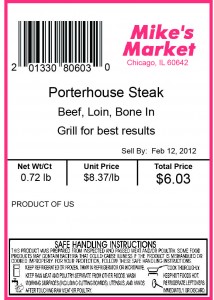 “Through our research we found that consumers are really familiar with three to four meat cuts,” said Trevor Amen, director of market intelligence with NCBA, during a pre-recorded interview.

“So the goal of this — one of the opportunities for the entire industry — is to broaden the spectrum of cuts that consumers are comfortable with, that they’re confident in purchasing the product, and then preparing the product correctly.”

The NCBA has presented its name-change recommendations to the Uniform Retail Meat Identification Standards (URMIS), which provides a retail meat cut identification system to ensure uniform names for cuts of beef, pork, veal and lamb.

The new names have been reviewed and approved by the U.S. Department of Agriculture’s Food Safety and Inspection Service, and Agricultural Marketing Service.

Amen said the differences will be subtle.

“A couple examples of those would be, you know, a ribeye steak is still a ribeye steak.But the new, individual muscle cuts the industry has worked to develop over the last several years are still unknowns.”

One example would be the flat iron steak.

Amen said the old system was too long and confusing.“So, we identified the common name now as ‘flat iron steak’ and then you list all of those unique characteristics down on the second line (of the label).”

As the new pork cut names suggest by their alignment with popular beef steak names, consumers can cook pork chops just like their favorite steaks.

“Research shows that consumers are buying cuts they are familiar with,” said Patrick Fleming, director of retail marketing for the National Pork Board. “Now, once they get their New York chop or ribeye chop home, they can grill it in the way they’re familiar with, too.”

For more, visit The Social Silo for a beef cut infographic.