SCIO, Ohio — At the time he purchased the 150-acre property in Harrison County, Ohio, that would become Sycamore Hill Tree Farm, Alan Walter didn’t plan on becoming a tree farmer.

“I bought it as a place to mushroom hunt,” said Walter, who was born, raised and still lives in Carrollton, Ohio. “I was interested in nature, but I didn’t know anything about trees. Making money was not on my radar. It was ‘trees are disappearing, I’ve got to save them.’”

His on-the-job education over the next 20 years would come with plenty of surprises. 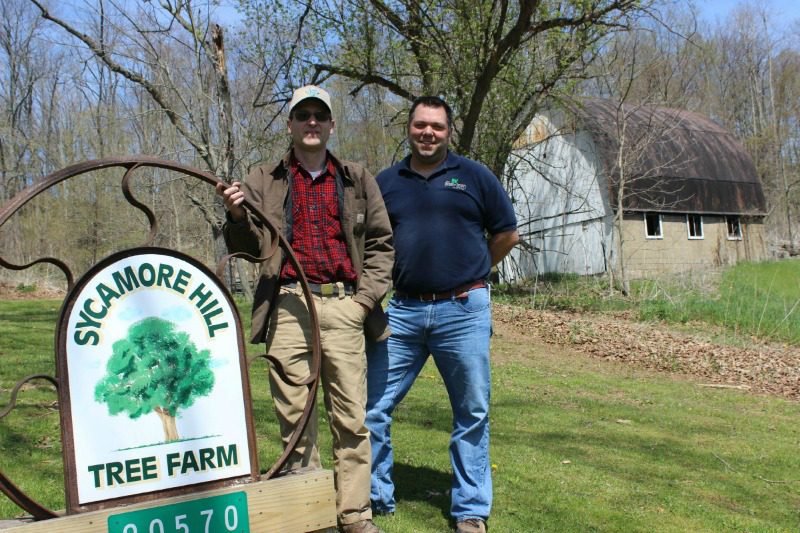 “I didn’t have any idea what to do to preserve these trees, so I called everybody I could — the ODNR, Division of Wildlife, OSU Extension,” said Walter, who was recently named the Ohio Forestry Association’s 2015 Ohio Tree Farmer of the Year. “I was against cutting any trees.”

Randy Clum, the area’s Ohio Division of Forestry service forester at the time, visited the property and consulted Walter on what he had, as well as the work he had ahead of him.

“At that time, I had a severe grapevine problem,” Walter said. “The grapevines work their way up the trees, stop the sunlight, get caught, and can actually drag a tree down.”

It would be 10 years before Walter cleared the property of the grapevines.

He was still working at Timken at the time, and was still looking at his efforts as, “‘I want to do something good for the woods,’” he said. “But in 10 years, you can start to see changes, the natural way things progress.”

Walter’s view of forest preservation, as it turned out, was also progressing.

Multiflora rose is a perennial shrub with arching, prickly stems that climb over other plants and form dense thickets. An invasive plant from Asia, farmers began using it in the 1940s as natural fencing.

Since Walter did not plan to farm his new property, the multiflora rose that covered his entire 150 acres was about as useful to him as an actual fence in the forest.

Federal and state cost-sharing programs reimbursed Walter for both his time and the chemicals used to fight the multiflora rose. Yet it still took him another eight years to eradicate his property of the plant.

Walter said guarding against invasive species remains one of his greatest challenges.

“Oftentimes the growing seasons are different than natives, and they grow up before the forest canopy has a chance.”

All the while, Walter was attending numerous forestry classes and field days.

“I learned you can make a few bucks while attaining your (forest preservation) goals,” Walter said. “Through crop tree releases, you can grow bigger trees faster and healthier by cutting out the competition. That was one of the reasons I joined the East Central Ohio Forestry Association.”

Scherf said one of the most important parts of the tree farm program, and its recognition of a tree farmer of the year, is the opportunity for landowners like Walter to tell their story.

“Most questions (have to do with) how to identify what trees they have, or just ‘I have this property, what should I do with it?,’” Scherf said.

Scherf said there are 1,600 tree farms in Ohio, with 94 percent of land in the state privately owned.

“So less than 10 percent is controlled by tree farms,” Scherf said. “And Alan was a little unique. Most of the wildlife preservation tree farmers are interested in deer and turkey, for hunting. A big one for Alan was songbirds.” 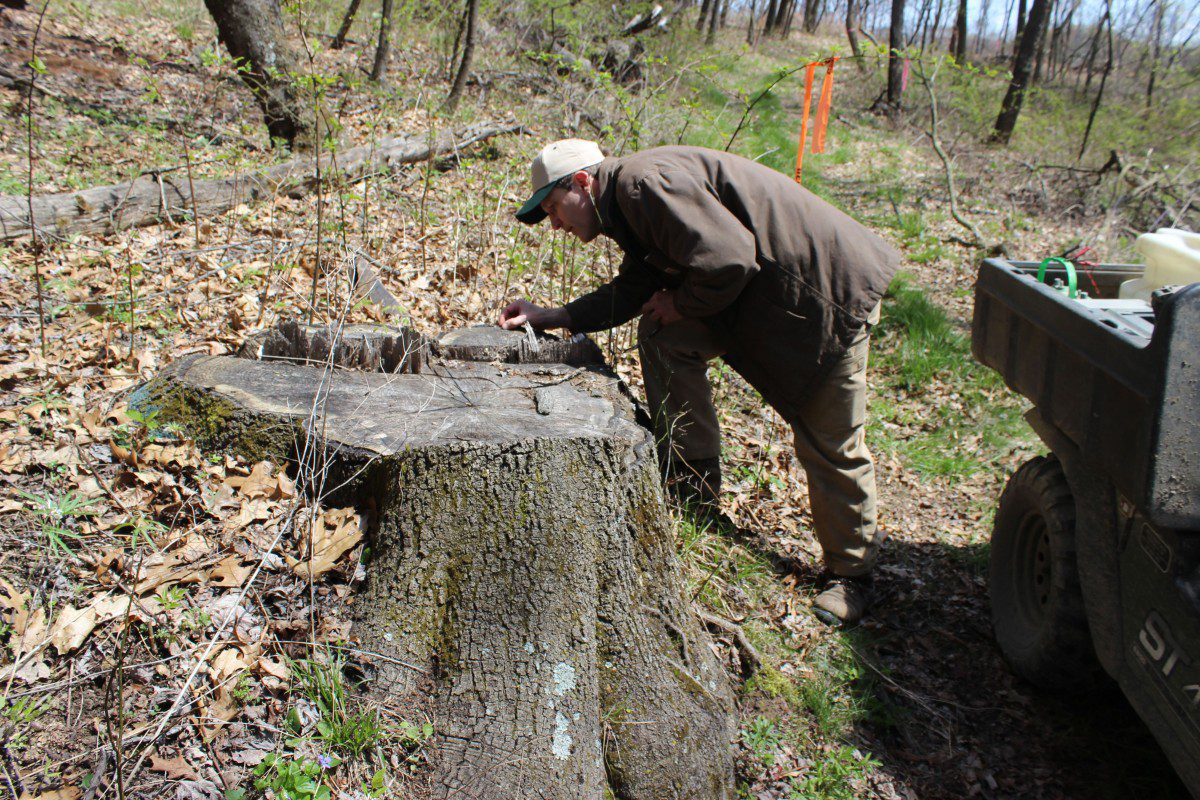 By 2013, the man who at one time could not see himself cutting down a single tree had organized his first tree harvest and was planning his first clear cut.

Walter’s first harvest brought in $88,000. He was told by consultants that he could have made $250,000 if he had cleared the entire woods.

Black locust logs are valued as fence posts and hops field posts — a market he capitalized on by “just being in right place at right time with species,” he said.

He hasn’t done any replanting, but trees are already beginning to come back in the clear cut area, Walter said. “The forest wants to grow back and you can help it along.”

Walter said both his preservation efforts and his goals have changed over the years.

“My primary goal was to get big trees,” he said. “My No. 1 goal now is using the forest for multiple uses. It doesn’t have to be all or nothing.”

That epiphany came with some surprising neighbors. Following the 2013 harvest, Chesapeake Energy negotiated with Walter to put in a 14-acre well pad on the property, taking 18 acres of trees in the process. But a new access road, which will make future harvests easier, along with various erosion-control measures, also came with the deal.

In all, Walter said, the relationship with his new “neighbors” has been a positive one.

Sycamore Hill Farm has a mix of red maple, ash, elm, and cherry in areas of former pasture land, all less than 70 years old by Walter’s estimation, and largely “reforested” by windblown or bird-deposited seed.

The never-farmed area on north end of the property is home to hickory, white and black oak, chestnut oak trees in the 100-year-old range.

Tree farming is far from a get-rich-quick venture. “It could be from $20 to 50 cents a board foot,” said service forester Jeremy Scherf said, with the average being about $750 an acre harvested.

“Timber is not a steady revenue stream, it’s more like Social Security,” Walter said. “But there is always something to do — spraying, trail management, crop tree releases, nest box management. And if we did nothing, the invasive species would choke out both the trees and the wildlife that lives in and around them.”

Requirements: In order to be considered for the program, a property owner needs 10 acres of woods, and the forest must be a certified.

Certification: Certification includes inspection by a forester for erosion control and “special sites” of natural or historical significance, such as Indian caves, venal pools, and historical foundations; a commitment by the landowner to use the property for forest management purposes; and education in the proper use of herbicides. Recertification is required every five years.

Payoff: Scherf said there is no cost to becoming a tree farmer, but there are forest maintenance expenses.