WASHINGTON, D.C. — A heavy snow storm caused cancellations and delays for all flights to the Ohio Farm Bureau county presidents’ annual trip to the capitol March 3, forcing the three-day event into two.

Flights were rescheduled into the next morning, except for one group from Dayton, which had to call the trip off completely. Those who did make it to Washington were treated to some surprises as their schedule was changed, but with new and timely additions.

A big focus was the farm bill. It was the first time in three years members did not have to lobby congress to pass one. The president signed the bill into law Feb. 7. Instead, members learned how the new bill will be implemented.

Mary Thathcher, senior director of congressional relations for AFBF, said it looks like the commodity title will be implemented this year, with sign-up for some of the programs by late summer and into fall. Most crop insurance programs will not be implemented until at least the 2015 crop year.

An ongoing issue is the Country of Origin Labeling program, which requires meat products to be labeled according to the country from where they came. This has caused tension in some of the United States’ biggest trade partners, especially Canada.

The 2014 farm bill upheld COOL, despite a strong challenge from some meat and cattle organizations, including NCBA. They said it was unfair to U.S. trade partners — especially Canada, which represents the nation’s and Ohio’s largest trade partner.

The Canadian frustration over COOL was clear when OFBF members visited the Canadian Embassy. Ambassadors said COOL is too cumbersome and costly for the meat and grocery industry, and places unnecessary restrictions on trade-flow between the two nations.

According to the Canadian embassy, the United States and Canada traded $710 billion of ag products in 2012, and Ohio and Canada alone traded $1.7 billion. 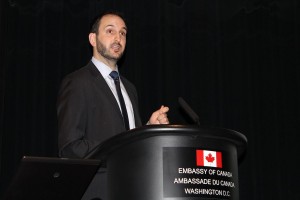 Mike Hawkins, Canadian ag counselor, said the two nations have long enjoyed a “unique and beneficiary relationship,” but one that is definitely challenged by what he called “border thickening and protectionism.”

The COOL battle is long from over. The World Trade Organization held a recent hearing on the matter, and a decision could greatly shape the future of COOL and trade with Canada.

Members also got an ag policy update from Krysta Harden, deputy secretary of the U.S. Department of Agriculture. The Georgia native recalled the lessons she lived growing up on her family’s peanut and crop farm, where her parents still live.

“Farmers and ranchers are the backbone of our economy and our country and we (USDA) are here to work for you and represent your interests,” she said.

Two big interests of her own are making sure farmers get the credit they deserve, and making sure there is a future for farmers.

“I want to make sure that the general public knows what you do — the great stewards that you are,” she said.

She commended Ohioans for working on the Lake Erie water quality issue, and said farmers in general are good conservationists and stewards of the land.

As she looks to the future, she sees a serious need to empower young farmers to take over the next generation. It’s an issue even her own family faces with their Georgia farm, and she said it’s important that ag education, people and the optimism be there for youth.

“It’s personal for me,” she said. “We have to help our young people see that they can make a living, they can be successful.”

Peterson, who is a long-time House Ag Committee member, said it was a “damn miracle” lawmakers were able to get a farm bill done. The debate went on at least three years, resulting in a bill Peterson said “wasn’t perfect, but wasn’t too bad of a deal.”

He alluded to a well-known challenge with farm bills — they’re hard to get passed and seem to get harder each time.

The challenge, he said, is lawmakers and the public are increasingly disconnected from agriculture, and don’t understand the needs of farmers. This is partly why food stamps and nutritional funding is attached to the farm bill, because food stamps resonate with urban populations than farm programs.

“Ninety percent of the people in this country are urban,” he said. “They have no idea what you people do and they don’t care. And the way we get them to vote for the farm bill is by food stamps.”

Nearly 80 percent of the 2014 farm bill went to food stamps.

Thatcher said this is the seventh farm bill she’s worked on, and definitely was the most difficult. But, she said each farm bill depends on the situation at the time, which could change for better or worse over the next five years.

“A lot depends on what the circumstance is and where we’re at in the next five years,” she said.