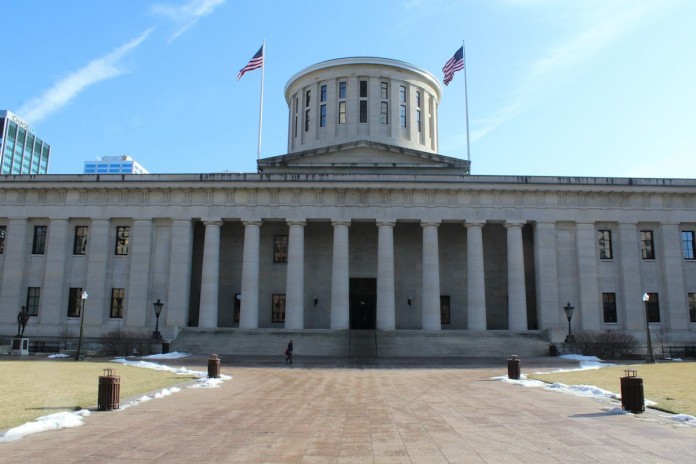 The bill is largely in response to the two-day Toledo drinking water ban of August, 2014, after an unsafe level of the algae toxin microcystin was found at one of the city’s drinking water plants.

The highlight of the bill is a ban on manure and fertilizer application to frozen and snow-covered ground in the western Lake Erie basin. Manure and farm fertilizer are known contributors to phosphorus loading in the lake, which promotes the growth of harmful algae.

Ohio Senate President Keith Faber, R-District 12, said the bill is “all about making sure that whether the water comes from Grand Lake St. Marys or Lake Erie, that we have healthy clean water, and at the same time making sure that we protect and preserve Ohio’s number one industry — agriculture.”

Note: Farm and Dairy watched the proceedings via The Ohio Channel.

House Speaker Cliff Rosenberger, R-Clarksville, said the bill will not fix the algae situation by summer, but that it adds significantly to the “foundation that we’ve been focusing on.”

Sen. Randy Gardner, R-Bowling Green, said the bill makes a half-dozen significant improvements, including the winter nutrient ban, regulating farmers who transfer manure from large farms to other farms, regulating and banning open lake dredging, and creating a coordinator for the Office of Harmful Algae Management and Response.

The bill prohibits open-lake dredging and dredging into the lake’s tributaries beginning July 1, 2020.

The bill also includes new requirements for publicly-owned water treatment plants, including those with a design flow of one million gallons a day or more. They will be required to begin monthly monitoring of total and dissolved phosphorus by Dec. 1, 2016.

Rep. Jim Buchy, a House Ag Committee member and Republican from Greenville, said the bill amounts to a “package that is going to help stop the bleeding. It’s not going to stop algal blooms but it’s going to help focus on what we’re going to do long-term to make it better.”

Lawmakers were asked at the press conference, why the restrictions came after the Toledo water crisis and not sooner.

“There are a lot of reasons that we had Toledo’s water problems,” he said. “Management of the Toledo plant was certainly one of them, but the reality is we all recognize that this problem is not going to get fixed unless we identify it and address it.”

The nutrient application rules are the first of their kind for such a large area in Ohio, and some farmers have voiced concern over whether the rules will eventually apply statewide, and what the effect might be.

Gardner said the bill will help improve the situation, but he said farmers still face unexpected weather events that they cannot always plan for. It will take time and some practice to know how successful the western Lake Erie ban will be.

“We know it’s (the bill) another step in the right direction, we know it’s meaningful, but until you tell me what the temperatures are, what the wind direction is, what the rainfall events are, it’s impossible to know just what kind of impact this may have on the lake,” he said. “Those are just fact-of-life issues that agriculture and all of us confront every year.”

The bill includes a three-year review process that requires Ohio lawmakers to review the rule and recommend any necessary changes to the governor.

If signed by the governor, the bill will join another landmark bill passed by the legislature last year, that requires Ohio farmers who apply chemical fertilizer to 50 or more acres be state certified by September of 2017.

• States that the prohibitions do not affect any restrictions established in the Concentrated Animal Feeding Facilities Law or otherwise apply to those entities or facilities that are permitted as concentrated animal feeding facilities under that Law.

• The bill prohibits any person in the western basin from surface applying fertilizer in a granular form when the local weather forecast for the application area contains greater than a 50 percent chance of
precipitation exceeding one inch in a 12-hour period.

• Prohibits manure application when the local weather forecast contains greater than a 50 percent chance of precipitation exceeding ½ inch in a 24-hour period.

• Authorizes the director of agriculture or the director’s designee or the chief of the Division of Soil and Water Resources in the Department of Natural Resources, or the Chief’s designee to investigate complaints filed against a person who violates one of the prohibitions, including applying for a search warrant.

• Authorizes the director or chief to assess a civil penalty against a person who violates one of the prohibitions only if the person is afforded an opportunity for an adjudication hearing.

• Requires the amount of the civil penalty to be determined in rules, but prohibits the penalty from being more than $10,000.