FULTON, Ohio — There’s still a few more weeks before most Ohio maple producers will begin to set their taps, but producers at the Ohio Maple Days Workshop Jan. 22 in Morrow County were gearing up.

The event was appropriately held in the woods, back a long, winding lane that led to a secluded log cabin on the Lutheran Memorial Camp property.

And, yes, there were pancakes and sausage, with plenty of pure maple syrup.

But regulations, production tips, and perhaps most importantly, the new international maple syrup grades, were the main focus.

The new grading system has been in the works for at least 14 years, and experts say this looks to be the year Ohio and the nation adopt it.

The grading system is a proposal of the International Maple Syrup Institute and seeks a unified grading system that will help unite everyone from producers to consumers. It includes a color class that is also based on flavor, and specific criteria related to quality, labels and production. 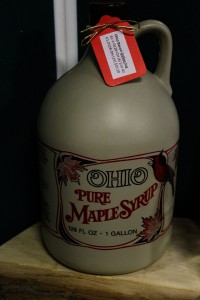 The challenge has been implementing the policy at the international level, which includes the U.S. and Canada. Some states, like Vermont, have already implemented the new system, while Ohio and others are on the verge.

“We are on the threshold,” said Gary Graham, extension educator in Holmes County and state maple syrup specialist. He predicted it will be passed in Ohio this year.

When it does pass, producers can grade their syrup themselves, and they can receive a Grade A color/taste classification, according to the percentage of measurable light that passes through the product. Grade claims will be accepted and enforced by government agencies within the producer’s state or nation.

The proposed color and taste classes range from the lightest-colored, “Golden Maple Syrup with a Delicate Taste,” to the “Very Dark,” strong-tasting syrup, which is generally recommended for cooking purposes.

Graham recommends syrup makers post a copy of the new grading system in their sugar shack or retail place, so consumers can see each color/flavor class and the criteria. The International Maple Syrup Institute has color-specific, printable posters available on its website, www.internationalmaplesyrupinstitute.com.

The range of classes will be a good thing for consumers, who prefer a range of flavors according to their own palate.

Graham brought a bold-tasting syrup for sampling — although it was not part of the maple family. The syrup was from Alaskan birch, which has a dark-colored, molasses taste. Some producers sneered when Graham suggested they try it, but those who did said it tasted fine — just distinctly different.

Graham said it’s good for syrup makers to taste other syrup, because it gives them “a whole new appreciation” of what’s out there.

Dan Milo, food safety supervisor at the Ohio Department of Agriculture, said a maple syrup processor who boils sap with a minimum of 75 percent of the sap collected directly from trees by the same processor, is exempt from licensing, registration and mandatory inspection.

All food products, including packaged maple syrup, however, are subject to state ag department food sampling.

A syrup processor is required to label his products, including the name and address of the business, name of the food, ingredients and net weight and volume.

Milo said Ohio does not require a maple grade, but “obviously if you put grade on it, it has to be an accurate grade.”

He also said producers who are selling across state lines will need to be inspected, according to federal law.

Although maple producers are exempt from certain inspections, Milo said it may benefit them to submit to some voluntary inspections, so they can make the most use of their facility.

During a talk about tapping research, Mark Isselhardt, research associate at Proctor Maple Research Center at University of Vermont, said studies usually show a significant increase in production using two taps. With gravity systems, this can be an increase of 50-60 percent.

There are many factors that influence total sap yield, including the number and condition of trees, the type of collection system and whether a vacuum is used. Producers can read more about research and findings at www.uvm.edu/~pmrc/.

Between speakers, Graham spent some time evaluating producers’ hydrometers. A hydrometer is used to measure the density of syrup and the amount of sugar.

When the hydrometer is off, issues in the syrup can range from spoiling and fermenting, to crystal sugar deposits.

Graham said it usually costs less than $20 to buy one, and it more than pays for itself. He recommends having at least two at all times.

• To learn more about the proposed international standard, visit www.internationalmaplesyrupinstitute.com, or call 613-658-2329. You can also print a color-specific poster for your business.
• To learn more about maple syrup research and findings related to tapping strategy, visit the Proctor Research Center online at www.uvm.edu/~pmrc/. You can also call them at 802-899-9926.