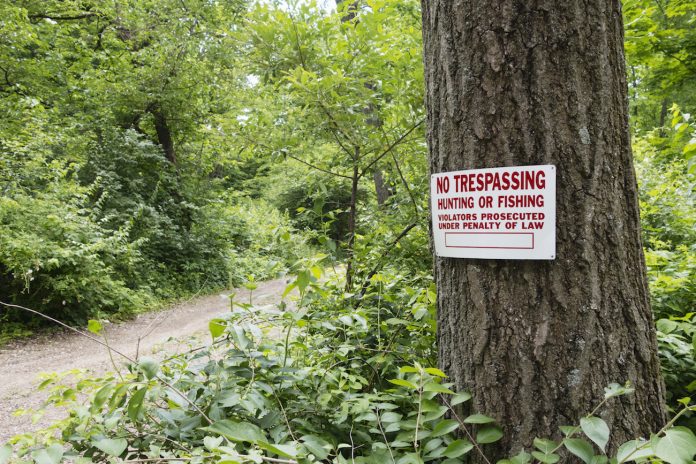 The purple paint bill is back in the Ohio legislature.

State Sen. Bill Coley, R-Liberty Township, introduced legislation March 4 that would give landowners the option to use purple paint as a no trespassing notice on their properties.

Specifically, Senate Bill 290 would amend the Ohio Revised Code section on criminal trespass to specify that putting purple paint marks on trees or posts “constitutes posting notice in a manner reasonably calculated to come to the attention of potential intruders.”

The paint marks would have to be a vertical line at least 8 inches long, between 3 and 5 feet from the ground and be placed no more than 25 yards apart from each other.

Using purple paint doesn’t replace the use of no trespassing signs. It’s another option to post a property.

“You want to give landowners options,” Coley said. “For a lot of them, sometimes, those no trespassing signs become target practice … The great thing about purple paint is it doesn’t go anywhere and nobody’s shooting at it.”

Coley introduced the same purple paint legislation three years ago, but it died in committee. Both the Ohio Sportsmen’s Alliance and Ohio Farm Bureau Federation testified in favor of the bill at the time.

“It’s another tool in the toolbox,” Seegers said.

Coley said he sees it not only as a good thing for farmers and other landowners, who can more easily mark their properties using paint, but a benefit for hunters as well.

“The hunting community likes it because they know whether or not they’re breaking the law,” Coley said. “Most of the time when people trespass, it’s unintentional. They didn’t realize where property lines were. This is a great way to mark things easily.”

If Ohio passes the bill, it would become one of a dozen states that allows paint to be used to mark property against trespassing. Most states also use purple as the paint color, but others require a fluorescent paint be used.

Pennsylvania became the most recent state to enact a purple paint law. The Pennsylvania Farm Bureau strongly advocated for the legislation that went into effect on Jan. 26.