HAYESVILLE, Ohio — There was a sense of awe and fascination when Ivan Stoltzfus, of Honey Brook, Pa. started his 1948 John Deere A tractor for a crowd gathered outside the Hayesville Fire Department May 13.

The beautifully restored tractor let out the kind of slow, deep putting sound that two-cylinder collectors know and love. But what was more fascinating, for the farmers and nonfarmers who came, was the 3,400-mile feat to which Stoltzfus has committed himself.

On April 26, he set out from the Atlantic Coast in New Jersey, heading for the Pacific Coast in northern California, all to raise funds for the Wounded Warrior Project, which goes to soldiers who were injured while on duty.

The trip is expected to take him at least three months to complete. Tuesday, May 13, he made a stop in Hayesville, a small town in Ashland County, to meet with supporters.

Stoltzfus farmed for about 30 years and now works as an auctioneer and real estate broker. Recently, he felt the need to give back to his country and believed the Wounded Warriors to be a good way.

“I took my freedom for granted and I got to the age in my life — I was never in the military — and I felt like ‘I want to give back to this country,’” he said. “And there’s no better benefit than to the wounded warriors because I see them volunteering. They love our country — they love us so much — and end up paying the ultimate price for us.”

Stoltzfus said he is enjoying his trip so far and the many people he’s met along the way. He’s become somewhat of a media sensation, and has been interviewed by some big-name network stations. 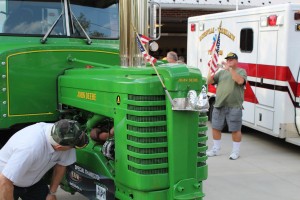 At night, he sleeps in a trailer towed behind the tractor. The tractor, which he has notoriously named “Johnabilt,” was retrofitted with a Peterbilt semi cab by his son-in-law, to protect Ivan from the elements.

But the tractor is mostly original. He can reach speeds of up to 17 mph, but usually travels at 14 mph, to go easy on the tractor.
His daughter, Tina Martin, is coordinating the public relations part of the project — something that has been very active in recent weeks.

“What you’re doing (is) you’re raising awareness and we never ever should forget what our wounded warriors have done for us in the fight against terrorism,” Gibbs said, recalling his own visits with soldiers at the Walter Reed National Military Medical Center. “I’ve got to tell you — the morale is unbelievable.”

Ohio Rep. Dave Hall, R-Millersburg, sent a letter, calling Stoltzfus a “conscientious and compassionate American” whose achievement is “both ambitious and remarkable.” 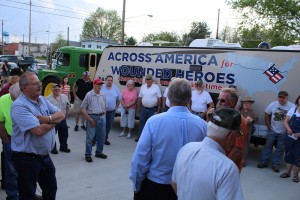 The Hayesville event was organized in part by the Ashland County Yesteryear Machinery Club, and some local Republican campaign groups.

Paul Lifer, vice president of the tractor club, has driven old tractors for several hours in a day  — but nothing like Ivan is doing.

Don Herr, a World War II veteran from Ashland, came to watch the speech and interact with friends.

Ivan is being followed on the trip by close friend Dave Stoltzfus (no relation), who is following on a bicycle. The two work together to coordinate public events and to keep their own supplies in order — like food and water.

Ivan’s next scheduled stop will be May 21 at the AAA Auction Service in New Haven, Ind., where he will participate in a fundraiser auction for wounded warriors. 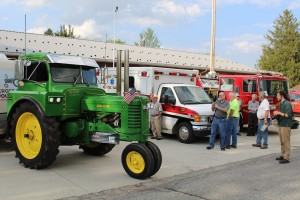 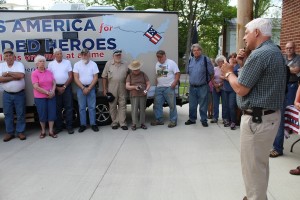