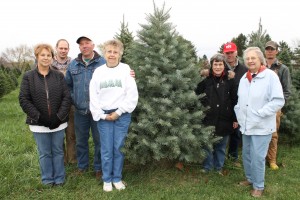 SHREVE, Ohio — Wayne County Christmas tree farmer Joel Berry has been growing trees on the family farm since the mid 1970s. He’s become a well-known supplier to buyers across the region, but this year, he reached a new height by winning the People’s Choice Award at the Ohio State Fair in Columbus.

Berry’s winning tree was a concolor fir — a pyramidal-shaped tree similar in appearance to the Colorado blue spruce. It’s an attractive tree, but one that is still catching on in popularity.

“I just threw my hat in the ring this year because we had lots of nice concolor fir on the farm and there are very, very few that are displayed at the state fair,” Berry said.

The 155-acre farm has been in the family since the 1930s, but Joel and his father, Russell Berry, 95, decided to introduce Christmas trees in the 1970s after Joel received his forestry degree from Ohio State University.

It was an idea that took some time to catch on — the trees must grow six to 10 years before they are ready to sell. But the hilly, well-drained soil has worked well for the Berrys, and their family-run business now spans 35-plus years.

Joel’s son, Scott, helps on the farm, along with Ricky Neal. The work is year-round, but is busiest November through December.

The family sells between 1,000-1,500 Christmas trees a year and provides saws so families can select and cut their own. They also prepare wreaths and other Christmas decorations, which they sell from the farm.

The family also provides pre-cut and balled and burlap trees. The selection includes classic pines and spruces as well as a large selection of firs, spread across 40 well-kept acres.

Decorations, such as Christmas wreaths, are also very popular. Doris Troutman, who lives nearby, has helped make wreaths since 1992. Last year, she helped make more than 300.

Joel’s wife, Doranna, also helps with the farm and selling wreaths. The couple were married in 1975 and began selling trees about a year later.

When visitors come, they’re treated to a scenic display of live Christmas trees, and the option to cut their own.

After they’ve found the one they want, they can warm up with some refreshments, furnished in part by Joel’s brother, Jack Berry. Jack manages a 35-tree apple orchard and the apples are used to make cider. Donations for the snacks benefit the Shreve Christian Church.

Although most of the work on a Christmas tree farm is seasonal, Joel stays busy year-round as a professional forestry consultant. He offers consulting on timber appraisals and sales, forest management and tree planting.

And this past year was anything but dull, given the record drought that damaged grain crops, as well as Christmas trees. Joel said some growers lost as much as 70 percent of their trees and many, like him, were not set up to irrigate.

“You have to take care of those trees every year” they’re in the ground, Joel said, adding “we did lose a lot.”

But some of his varieties are more drought resistant and it’s clear from the hillsides at the farm, that Twinsberry still has a good crop of green, fresh trees.

Joel is an active member of the Ohio Christmas Tree Association. The Christmas tree industry is competitive when it comes to sales, he said, but growers work together to share ideas, especially during difficult times.”We are a group of growers who get together to help each other to grow trees,” he said. “Yes, it’s competitive, but we all kind of chime in on what works for other people.”

Joel said he’s seeing a steady increase in demand since the economic crash of 2008, and is hopeful demand will continue to grow.