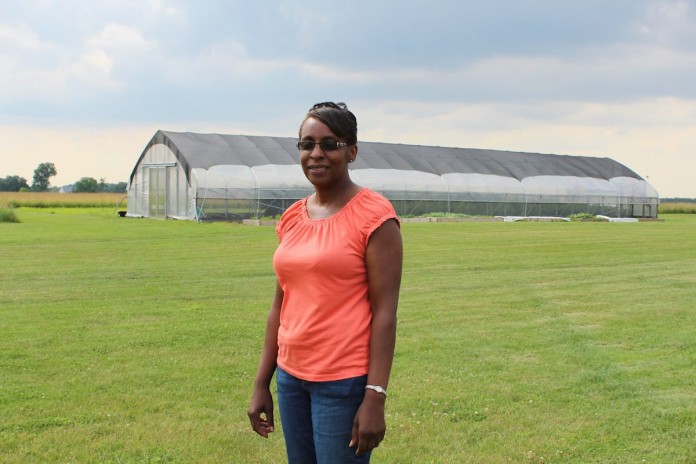 MANSFIELD, Ohio — Fresh foods and gardening have always been a part of Pam Mack’s life, but over the past few years, she’s also made them a lifestyle.

In fact, you could say the produce she grows today supports life itself — for her family and for her customers.

Recently retired from a position with the state, Mack completed some research and education and launched her own produce business: L Marie Ltd.

She grows tomatoes, zucchini, cucumbers, carrots, herbs and more, and is certified organic. About three years ago, she had a large, 92-feet by 24-feet “high tunnel” built on her family’s five-acre Richland County lot, and she has plenty of space to put up another, if she chooses.

But Mack’s story is much more than a new business.

She got into produce largely because of some family health issues. She lost a daughter, LaShawnda Marie, to complications of lupus in 2006. Lupus is a chronic inflammatory disease that occurs when the body’s immune system attacks its tissues and organs. It can also affect joints.

LaShawnda was just 25, and she left behind three young boys.

Although Mack does not have lupus, she and her family have a history of health and immunity issues.
As a result, she studied lupus and other health conditions, and found that one of the ways people went into remission was by healthy eating.

So it was for Mack’s own health. After retirement, she found herself in a situation where “my (medical) numbers were so high that I was reaching a danger zone.”

Medications weren’t helping her, she said, and she was at the point where she felt if she was to live a full life, she would need to improve her diet.

“It was what I was eating that did the trick for me,” she said. “As long as I ate right, my numbers stayed down.”

Being healthy is important to Mack, who, along with her significant other, Thomas, now has the responsibility of raising her daughter’s children.

She wants to be a part of their lives, and her other family and the community.

Mack was the featured speaker at the Northeast Ohio Agribusiness Breakfast June 27, hosted by the Braintree Business Development Center. In addition to the health benefits of fresh and organic produce, she talked about how she entered the business post-retirement.

First, she had a strong heritage. Her mother canned and her father was an “amazing cook.” She learned from her parents, and over the years, she continued to garden and grow vegetables.

She also continued her education. In addition to holding a bachelor of science in organizational management, she recently completed an entrepreneurship program at North Central State College, in May.

Heather Tsavaris, who taught the one-year certificate program, said it helps students develop their business plan. Some students are launching new businesses, while others are evaluating what to do with an existing business.

Tsavaris said Mack entered the class a little bit skeptical about what it would do for her.

By the end of the year, “we were able to kind of blow her goals out of the water,” Tsavaris said. “For her, it was broadening what she thought was possible.” 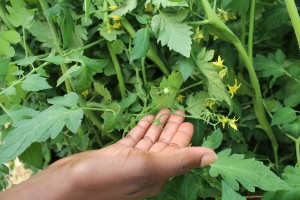 The program also helps students to identify markets and customers, and to improve their accounting and marketing skills.
Mack is also as master gardener and volunteers at the Kingwood Center gardens in Mansfield — a cultural and historical landmark.

On top of that, she completed an online food science class on canning, through the University of California, Davis. The class is a requirement, because she wants to sell a canned value-added product: chutney.

Mack got started with Braintree about three years ago.

“They’re the ones who started the ball rolling, so-to-speak,” she said. “They were my first base.”

Braintree helped her to get involved with the Richland Community Development Group, and helped her build connections as she planned and built her business. 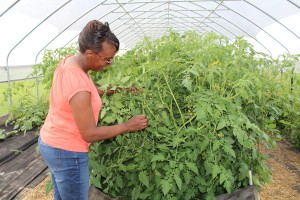 Bob Leach, Braintree coordinator, said Mack has done a good job of taking information she’s been given. But more than just taking it, he said Mack “is smart enough to research it herself and determine herself what fits into what she’s doing.”
Too many times, Leach said entrepreneurs get tunnel vision.

Mack, on the other hand, “has taken everybody’s advice and leveraged community resources.”

Her growth has been steady, and well planned. She currently sells at the North End Farmers Market, in Mansfield, and hopes that as demand grows, so will her business.

She gets help from Thomas, whose family has a crop and livestock farm in the area, as well as her grandchildren.

Some days, she only has to work a few hours, and other days, she starts early in the morning and finishes late in the evening.
Growing and selling produce is a good post-retirement job for Mack, because she loves what she does. And that’s important for anyone considering a similar business, she said, because without loving what she does, she couldn’t do it.

She’s concerned about being profitable and sustainable, but at the same time, “my main goal is to provide healthy food to individuals who want it.”

To learn more about L Marie Ltd., visit them on Facebook. You can also reach them at lmarieltd@gmail.com.

For more about the entrepreneur program at North Central State, and similar programs, contact Assistant Business Dean Lynn Jones, at 419-755-4572. 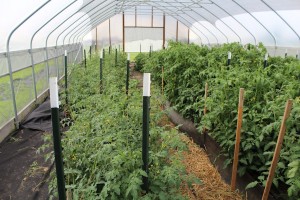