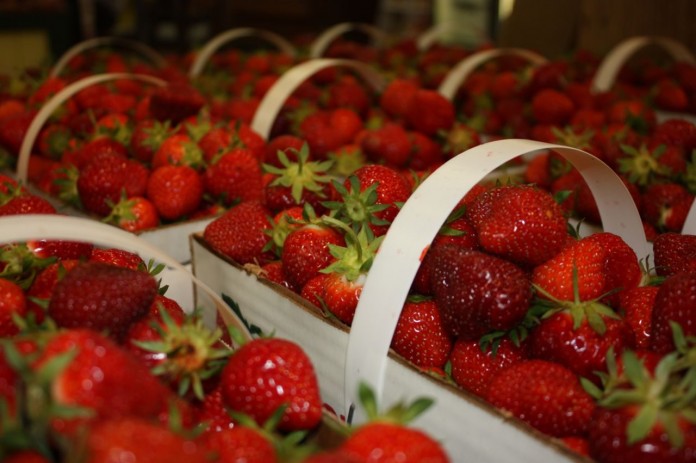 UNIVERSITY PARK, Pa. — June marks the start of what many in the northeast believe is the sweetest part of summer — berry season.

It’s a time ripe with strawberry festivals, pick-your-own-berries and local farmers’ markets. For berry lovers and local farmers, the season is much too short — usually, about one month of strawberry harvest and another for fresh, local raspberries — a span of time researchers at Penn State’s College of Agricultural Sciences are working to extend.

“National demand for fresh strawberries and raspberries is strong and growing, but most domestic production occurs in select regions of the United States with the most suited climate,” said Kathleen Demchak, senior extension associate in the Department of Plant Science.

“Growers in the Northeast are in a great position geographically to supply more berries to consumers. But our growing season is short, temperatures are variable and rainy weather during harvest can be a big problem.”

Demchak and colleague, Bill Lamont, professor of vegetable crops, are among a group of researchers examining how the use of high and low tunnels and plastic coverings extend the growing season for strawberries and raspberries, and as a result, increase yields while also reducing pesticide use and improving berry quality and shelf-life.

Their goal is to help local farmers improve productivity, profitability and product while increasing the quantity and quality for consumers.

“Twenty-five years ago, the average American consumed about two pounds of berries a year. Today, that amount is about eight pounds per year, and that’s a remarkable increase,” Demchak said, referencing USDA statistics.

She believes the increase in demand is due, in part, to reported health benefits of berries in reducing heart attack risk, protecting against some cancers and helping with weight control, among others. Among the national health organizations on the berry bandwagon is the American Diabetes Association, which puts berries on its Top 10 Superfoods List because they are low in sugar and packed with vitamins, antioxidants and fiber.

Ninety percent of strawberries grown in the U.S. come from California, a state that has optimal year-round growing conditions. On a similar note, raspberry production is most concentrated in California, Washington and Oregon.

For the majority of the year, most of these berries found in grocery stores are shipped from those states. That sometimes can lead to not-so-sweet consequences, noted Demchak.

“Overall, berries in grocery stores are of high quality. But, strawberries and raspberries are fragile and susceptible to diseases, which can result in moldy berries soon after consumers bring them home from the grocery store,” she said. “Shipping time, storage methods and produce-aisle conditions can influence freshness.”

Many consumers prefer fresh, locally grown berries, and that leaves some living in the Midwest and Northeast wanting for much of the year. With that fact serving as a catalyst, Demchak and Lamont connected with a group of like-minded plant scientists from several universities — Michigan State, Cornell, Rutgers, Minnesota, New Hampshire, Vermont — to come up with a solution.

The first part of their research focused on the use of high and low tunnels and berry growth.

“While the benefits of high tunnels were well-demonstrated here at Penn State on many crops, including berries, over the last 20 years, we wanted to study further what kind of difference we would realize in our berry crops,” Demchak said. Their current project, in its third year with two years to go, is already yielding positive results.

Tunnels, also known as hoop greenhouses, are covered with plastic film. While tunnels share the same purpose as traditional greenhouses, they differ in a few important ways — they are less expensive to build, they do not have a constructed floor and plants are usually planted directly in the soil, as in field production.

At the Horticulture Research Farm at Penn State, Demchak, Lamont and colleague Mike Orzolek have grown a wide variety of crops in 32 high tunnels (6 feet or higher), launching a widespread adoption of season-extension technologies by growers.

Over the years, Demchak and her colleagues found that with a combination of the right cultivars and season-extension technologies, they could extend the strawberry production season from four weeks to at least five months, and the raspberry harvest season from three to four weeks to four months, albeit with a few peaks and dips in production.

Yield of strawberries doubled, and yields of raspberries doubled, tripled or quadrupled compared to the field, depending on production methods. In addition, they eliminated the use of pesticides, relying totally on natural enemies for pest control, while improving the quality and shelf-life of both berries.

Encouraged by the tunnel data, the researchers now are improving their strategies by studying the effects of various tunnel coverings infused with ultraviolet (UV) light blockers and stabilizers and infrared (IR) light blockers.

“As technologies involving plastics advance, a wide range of plastic choices for tunnels has become available,” Demchak said. “We currently are looking at five types of plastic with a wide range of light transmittance characteristics in the UV and IR ranges, both on high tunnels and low tunnels in the field, and the effects on plant, insect and disease response.”

She explained that plants react to UV light by producing anthocyanins, which shield the plant from some of the harmful rays. These compounds make blueberries blue and strawberries red, and they also often are categorized as antioxidants.

In addition, though UV-A light is not visible to humans, it can be seen by many insects — in fact, many of them use UV wavelengths for vision. Various types of fungi also can sense its presence and use it as a cue for sporulation.

And these two things can have a detrimental effect on berries.

“Therefore, if we can control UV light in the tunnels by channeling its positive effects and limiting the negative, we hope to see an improvement in growth and reduction of disease,” Demchak said.

At the same time, Demchak and her colleagues are documenting infrared effects in relationship to plastic use and temperature control. Infrared radiation wavelengths are what people feel as heat.

Raspberries and strawberries grow best under cool temperatures and actually stop flowering during spells of hot temperatures in the summer. Whether improved flowering and fruiting can be achieved by using a type of plastic remains to be seen, but the team should know after this harvest.

That being noted, Demchak is optimistic about what the future holds.

“The methods we’re testing show great promise and have the potential to help farmers and consumers alike. It’s very exciting research,” she said.