MANSFIELD, Ohio — I’ve operated a chain saw since I was about 12. Growing up on a farm, my dad, brother and I occasionally needed to cut up trees that had fallen into fields, or trees that had grown over fences and property lines between our farm and the neighbors’.

We also cut wood to heat our home, so I had a good upbringing in using a saw — sort of.

I learned such things as how to mix the fuel properly, how to hold the saw level when cutting and how to predict and avoid pinches (those pressure points in the limb that clamp down on the saw, trapping it into place).

I also learned about kick-back — the sudden, violent force that can push the saw backward, toward the operator, usually caused by mishandling the tip of the saw, or bumping the tip against an unseen piece of wood.

I remember hearing about a time when my grandfather had his hat removed by a kick-back, because the saw came back toward him and nicked the bill of his hat.

He didn’t stop cutting, but I imagine he stopped to think, even if it was only long enough to put his hat back on.

My own experience with chain saws is probably a lot like other people who grew up in a rural setting. We own a saw or two, or somebody we know owns one, and we generally know how to operate them. But at the same time, we only know the things we’ve been taught.

On June 6, I had the chance to listen to a professional sawyer and logger go over the safety points of using a chain saw, and I saw hands-on how to make good, safe cuts, including how to fell a tree.

By “professional,” I mean a guy who spent his career working in forestry and logging, including as a sawyer for the Ohio Department of Natural Resources.

Ed Faris, who spent nearly 30 years working for ODNR, showed a class that included myself, the do’s and don’ts of proper chain saw use.

The first part of the workshop was held inside a classroom at the Ohio State University-Mansfield Campus. Using one of his own saws, some extra chains, and a few basic tools — he explained to us the basic parts of the saw, how they work and how they should be maintained.

The first thing — and this is common sense, but often overlooked — is to make sure everything is in place, including all the bolts, guards and especially the safety parts, like the chain brake (the part that stops the saw during kick-back) and the chain catcher (the part that helps catch the chain if it comes off the saw while running). 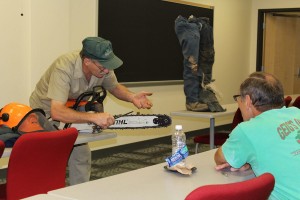 With all the action a chain saw sees, it’s easy for something to come loose or to wear, and it’s important to give the saw a quick visual inspection each time you use it.

Faris also reminded us to keep the saw clean, especially the parts around the engine like the flywheel and the filter. This made me think about my own saw, which has quite a bit of sawdust and oil buildup around the flywheel. As Faris correctly explained, it’s important to keep these parts clean so the saw does not overheat, and so it gets plenty of fresh air.

I do a pretty good job of keeping the air filter clean, but he pointed something out I hadn’t thought of. According to Faris, using an air compressor to blow the filter clean can easily damage the filter by creating tiny, unwanted holes.

Instead, he recommends taking the filter off of the saw, tapping it against a hard object a couple times, and brushing it lightly with a toothbrush.

He also reminded everyone to check the condition of their muffler. This is an OSHA requirement and helps make the saw run more quietly, and it also helps prevent forest fires.

Of course, a saw also needs the right fluids. This includes correctly blended fuel, and a good quality bar oil. For fuel, he recommends using 89 octane, blended with the appropriate two-cycle oil, at the “exact” rate specified in the owner’s manual.

Today’s saw engines are so precisely built, according to Faris, that the fuel must be precisely blended to each saw’s requirements.

I know that sounds like common sense, and it is, but as Faris pointed out, people damage and ruin their saws all the time by not following these same rules.

Some of the things that are not as common — at least not to those of us who grew up around dad’s farm saw — is the safety apparel.

Faris demonstrated the importance of face shields and hard hats — two things my family never wore, but probably should have. He told us that he’s been hit on his hard hat twice while cutting, one time leaving a large dent in his hat and requiring him to miss work.

“I’m no mathematician or anything like that,” he said. “But I do know if you’ve got a 10-pound chunk of wood falling out of the tree, by the time it gets to the ground 50 feet away, it’s hauling!”

The face shield, which is sold by most major chain saw retailers, helps keep the dust out of your face, as well as debris. If not wearing a face shield, Faris recommends at least wearing safety glasses.

“You’ve only got two eyes,” he said. “You don’t really want to lose either one of them.”

He also recommends wearing ear protection, whether earplugs or earmuffs. These help protect your hearing, and also reduce operator fatigue.

Lastly, the clothing in general should be tight-fitting and the operator should always wear a good pair of chain saw chaps — strap-on chaps that are designed to stop a chain saw before it reaches the operator’s leg.

Faris said he wears his chaps every time he operates his saw.

“It doesn’t matter how small that job is,” he said. “All it takes is one little mistake and it can get you.”

Take it or leave it

If his advice sounds kind of blunt — it’s probably because it is.

Faris explained things with a matter-of-fact style of teaching. He didn’t preach to us or try to scare us — he just showed us the facts and let us decide for ourselves.

This was most clear when he showed a mannequin with one leg badly cut from a saw mishap, and the other leg unharmed because that leg was clothed in chaps.

“The average chain saw injury requires 100 stitches,” he said. “So there’s somebody getting 300-400, if others are getting 35. They’re (chain saws) the most dangerous power tool you can probably get a hold of.”

I bought myself a pair of chain saw chaps about three years ago. The thing I like most, in addition to knowing that I’m protected, is how comfortable they are. The chaps are easy to strap on and remove, they bend easy at the knees and they actually help keep me warm on windy days.

When it comes to safety gear, I don’t mind wearing it, but it has to be something that is comfortable, and that doesn’t interfere with the job.

The safety glasses that I wear are fog-resistant, and because they fog up less, I’m more likely to keep them on. I’ve also found a good pair of earmuffs that I like. They’re big and they’re black — and yes they stand out and I get jokes thrown my way — but they serve a purpose.

Not only are my ears being protected, but I feel less tired and wore out at the end of the day, because I’m not hearing all that noise!

The last thing Faris showed us — and this is the most dangerous — is how to safely fell a tree. We went outdoors for this part of the lecture and found a large tree that needed to come down.

First, he made sure that nothing was in the way of the tree, including young trees that he wanted to protect from the fall. Then, he cleared all the brush and saplings nearest the trunk, so he would have an open, secure place to work.

He also made sure he had a couple escape routes, so he could get back from the trunk once the tree began to fall.

His first cut was the open face notch. The notch is what gives the tree room to move as it falls, and is usually made in the direction you expect the tree to fall. He made the top cut first, cutting at an angle of about 45 degrees, and then he made his bottom cut, cutting at roughly the same angle.

The rule is to make the width of the notch at least 70 degrees, so that when the tree falls, it has plenty of space to tilt and to fall off of the stump.

Secondly, he created the “hinge.” The hinge is a thin strip of wood on which the tree bends as it comes down.

In the past, most people, including myself, created the hinge by just cutting in from the back side of the notch , until the hinge became thin enough that the tree started to fall. A safer way, Faris explained, is something called “bore cutting.”

Once the hinge size is determined, you bore the tip of the saw perpendicularly into the tree, creating the thickness of your hinge, and then you carefully cut toward the back of the tree, leaving a sufficient piece of holding wood in front.

The last step, once the bore cut has been made and the hinge has been created, is to remove the holding wood in front, which allows the tree to begin falling on its hinge.

As soon as the tree begins to fall, “that’s the time to boogie,” Faris said.

The operator should set the saw’s brake, shut it off and depart several feet from the trunk, just in case something unexpected happens.

While there are certainly other tips and suggestions, this workshop covered the basics and was a good reminder of chain saw safety. Faris covers more details in level I and level II training, including additional felling techniques.

The main thing, he said, is that people need to use the knowledge they already have, and to be open to learning new skills.

“It’s a hazardous experience,” he said. “That’s why you’ve got to use all of your experience and all you can get from somebody else.”

And, you can never learn too much — especially when the safety equipment and cutting techniques change.

If you’re new to chain saws, or you’re interested in learning more about how to be safe with this dangerous power tool, you should consider attending a workshop. You’ll be surprised what you learn, and it might one day save your limb, or your life.