SALEM, Ohio — The number of wells waiting to be fracked outnumbered the number of permits issued by the Ohio Department of Natural Resources during September.

There are 57 Utica shale wells in Ohio waiting to be fracked, according to the most current report.

Hydraulic fracturing, or fracking, is a process commonly used in oil development. It is a technique that cracks open rock layers to free natural gas.

There were a total of 23 permits issued during September by the ODNR.

There were five permits issued for Carroll Count sites in September: four in Loudon Township on what appears to be separate properties, and one in Harrison Township. All of the permits were issued to Chesapeake Exploration, LLC.

Gulfport Energy Corporation was issued a permit in Somerset Township in Belmont County.

The permit issued in Holmes County was issued for a site in Salt Creek Township to Devon Energy Production.

In Mahoning County, the permit was issued in Jackson Township to CNX Gas Company, LLC.

And in Monroe County, a permit was issued in Franklin Township to Hall Drilling, LLC.

Three permits were issued each in Portage and Harrison counties.

In Portage County, permits were issued in Garrettsville Township to Mountaineer Keystone LLC on the same property.

And in Harrison County, two permits were issued in Nottingham Township to Gulfport Energy Corporation and one in Franklin Township to Hess Ohio Development LLC.

Two permits were issued in both Columbiana and Coshocton counties.

In Columbiana County, there were permits issued in Center and Salem townships, both to Chesapeake Exploration, LLC.

There are now a total of 382 permits issued in Ohio and 144 Utica shale wells drilled.

In Pennsylvania, there were a total of 198 permits issued, according to the Department of Environmental Protection. Of those, 186 were issued for new wells and 12 were issued granting permission to drill deeper.

The SPUD report, released by the Department of Environmental Protection, states there were 144 wells actually drilled during September.

SPUD, according to the definition in the oil and gas industry, means the process of beginning to drill a well.

The report estimates that there is 38 trillion cubic feet of undiscovered recoverable natural gas.

This may seem like a lot of natural gas, but the Utica appears to have smaller deposits than other formations.

According to the report, the Marcellus shale, which runs through a large portion of Pennsylvania and New York, is estimated to have 84 trillion cubic feet of natural gas.

According to its website, USGS is the only provider of publicly available estimates of undiscovered technically recoverable oil and gas resources of onshore lands and offshore state waters.

Make sure to click the graphic below to view it full-size. 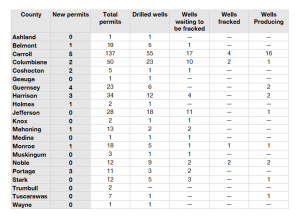 Changes to ride inspections because of Tyler’s Law in Ohio