These are the sounds as you walk into the horseshoe throwing competition at the Pennsylvania Farm Show.

“The sound of the ringer, that is just awesome,” said Emily Hatrick,15, of West Grove, Pa.

Hatrick and David Young, 71, of Howard, Pa., are at two ends of the experience spectrum, but both were named two of the champions at the horseshoe pitching contest.

Hatrick was the top junior pitcher at the Farm Show, and won the junior champion shootout for the fourth year.

Rated as the No. 17 female pitcher in the world, she tries to pitch in a tournament every weekend. She is a member of the National Horseshoe Pitching Association.

She has been pitching since she was 8 when her dad, Kelly Hatrick, taught her how to play. It’s a family tradition, with her grandfather teaching her father when he was younger. 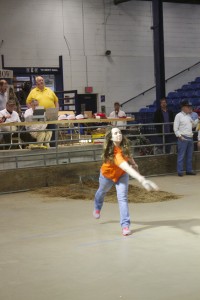 “He has helped me get through all of it,” said Hatrick. He has been by my side encouraging me and telling me I can do it.”

Now, Hatrick has two goals: One, to beat her dad; and, two, to attend the World Horseshoe Pitching Championship in Buffalo, N.Y. in August.

“My goals make me work harder,” said Hatrick. “Pitching is not something I have to do. It’s what I want to do.”

She is quick to point out that she is not a fan of practicing, but feeds on the adrenaline that comes from getting a ringer.

She’s trying to practice more because of her plans to compete in the World Horseshoe Pitching Competition.

She said that most of the time she pitches against adults because there isn’t a lot of youth competitions, but she encourages youth who want to participate to attend a contest.

“It makes me feel more confident, it helps me try harder,” said Hatrick.

She explained that players who are new to the game can compete in a higher level of competition because new players will receive a handicap, which will help in scoring but makes the competition equal for everyone involved.

Meanwhile, Young is also an avid horseshoe pitching competitor and agreed the sound of hearing a ringer is what brings the smile to his face as well.

Young has been competing for only the past four years in sanctioned tournaments, but he is already a champion.

He said he got interested in pitching after his wife died in 2007 and he retired.

“I was looking for something to do to fill my time and now I really enjoy it,” said Young.

He brought home the title of 30-foot Pennsylvania Farm Show Horseshoe Pitching Competition. It was his first year in this class.

That’s not where Young’s reign of championships begin.

Young was named the 40-foot horseshoe pitching state champion the past two years.

He said the camaraderie and the desire to do his best are what makes the competition worthwhile.

Young competes around Pennsylvania throughout the year. However, his goal is to attend the World Championship Horseshoe Pitching competition in Buffalo, N.Y. next August as well.

Both Young and Hatrick said the competition won’t be stopping anytime soon for either of them.The sounds of “clink, clink, clink, ‘that’s a ringer’” is worth the sacrifices they make to attend their weekend competitions.