Net farm income, a measurement of profitability, is forecasted at $90.1 billion nationally, down 14.6 percent from 2015.

If these projected numbers are realized, 2016 net farm income would be the lowest since 2009 in both real and nominal terms.

Overall, national cash receipts are forecast to fall to $23.4 billion, down 6.2 percent in 2016, and a 12.3 percent drop in animal/animal product receipts. Crop receipts are essentially unchanged from 2015.

Nearly all major animal specialties — including dairy, meat animals, and poultry/eggs — are forecast to have lower receipts nationally.

“It is tough times in this part of the country,” said Jayson Harper, professor of agricultural economics at Pennsylvania State University. “Because of our strong dollar, international trade for animal producers has gone down. Dairy has especially seen the hit. For the crop producers, it has been a little better story.”

The strong dollar affects anything we are exporting — if countries can get it somewhere else for cheaper, they will, said Harper.

Net cash farm income is forecast up for farm businesses specializing in mixed grains, up 10.4 percent; corn, up 15.1 percent; and soybeans, up 11.8 percent.

After sharp declines in 2015, average net cash farm income for most farm businesses specializing in crop production is expected to improve, based on USDA reports.

A decline in spending on fuels and oils is expected for the second consecutive year, with the U.S. Energy Information Agency expecting diesel and gasoline prices down over 15 percent in 2016.

“Low prices of energy is assisting in lowering inputs, but it is a domino effect. If we tracked costs one-to-one versus profits, we will see costs have gone down, but commodity prices have cratered,” Harper said.

Farm asset values are forecast to decline by 2.1 percent in 2016, and farm debt is forecast to increase by 5.2 percent.

Pennsylvania products and the percentage of the 2016 cash receipts

Labor costs are forecast to increase in 2016 by 5.4 percent, still slightly below 2014 highs, after dipping in 2015. Wage rate increases are putting pressure on hired labor costs.

“Farmers tend to see where they can make cuts and make do. Many have a big asset base in land and machinery to help weather the storm.”

A decrease in herd sizes — dairy, beef and hogs — will eventually cause the prices to rebound, said Harper.

Ohio net farm income is expected to dip by nearly half a million from less than $1.2 billion from $1.7 billion.

“Any time the dollar is strong, it is going to be bad for agriculture, because of the world market,” Harper said. “The strength of the dollar isn’t going anywhere and therefore the farm stress will continue in 2017.”

Poultry receipts are likely to be back on track in 2016 after rebounding from the effects of avian influenza in 2015, with growth continuing in 2017. Poultry and egg receipts are up in Pennsylvania, Indiana, Ohio, West Virginia and New York.

In Pennsylvania, dairy profits have fallen by nearly a billion from a year ago to $1.9 billion in net profits from $2.7 billion in 2015

Energy costs have remained low and feed prices have moderated, she said, “but most dairy farms are losing money.”

Shoemaker organizes a report for the Ohio Farm Business Summary each year, surveying 40 dairy enterprises in northeast Ohio with a wide range of herd sizes.

Ohio products and the percentage of the 2016 cash receipts

Ohio’s animals and products cash receipts nearly break even around $4.1 billion, thanks to the egg industry increase, as the dairy cash receipts are down to just under $1 billion from $1.3 billion.

New York’s stats also model the trend, with the value of agricultural production down to $6 billion from more than $7 billion in 2015

“We are subject to influences beyond our borders. With the strong dollar, it is harder for us to export more product,” Shoemaker said.

Experts don’t see much change in net profits for 2017.

“This isn’t the first time we have dealt with these issues. They will certainly turn around,” Harper said.. There will have to be policy put in place to help cope; and there are safety nets in place for some of the shortfalls.”

Find the complete reports at https://data.ers.usda.gov. 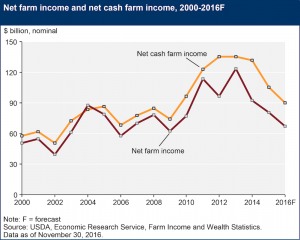