WASHINGTON — The U.S. Department of Agriculture (USDA) is trimming its budget, and is closing and/or consolidating more than 200 local and regional offices across all of its agencies.

“The USDA, like families and businesses across the country, cannot continue to operate like we did 50 years ago,” said Vilsack. “We must innovate, modernize, and be better stewards of the taxpayers’ dollars.”

“The department is finding significant savings by consolidating more than 200 offices across the country,” he said.

The USDA will close 259 domestic offices, facilities and labs across the country, as well as seven foreign offices.

In some cases, Vilsack explained, offices are no longer staffed or have a very small staff of one or two people; many are within 20 miles of other USDA offices.
In other cases, technology improvements, advanced service centers, and broadband service have reduced some need for brick and mortar facilities, he said.
When fully implemented, these actions along with other recommended changes will provide efficiencies valued at about $150 million annually.

Plans to close or consolidate facility, office and lab operations will impact USDA headquarters in Washington and in 46 states and one U.S. territory.

In addition, USDA is implementing a series of other changes to eliminate redundancies and inefficiencies, including the consolidation of more than 700 cell phone plans into about 10.

(Scroll to bottom for map of all U.S. counties affected by closures.)

— 31 field offices of the Food, Nutrition and Consumer Services in 28 states, including offices in Cincinnati and Columbus, Ohio; Harrisburg and Pittsburgh, Pa.; Grand Rapids, Mich.; and Charleston, W.Va.

— 15 offices of the Animal and Plant Health Inspection Service in 11 states, including: Indianapolis and West Lafayette, Ind.; and Bowling Green, Ohio. International APHIS offices will be closed in Burma, Cambodia, Colombia, Indonesia and Laos.

— 43 area and sub-offices of the Rural Development program in 17 states, including Juniata County, Pennsylvania; and Monroe, Tippecanoe, LaPorte and Marshall counties in Indiana. 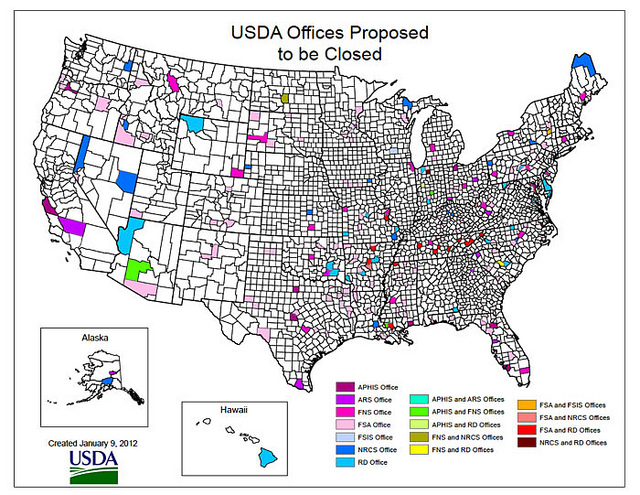