SALEM, Ohio — Loudon, East and Washington townships appear to be some of the hottest spots in Carroll County.

Carroll County led the state of Ohio for the number of Utica shale permits issued during February, according to the Ohio Department of Natural Resources.

Two permits were also issued in Carroll County’s Union Township and one in Augusta Township during February, according to the ODNR.

All of the permits issued during February in Carroll County were to Chesapeake Exploration LLC.

Guernsey County was next in line for the number of Utica shale permits issued last month. A total of five permits were issued for one site in Millwood Township to R.E. Gas Development LLC and a single permit was issued in Valley Township to EQT Production Company.

Drilling appears to be ramping up in Noble County, as four permits were issued for sites there.

A single permit was also issued to Gulfport Energy Corporation in Moorefield Township.

In Monroe County, two permits were issued for one well site in Seneca Township to the Antero Reserve Appalachian Corporation.

One permit was issued in Columbiana County in Center Township to Chesapeake Exploration LLC.

And in Trumbull County, a Halcon Operations Company LLC well site in Lordstown has not only been permitted and drilled but it was also fracked. 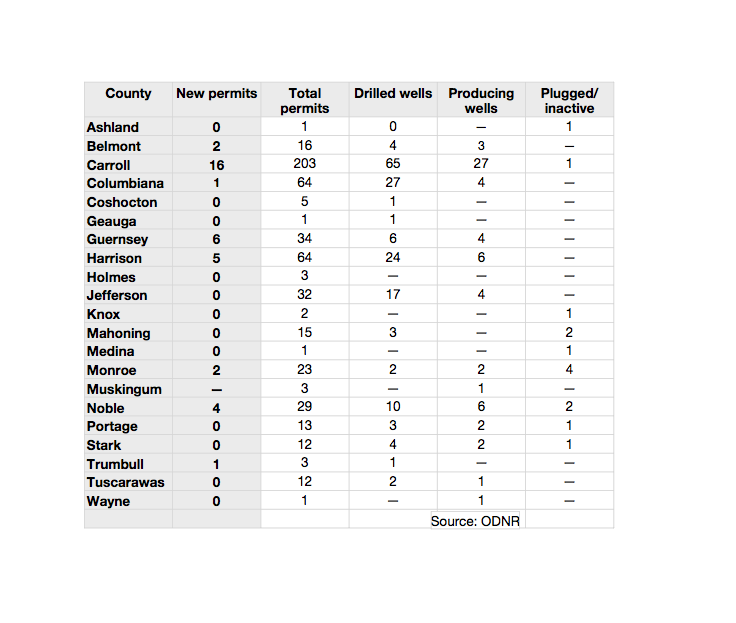 Not too far behind was Washington County. According to the Pennsylvania Department of Environmental Protection, there were 35 permits issued there in February, and 32 in Susquehanna County.
There were six permits issued in Beaver County, seven in Butler and 16 in Greene County, according to the well permit report issued by the DEP.

Meanwhile, the number of shale wells drilled increased by a total of 69, during February. The DEP reported there were 13 drilled in Washington; 10 in Susquehanna and 10 in Greene; seven in Butler; five in Bradford; two in Mercer; and one each in Allegheny and Beaver counties.

Chesapeake Appalachia, LLC, continues to be drilling in West Virginia. In Ohio County, the West Virginia Department of Environmental Protection reported there were six permits issued to three different landowners during February. The wells are slated to be drilled on the Charles and Dorothy Frye Farm, Clarence S. Farmer Sr. and Charlotte Farmer, and land owned by G.W. Rentals LLC.

The DEP also reported there were permits issued in Marshall County to two separate landowners. Chesapeake Appalachia, LLC received permits for the Shelly A. and David W. Reinbeau property, and Noble Energy Inc. was issued permits for land owned by the Consolidation Coal Company.

In Wetzel County, there were a total of eight permits issued to EQT Production Company from two landowners.

According to the DEP, there were four permits issued in Tyler County to Jaybee Oil and Gas; two in Marion County to Trans Energy Inc. and one in Monongalia County to Northeast Natural Energy LLC.