SALEM, Ohio — The number of oil and gas well permits issued in April by the Ohio Department of Natural Resources was down substantially from a year ago.

In 2014, the Ohio Department of Natural Resources issued 54 permits during April. This April, the ODNR issued 19 permits.

Harrison and Monroe counties are leading the pack in April 2015. There were eight new permits issued by the ODNR in Harrison County last month. All of the permits were issued to American Energy Utica for two different well pads on two different properties. All of the wells will be located in Nottingham Township.
As of May 4, there were 340 total permits issued for Harrison County. So far 144 wells are producing, and 141 wells remain in some sort of the drilling phase.

The ODNR issued four permits in Monroe County during April. The permits were issued in Seneca Township to Antero Resources Corporation for one well pad.
The ODNR has issued 173 permits for the county since drilling in the Utica shale begin. There are 44 producing wells in Monroe County and 101 drilled wells.

Three permits were issued to Chesapeake Exploration by the ODNR for a well pad in Perry Township. As of May 4, there were 478 permits issued, with 354 producing wells and 65 drilled wells. 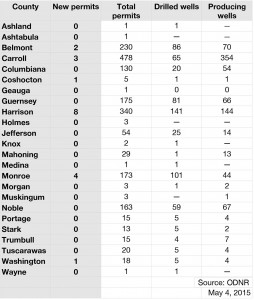 The ODNR issued one permit each in Washington and Coshocton counties.
The permit issued in Washington County was to Protege Energy III for a well pad in Fearing Township. As of recently, there are four producing wells and five wells drilled in the county.
The ODNR issued a single permit to Devon Energy Production Co. for a well to be located in Oxford Township, in

There is one producing well and one well that has been drilled, but is waiting infrastructure in order to get the products to the marketplace.
The ODNR reports there are now 1,883 permits issued for horizontal drilling in the Utica shale. As of May 4, 1,463 wells have been drilled in the Utica. There are 29 drilling rigs in the Ohio Utica working as of May 4.

There were no new permits issued for drilling in the Marcellus shale during April. The permit count remains at 44, with 29 wells drilled.

Bradford and Susquehanna counties did not fall from the top three counties for the number of permits issued. There were 26 permits issued in each county.
The DEP has issued 120 shale well permits in Bradford County, with 11 issued for new wells, five for permission to drill existing wells deeper and four permits for redrilling.
Bradford County is where the first shale well was drilled, and the boom originated in 2008.

In Susquehanna County, the DEP has issued 93 total permits during 2015, with 91 for new wells and two for existing wells to be drilled deeper.

The DEP issued permits for 25 new wells in Pennsylvania during April. So far, the DEP has issued 133 permits in Washington County in 2015. Of those, 100 were for new wells and 33 were for deeper wells to be drilled.

Three permits were issued during April in Beaver County. The DEP has issued 11 permits during 2015 for the county. Ten of those went for new wells and one was for permission to drill deeper.

In Lawrence County, the DEP issued seven permits for new shale wells in April. To date, the DEP has issued 18 permits for new wells, with a request to drill deeper than originally planned for two.

In all, the Pennsylvania DEP reported there were 185 permits issued during April. So far in 2015, the DEP has issued 786 permits with 683 for new wells, 99 for permission to drill deeper and four permits to redrill wells.

Marshall County appears to be leading the way in horizontal shale drilling in West Virginia, with permits issued for both the Utica and Marcellus shale, but Tyler County led April with the most permits issued, according to the West Virginia Department of Environmental Protection records.

Register for a guided tour of Pennsylvania game lands