Of the new drilling permits issued in May by the Ohio Department of Natural Resources, 17 permits were issued in Noble County. The permits were distributed in Center, Beaver and Marion townships.

There are 38 additional Noble County wells in either the drilling or “having been drilled” phase. They are awaiting infrastructure to get the oil and gas moving into pipelines. Most of the wells drilled are with Antero Resources and are located in Seneca Township.

The ODNR issued 12 new permits in Monroe County. Four permits were issued in Seneca Township to Antero Resources. One of the wells has already been drilled.

There are 33 wells being drilled and 12 wells are producing in Monroe County.

The ODNR issued 10 new permits in Harrison County during May. It brings the permit total there to 231.
American Energy Utica, the drilling company created by Aubrey McClendon after he left Chesapeake Exploration, is not wasting any time moving forward with drilling plans. The ODNR issued nine permits to AEU in Nottingham Township.

One additional permit was issued in German Township to Chesapeake Exploration.

There are now 87 wells either being drilled or that have been drilled. In addition, there are 57 wells producing in Harrison County. 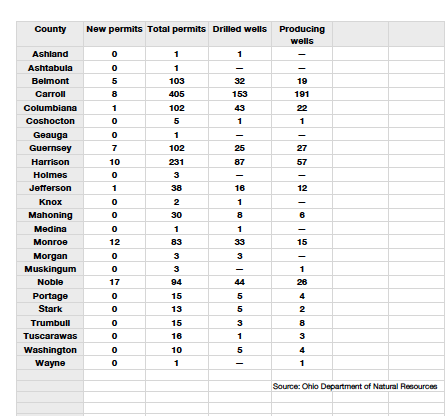 According to the ODNR, Carroll County leads the state with the largest number of permits issued to date. There are now 405 permits issued for well sites there.

The ODNR issued eight new permits during May. Four permits were issued in East Township, two in Fox Township and two in Union Township. All were granted to Chesapeake Exploration.

There are 153 wells in some step of the drilling phase and 191 producing wells in Carroll County.

Drilling appears to be ramping up in Guernsey County as well. The ODNR issued seven new permits for the county during May.

The ODNR issued five new permits in Belmont County. All five of them were issued to the Gulfport Energy Corporation. The permits were issued for two wells in Washington Township, two in Kirkwood and one in Union Township.

There are now 32 wells drilled there and 19 are in production.

Single permits were issued in both Columbiana and Jefferson counties.

The permit in Columbiana County was issued in Hanover Township to Chesapeake Exploration. The county now has 42 wells either drilled or being drilled and 23 producing wells.

In Jefferson County, the ODNR issued one permit to Chesapeake Exploration for a well to be drilled in Island Creek Township.

The ODNR is reporting 16 wells either drilled or being drilled in Jefferson County, and 12 wells are online producing.

In May, the ODNR issued two new permits for drilling the Marcellus shale.

One permit was issued in Belmont County to Gulfport Energy Corporation for a well site in Kirkwood Township.

One permit was issued in Monroe County to Triad Hunter for a site in Lee Township.

There are 44 permits issued for drilling in the Marcellus shale and 27 wells have been drilled.

The DEP issued 54 permits in Greene County during May. According to the report, 44 new permits were issued and 10 permits to drill deeper was also granted. There were 29 shale wells drilled, according to the DEP.

In Bradford County, 43 new permits were issued and one permit was issued so the well could be drilled deeper. Four wells were drilled during May, according to the DEP.

In Susquehanna County, 40 new permits were issued and one was issued so the well could be drilled deeper. There were 13 shale wells drilled in May.

In the immediate Farm and Dairy circulation area, the DEP issued 11 permits in Allegheny County; 10 permits for well sites in Butler County; one in Beaver County; one in Lawrence County and four in Westmoreland County.

In Marshall County, one permit was issued to Noble Energy on land owned by Consolidation Coal Company.

In Wetzel County, a single permit was issued to the Stone Energy corporation on land owned by Heath and Charmaine Starkweather.

Double permits were issued to the Jay-Bee Oil and Gas Company on land owned by W. and Ida Tustin Stanley.

A single permit was issued to Antero on land owned by David M. Hartley.

The DEP also issued a single permit to Noble Energy for a well to be developed on land owned by the Consolidation Coal Company.

Register for a guided tour of Pennsylvania game lands