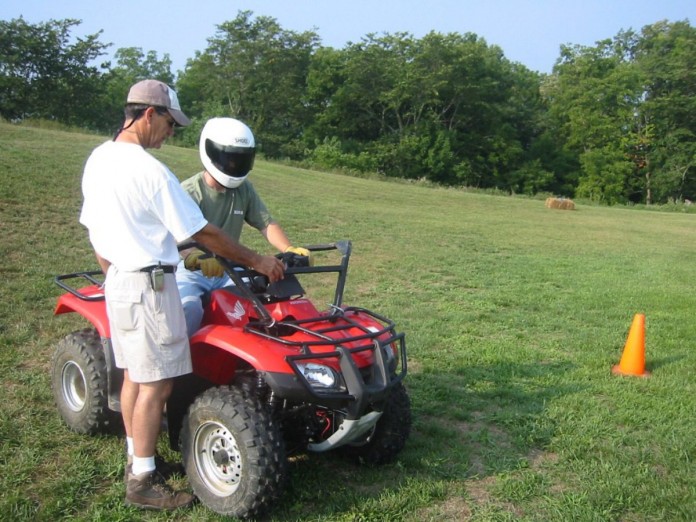 According to police, the ATV was being driven by Stacy Felker’s 14-year-old daughter, with four other children — none wearing helmets — as passengers.

Cases such as these have made ATV rider safety, particularly for children, a hot-button issue among safety professionals, legislators and advocacy groups.

In the long run, however, reducing the number of ATV-related accidents comes down to the rider himself, according to Dr. Dee Jepsen, state agricultural safety leader at the Ohio State University Extension.

“When three wheelers were taken off the market in the ’90s — and the industry did that itself — we didn’t see a shift in (the number of) injuries,” Jepsen said, “which tells me it is operator error. They don’t understand how and where to ride.”

ATVs, Jepsen said, are built for rough terrain and not for driving on paved roadways, where the majority of ATV crashes take place.

“That is why we recommend that even when you are going from farm to farm that you ride in a ditch where the vehicle has a lower center of gravity,” she said. “The second thing is speed. They have a straight axle, so they can’t turn 180 degrees in a short space.”

When the first modern ATVs came to America in the 1970s, they almost immediately became known for two things: their practicality on a farm, and a high injury and mortality rate among adolescent riders, higher even than that of dirt bikes.

It is difficult to make a correlation between those two facts, however, according to Bill Harshman, senior project associate with the Penn State Extension agricultural safety and health program.

“There is a real disparity here,” Harshman said. “ATVs used on farms represent pretty low numbers, about 16 percent of fatalities.

“Those who are using the ATV for work are not using it in the same way as those using it for recreation.”

“We are more concerned with recreational use or ‘rural’ use — those who go to the countryside and it’s all fun and games,” he said.

According to the Consumer Product Safety Commission, “fields, pastures, farmland or ranchland” make up 12 percent of ATV crashes with injury. Unpaved roads and forests make up an additional 28 percent.

Paved surfaces, on the other hand, account for 33 percent of ATV-related injuries alone.

This is not to imply that accidents cannot happen on farms, or that they are any less deadly when they do occur.

On July 25, Andrew Altenburger, a 28-year-old Cloverdale Village, Ohio, man was killed when the four-wheeler he was riding struck a surface drain in a field, rolling over and ejecting him.

“My first thought is that ATVs are designed to be ‘rider active;’ you use the whole seat to counteract the balance of the machine,” Jepsen said. “They aren’t like a Gator. They were never designed to have passengers.”

She added that when ATVs are loaded with bags of feed, sprayers or other equipment, providing that counterbalance while driving over rough terrain becomes even more difficult.

“Unfortunately, many safety messages, including warning labels, are not reaching all riders,” said Rep. Jack Cera, D-Bellaire, who introduced House Bill 504 in May.

The bill prohibits passengers; requires children under 16 to complete an all-purpose vehicle safety course to operate on any public property, and to wear eye protection and helmets while riding; and prohibits the sale of 90 cubic centimeter or higher horsepower vehicles “knowing or having reason to know that the purchaser intends to permit a child less than 16 to operate” the vehicle.

That final section of the bill, according to both Jepsen and Harshman, may be the toughest to enforce.

“A big problem is children on adult-sized ATVs,” Harshman said, noting that the Pennsylvania vehicle code allows for ATVs to be driven on public roadways between farms, so long as the farms are fewer than two miles apart, and that children as young as 8 are permitted to ride ATVs, “with direct adult supervision.”

A better test, Harshman said, is to simply check if the child can properly sit on the ATV and turn the handlebars.

“It is another one of those things where proper parenting is key,” he said.

Jepsen agreed that any law or manufacturer warning is only as effective as the rider who follows it.

“A manufacturer may say that no one under 16 should be riding one, and they provide training and education on how to use it, but there is role modeling, too, as far as what the adults do,” she said.