HARRISBURG, Pa. — The Pennsylvania Auctioneers Association inducted three into its Hall of Fame during the 65th annual conference and trade show Jan. 12.

Hostetter graduated from Penn State University with a degree in real estate and insurance, and is involved with the family auction business, started by his parents in 1955, as a full-time auctioneer and real estate broker licensed in Pennsylvania, Ohio and West Virginia. His passion for the auction business is surpassed only by his love of golf, which he playedprofessionally from 1978 to 1982.

Currently, Hostetter is the chairman for the State Board of Auctioneer 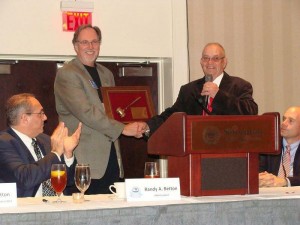 Harry H. Bachman of Annville, Lebanon County, was named PAA Auctioneer of the Year for 2013, selected by his peers.

Matthew Hostetter, CES, GA, GPPA, of Beaver Falls, Beaver County, was named Pennsylvania Auctioneer Champion January 9 at the Pennsylvania State Farm Show. He competed against 29 other auctioneers in a sold-out competition to be the best bid caller and auctioneer in the state as well as for the top prize of cash, a prestigious silver trophy and paid registration to the International Auctioneer Championship set for July 2013 in Indianapolis.

There was an unprecedented situation in the Pennsylvania competition in that three individuals tied as runners-up, all earning the same score from eight varied judges. These auctioneers were Patrick K. Morgan of New Holland, Lancaster County; Paul M. Storm of York; and J. Meryl Stoltzfus of Millerstown, Perry County.

The PAA also named a Rookie Auctioneer Champion, an individual who has been licensed as an auctioneer less than two years. This honor was bestowed on Zachary M. Toomey, of York.

A fun auction was held Jan. 10 where auctioneers and guests bid on classified advertising, trips, services, antiques, and other items. This event, which was one of the highest-grossing fun auctions in the history of the PAA, helps offset the overall cost of the conference.

Out of the 33 auctioneer champions chosen since the competition began in 1980, the PAA selected its second ‘Champion of Champions’ in this event, which is held only once every five years.

The coveted title of PAA Champion of Champions was bestowed on Matthew S. Hurley.

Two separate, special awards were created for this year’s contest. “Auctioneer’s Choice” was judged by all auctioneers in attendance at the PAA conference, and the winner was Hurley Auctions, which also won the Best of Show honor.

Another new and distinct award was the “Katherine E. ‘Sparky’ James Award,” given in memory of James who was an active PAA member and who streamlined and improved the marketing competition. Hunyady Auction Company of Hatfield, Montgomery County, won this award.

The 2013 conference also marked the end of three decades of PAA administration by Jeanie M. Crowl, who is retiring.

“I’ve stayed in this job more than twice as long as expected and probably three or four times as long as I deserved,” she said. “It has been rewarding and discouraging, carefree and tense, delightful and hateful.”

Randy A. Betton, of Greensburg, Westmoreland County, will serve one more year on the PAA board of directors as immediate past president.

Conference participants had a choice of 17 educational seminars during the course of the event, and a total of 14.5 accredited continuing education units were available to auctioneers to maintain advanced auctioneer certifications or auctioneer licenses held in other states requiring education.

How to grow potatoes from seed potatoes

How does ethanol fit into a net zero emissions future