WOOSTER, Ohio — In terms of both production and economic opportunity, hops growing is hot in Ohio.

However, crop threats like spider mites and outbreaks of diseases like downy mildew in some areas have both growers and researchers perplexed.

“The really encouraging thing is the number of craft brewers waiting in line and their openness to working with local growers,” said OSU Extension Horticulture Specialist Brad Bergefurd July 17, during the OSU South Centers and Ohio Agricultural Research and Development Center-sponsored 2014 Hop Field Night, which was attended by an estimated 170 people.

“But insect damage and disease management can impact growth and quality.”

OSU’s “Hop Production to Enhance Economic Opportunities for Farmers and Brewers” project, now in its second year, is showing that the impact of pests and disease varies greatly among hop yards throughout the state.

The study’s Piketon, Ohio, hop yard, for instance, has remained largely pest and disease free. Meanwhile, researchers at Wooster, located at the university’s Ohio Agricultural Research and Development Center, report battling spider mites and downy mildew almost from the start of the study.

Comments from hops field day attendees seemed to confirm the research study’s findings in this regard; one Northeast Ohio hops grower said he had experienced little or no problems with pests or disease, while the Summit County-based grower seated next to him said he is having a “terrible time” with both this year.

Adding to the problem for Ohio growers, OSU entomologist Mary Gardiner said, is that much of the research information regarding pest management thresholds comes from growers in western United States, where the majority of American hops are still grown.

Bergefurd said the second phase of the project will look at those thresholds, “though a lot of it seems to simply have to do with location.” 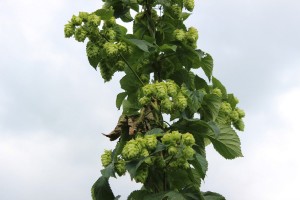 While the majority of hops, in both the “cone” and pelletized form, are still purchased from growers in the western states, Bergefurd said more processing centers are emerging in Ohio, and brewers are eager to work with local growers as long as quality and supply can be maintained.

Gardiner added that, unlike some crops, hops growing can be started on a on a small scale.

Mike Decker, who lives Williams County, near the Ohio-Michigan-Indiana border, is one such fledgling hops grower in the Buckeye state.

“I just planted some for the first time this spring,” Decker said. “I have a big garden with tomatoes, apple trees, English walnut trees, (and the hops industry) is going to be big.”

Decker said he has had mixed results so far with his first crop. While an encouraging number of plants have survived, he feels he planted his rhizomes far too early.

“My problem was that when I first got my rhizomes in October, they said to plant them within three to five days. We still had snow and the ground was wet and mushy.”

Decker has already completed perhaps the most important step in the hops-growing business.

“There are a lot of craft brewers in my area and a brewers’ club that is excited somebody in the area is going to be growing,” he said.

Bergefurd said setting up such alliances is vital to both individual growers and the industry as a whole.

Robert Holthouse, of Willard, Ohio-based vegetable growers Holthouse Farms, said he is helping his cousin, who is a craft brewing expert, enter the growing end of hops production.

“It’s exciting that there are so many varieties, a slight change can ever so subtly change the taste,” Holthouse said. “Production might be rough, but we’re growers already, so we’re used to it. It is just a lot of fun.”

Bergefurd said, though not as physically demanding as other forms of farming, the crop is a high-maintenance endeavor.

“You can’t be an absentee grower,” Bergefurd said, adding that despite nondescript look of the average hop yard, growers estimate $10,000 to $15,000 in start-up costs alone.

The Hops Field Night program covered a wide range of topics — from irrigation and fertigation, to food safety and Good Agricultural Practices (GAP) regulations, to insect and disease control.

First-year benchmarks and yields at the OSU hop yards were also discussed.

Planting is normally done in mid- to late spring — the Piketon field of Cascade, Nugget, Williamette, Columbus, Sterling, Galena, Mt. Hood, Hallertauer Tradition, Spalter Select, and Centennial varieties, was planted May 8 and 9, 2013 — and harvested as early as August in some cases, Bergefurd said. Each of the OSU hop yards has 180 plants, which are expected to be productive for at least 20 years, though Bergefurd noted some yards in Germany have been productive for 100 years.

OSU Research Assistant and Entomologist Chelsea Smith said the study group was thrilled to discover the hardiness of hops, when the entire crop returned after its first winter dormancy.

Depending on the variety and the cultivator, some estimates have put potential per-acre hops revenues at $2,000 to $25,200. Bergefurd was hesitant to attach such hard numbers to the OSU study in terms of revenue. The Piketon yard, however, has met first-year yield estimates, he said, with the Columbus variety producing approximately 796 dried pounds per acre.

When asked by an audience member what he would have done differently in the study’s first year, Bergefurd said simply, “A lot.”

He specifically pointed to setting posts higher to allow more bine growth, as well as creating wider areas between rows to encourage airflow and perhaps alleviate some of the downy mildew issues.

“That is part of what this study is about,” Bergefurd said. “Us making the mistakes so you don’t have to.”