YOUNGSTOWN — The houses in Youngstown’s Idora neighborhood, on the city’s south side, run the gamut from historical Tudors with well-manicured lawns and multi-car garages to smaller single family homes in desperate need of repair. Then throw in a few foreclosed homes and overgrown lots and you get a picture of a fairly ordinary neighborhood in Youngstown, Ohio.

A neighborhood that, in its heyday, was what many neighborhoods aspired to be. There’s one feature that is out of the ordinary, however: a field filled with several dozen potato plants. The plants belong to the Iron Roots Urban Farm, an ambitious project that’s designed to uplift Youngstown one potato — and neighborhood — at a time.

The farm is a program of the Youngstown Neighborhood Development Corporation (YNDC), a nonprofit whose mission is to improve the quality of life in Youngstown by building and encouraging investment in neighborhoods.

The Iron Roots Urban Farm is one part of the YNDC’s ‘Lots of Green’ initiative. ‘Lots of Green’ is a vacant land reuse program that seeks to repurpose land in targeted areas. The land is turned into 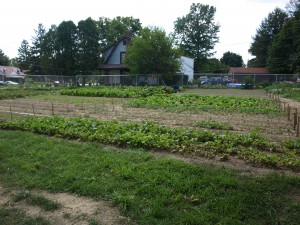 gardens, planting sites, pocket parks and, in the case of Iron Roots, a 1.5 acre urban farm and training center.

Merrill grew up in Oregon. While there, she worked for several small organic farms and gained experience with alternative construction techniques and alternative energy sources, like solar. She came to the area several years ago to pursue master’s degree in sustainable systems from Slippery Rock University.

During her studies, she interned with the YNDC because she saw something special about Youngstown. “I was fascinated by the opportunity here. I wondered, ‘why aren’t people taking advantage of that?'” she said.

Now as a full-time employee of the YNDC and coordinator of Iron Roots, she hopes the urban farm, “catalyzes other projects in the city and gives people the skills to utilize the vacant lots by their homes.”

It takes is one short drive around the city to notice what Merrill is referring to.

According to the Mahoning Valley Organizing Collaborative report, “Youngstown Citywide Vacant Property Survey,” Youngstown had 23,831 vacant lots and 3,246 abandoned buildings in 2010. Not only is vacant land unproductive, it also is a magnet for criminal activity.

The YNDC chose a plot of land in the Idora neighborhood because the area already had a neighborhood association that could be used at a starting point for the urban farm.

Since its unveiling in 2011, the urban farm has grown to include a hoophouse, solar powered vegetable chiller, greenhouse and a 2,700-square-foot home that will be remodeled and turned into classroom space, thanks to a $75,000 grant from J.P. Morgan Chase.

Though one goal of the Iron Roots project is to become self-sustaining through the sale of produce, that’s not the urban farm’s only purpose, said Merrill. “We know it’s not going to produce as much food as a large farm in the country, but the folks who work with us didn’t get the benefit of growing up on a farm. We want to bring some of those values to the city.”

To help bring those values to city residents, Iron Roots takes part in the YDNC’s Market Garden Training Program, a 10-week course that trains participants in the agricultural and business skills needed to begin urban farms on vacant land.

The farm also participates in the Green Jobs Training Program. The program takes young adults and trains them in building construction and deconstruction as well as urban agriculture and landscaping. During the 12-week course, the trainees can also receive assistance to acquire a GED.

He described the program and how it brings youth together who don’t normally have contact. This summer’s course, for example, AmeriCorps volunteers worked with the inner city students.

Moore grew up on his grandfather’s farm in eastern Portage County. He worked in construction for years before the housing market crashed, taking construction with it. After fighting unemployment and underemployment for months, Moore enrolled at Youngstown State University and majored in civil construction and engineering.

Kia Jackson, of Youngstown, has worked at Iron Roots for over a month and, thanks to the farm, she’s weeded, planted, tilled the soil and, for the first time, cut grass — though she admits her favorite part of the job is harvesting.

Urban farming has its share of struggles. For instance, in many urban environments the soil is too polluted to safely grow produce for human consumption. Pollutants often include industrial waste like lead and mercury, but trucking in clean topsoil is expensive. Iron Roots, however, only needed to treat the soil with phosphorus. “We got pretty lucky,” said Moore.

Moore is candid about the other difficulties urban farms face.

“Even though there wasn’t a house on this part of the property, there’s still broken glass everywhere,” he said as he was digging a hole for a post. He then leaned down and picked up a half-dollar sized piece of green glass.

“Groundhogs are another issue. In the country, you can shoot them, which is the most humane way to handle the problem. You can’t do that in an urban setting,” he added.

Access to high quality fertilizers and compost is scarce in the city, so Moore developed a novel solution: He’s using used brewery grains from Rust Belt Brewing Co. to mix with wood chips and other organic material to make compost.

“It’s very similar to horse manure; the flies don’t even know the difference,” he said.

Though it’s too early to tell the project’s long-term effects on the community, it has produced impressive amounts of vegetables since it began production in March. Moore estimates the farm has produced over 3,500 beets. The farm’s also grown impressive amounts of spinach (more than the farm could sell –it had to be donated to a local shelter), kale, green beans, radishes, escarole, chard and red onions.

The produce is taken to farmers markets like the Northside Farmers Market on Elm Street, across from Wick Park, which meets on Saturday mornings and the B&O Station Night Market, which meets Thursday nights.

Volunteers and employees of Iron Roots sell the produce.

If you’d like to volunteer, the Iron Roots Urban Farm has a work day, open to the public, the third Saturday of every month. Contact Curtis Moore for more details atcmoore@yndc.org or call the office at 330-480-0423.

2021 Farm Science Review will be in person