This coverage is from 2013. Be sure to view our live coverage for Farm Science Review 2014!


This year’s Farm Science Review has begun, and Farm and Dairy is there covering the event.

Follow along with Farm and Dairy’s staff as they experience all 80+ acres of ag exhibits, talk with some of the review’s 130,000+ visitors, watch the field demonstrations and enjoy some of the food the exhibition has to offer.

Return back to see live updates from Editor Susan Crowell, Chris Kick, Kristy Seachrist and Will Flannigan. In the meantime, follow Farm and Dairy’s staff on social media.

Editor Susan Crowell caught up with the Peterson Farm Brothers, made famous by their viral music video 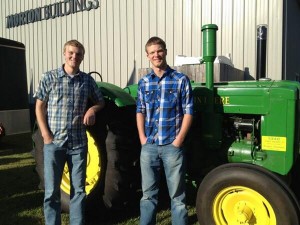 parody, “I’m Farming and I Grow it.” The video caught national attention and now has over 8 million views on YouTube.

The brothers performed at 10 a.m. at the Molly Caren Agricultural Center and are scheduled to perform again at 12:30 p.m.

Here’s a video she took while watching the brothers perform:

However, some people missed the performance:

Really wish that I could hve gone to farm science review I heard that the Peterson farm bros were there. Too bad I had class #fsr #FSR13

Greg and Nathan Peterson got to sneak away from their official duties to visit the John Deere exhibit, too. Greg posted this Tweet/Instagram photo collage:

Had a great day in Ohio yesterday speaking at the Farm Science Review! Got to meet a lot of great… http://t.co/NdCDirlCES 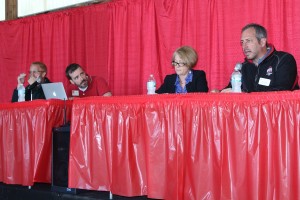 Reporter Chris Kick attended a panel discussion on the economics of water quality and a fertilizer tax. The panel, a group of economics experts from Ohio State University, discussed the broad costs producers can expect.

Chris recently covered the issue of nutrient runoff into Lake Erie, which can cause harmful algal blooms.

Gov. Kasich: Farmers are the best of what we are as Americans

@OhioStateFSR #FSR13 What an awesome day for some harvesting! pic.twitter.com/bpeX9mx8Df

Stay tuned for more updates from the Farm Science Review.

We finally got out to the field demos (at one point during the day, Wednesday, the line to get on the shuttle wagons to the fields was backed up into the main exhibit area!). Reporter Chris Kick shot out this Tweet:

It's a #CLAAS. And It's dumping a lot of corn at Ohio Farm Science Review #FSR13 http://t.co/kIPj0MFDXu

All the food stands at the Review support nonprofit groups and churches, and LOTS of Ohio State clubs within the College of Food, Agricultural and Environmental Sciences. We never miss a milkshake from the dairy club!

The @ohiostate #CFAES #dairy crew is busy serving up the milkshakes at #fsr13 pic.twitter.com/d2ql9Ve6wy

Drone demonstration at the Review 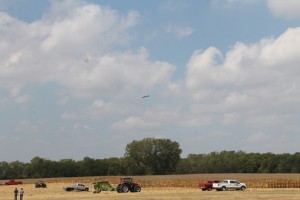 Lots of buzz in the air (sorry, pun intended) over the drone demo at the Review. Reporter Kristy Seachrist went to see what all the fuss was about.

Read the entire story (and her previous coverage of using drones in agriculture).

Take a video tour of the Farm Science Review!

Can’t make it to the review this year? Take a trip around the grounds on Farm and Dairy’s golf cart.


The grounds were PACKED on Wednesday. The official attendance: 58,600!!! It was a great day!

Don’t let the forecast of a little rain keep you away from the Review today! Ohio State’s ag dean, Bruce McPheron, Tweets it’s just going to settle the dust a little. 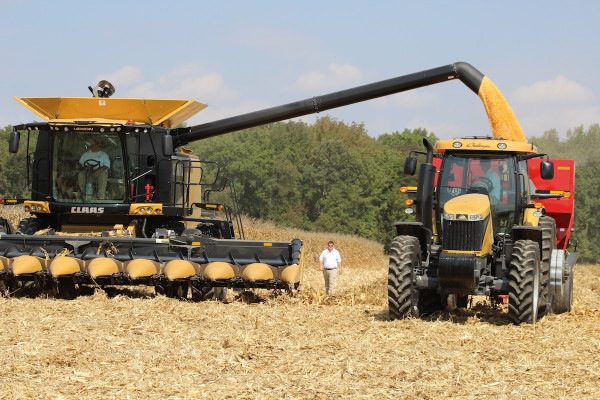