I want you to go to the movies.

Actually, I want you to go to the movies and take a nonfarm friend or relative.

On second thought, make that a carload of nonfarm friends. Buy their tickets, their popcorn and their overpriced fountain drinks.

It will be the best investment you will make this year. Trust me.

I got a sneak preview of the new documentary, Farmland, April 17 at the Cedar Lee Theater in Cleveland Heights. It was well worth the hour-and-a-half drive.

(Scroll down to watch a trailer of the documentary.)

The screening was sponsored by the Ohio Corn Marketing Program, Ohio Farm Bureau, Ohio Soybean Council and U.S. Farmers and Ranchers Alliance. The alliance provided major funding for the documentary, which was directed by Academy Award-winning filmmaker James Moll. 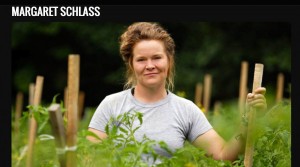 Farmland follows these young farmers through a growing season — opening with Loberg and his mother on hands and knees, in a corn field planted four weeks earlier. They’re digging with pen and pencil, trying to find any seeds that show signs of germination — “It’s been so stinking cold.”

It wraps up with the fall harvest, and the birth of twins to rancher Bellah, a symbol of the circle of life that never ends on the farm. A metaphor come to life.

The footage doesn’t foster any idyllic stereotypes; it captures real world farm frustrations, joys and fears. Dirt and mud and manure and all.

“My goal throughout the filmmaking process was to essentially get out of the way and capture on film what it’s really like to run a farm today — straight from the farmers and ranchers themselves,” writes Moll in a forward to a film discussion guide.

“I didn’t grow up around agriculture, so a lot of what I experienced in making the film was new to me.”

Wayne County farmer Roger Baker was also at the screening, curious to see if the documentary portrayed farming accurately.

Before the movie started, Baker told me he hoped the film told a story about agriculture that the nonfarming community would embrace.

“I believe the consumer, the nonfarming community, really wants to know more about agriculture,” he said.

“I take it for granted,” he added, “but I understand where they’re coming from. They want to know, ‘What I’m eating — is it the right thing or the wrong thing?’”

“They want to know the real deal.”

And the real deal is what Farmland viewers will get.

The young farmers address organic vs. conventional production, and the hot issue of genetically modified organisms, as well as acts of animal cruelty.

As Baker said when he came out of the theater, “It was real. They didn’t hide anything.”

Linda Frisch, of Beachwood, Ohio, who has no connection to agriculture other than being a member of the Ohio Farm Bureau, described Farmland as a “very moving film.”

“I have a great respect for farmers,” Frisch told Farm and Dairy Reporter Kristy Seachrist after the screening. “Farming is hard work.”

Frisch said the film made her aware of the risks farmers take in order to make a living and produce food.

“The average city person doesn’t realize what it takes. It doesn’t affect them, so they have no clue,” Frisch said.

She said she wishes the documentary could be shown in every school. I agree.

The documentary will be released nationally May 1 in select cities. Check farmlandfilm.com for details, or to be put on an email alert list.

These locations may be inconvenient for you to get to, and the May timing couldn’t be worse in the growing season scheme of things. But if you are living your life’s dream of farming, and are proud of your work, please consider taking the time to go see Farmland.

And don’t forget to take someone who doesn’t farm. That’s who we really want to see our life’s story on the big screen.

Helping the deaf leads to creation of telephone