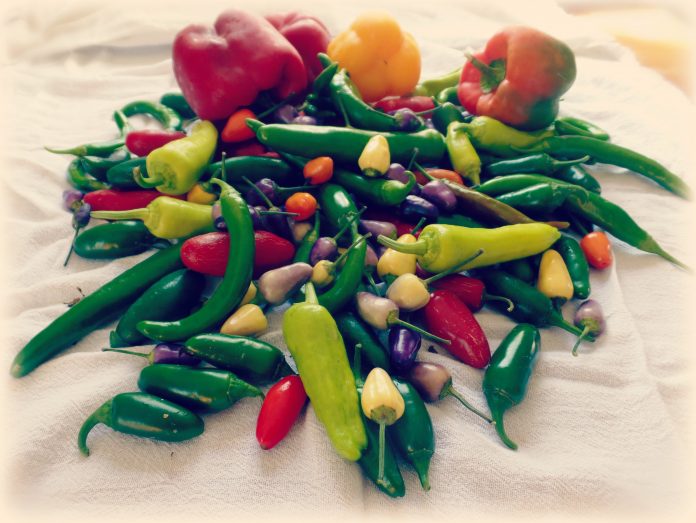 Although shoppers have access to only a few different peppers at the grocery store, hundreds of pepper cultivars are available for gardeners to grow in the home garden. Each pepper cultivar has a unique look, flavor and level of heat. People’s pepper preferences vary widely — from the sweetest bell to the hottest habanero. Cultivars come in every color — rich red, deep purple, even brilliant white!

In 1912, a pharmacist named Wilber Scoville invented the Scoville scale as a way to measure pepper heat on an index. The test is administered through a series of samples of pepper extracts. Extracts are diluted by units until tasters can no longer detect heat. One unit equals one degree of heat on the Scoville scale.

Peppers are indexed by Scoville Heat Units (SHU) from mildest to hottest. According to the Scoville Food Institute, the mildest pepper is the bell pepper at 0 SHU. The hottest pepper is the Carolina Reaper pepper at 1,569,300 SHU. Pepper fans may remember the Ghost chile, formal name Naga Bhut Jolokia at which lost its stronghold as world’s hottest pepper in 2007. Scoville ratings for other favorites include the jalapeno at 2,500-8,000 SHU, and cayenne at 30,000-50,000 SHU.¹

Pepper heat depends largely on the amount of capsaicin present. Capsaicin is a natural compound concentrated in a pepper’s inner white pith and seeds. If you enjoy peppers but not the heat, you can reduce the burn by removing the pith and seeds before consuming.

Growing environment also affects how hot a pepper tastes. Outside temperature, irrigation and plant stress may increase or decrease pepper heat. The Scoville scale does not take growing conditions into account when rating peppers, but the scale still gives eaters a good idea what level of heat to expect when they bite into a pepper.

The exception is hybrid peppers which will not produce future plants with true genetics. Hybrid seed is indicated by ‘F1’ on the seed packet. If you plan to save seed in for future plantings, pick open-pollinated or heirloom seed instead.

3Grow peppers anywhere.
Gardeners can grow peppers in any U.S. climate zone. Gardeners in the northernmost states should select pepper cultivars requiring fewer growing days to ensure plants have adequate time to mature. Banana and gypsy type peppers are ready to harvest in less than 70 days. Alternatively, northern gardeners can grow peppers in containers, to bring indoors when the weather cools. Petite peppers like Thai and pimentos grow well in compact containers.

Southern gardeners can take their pick of pepper cultivars to grow in the home garden. The southwest has a rich chile heritage. Anaheim types taste great fresh or roasted New Mexico style!