At last, spring is showing up, or at least trying to! The birds are singing; soon you’ll be working your fields, planting corn, beans, and all sorts of crops to feed your cows and the rest of us humans.

Then you’ll be working on bringing in the first cut of hay or hay crop silage, followed by a second, third, and fourth cut.

In late summer, you’ll harvest some corn for silage, then maybe some to be stored as high moisture corn or dry shelled corn. Eventually, you may wonder what your forage crop is testing.

Many years ago, I got a phone call from an Ohio dairy producer who asked: “You tell us to regularly test our forages, but how often should we do that?”

His question was followed by a long pause, as I was thinking about a correct answer.

I finally told him that I would have to call him back in a few hours because I needed to push a pencil to get the correct answer. Good thing that this producer was extremely patient, because four years later he was still waiting for my answer…

It turns out that nobody had ever attempted to answer this question, and that the answer was far more complicated than the question itself.

With the help of a very smart doctorate student, we came up with a method to determine not just how often you should sample your forages, but also how many samples you should take when you sample, and what to do with the results (i.e., should the rations be re-balanced or not).

Obviously, if the forage (say, your corn silage) never change, then all you need to send is one sample and you’d be done for a year.

Likewise, if a change in the forage does not affect production, then there would be no need to sample.

Along the same line, if the price of milk was $0/cwt, then any milk production loss associated with a forage change would also be of no economic consequence. 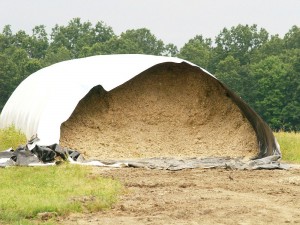 What we found is that there are 12 factors that affect how often you should sample your forage. Fortunately, they are not all equally important, plus we have written a software program that can run on any Windows system and do the calculations for you.

Columbo to the rescue

The software, in memory of the good old TV series where detective Columbo always found the guilty one, is aptly named Columbo. It can be downloaded (absolutely free) from our OSU Extension dairy website (http://dairy.osu.edu).

The software will suggest numbers to put in each of 12 entries. The default values should work reasonably well in most instances.

The ones that you will definitely need to know (and change) are: (1) the number of cows in your herd, and (2) the price of milk.

For those of you who have no interest in the nuts and bolts and just want the bottom-line answer, we looked at various combinations of entries to mimic the many different conditions faced by Ohio dairy producers. At a net milk price of $20/cwt and for forages that make up more than 25% of the ration dry matter, we can issue the following general recommendations:

Smaller herds. If your herd has less than 100 milking cows, then you should test your forage(s) once per month from one representative sample of each major forage and have the rations automatically re-balanced every month using the lab results.

Medium-sized herds. For those herds between 100 and 300 cows, you should have your forage(s) tested two times per month (every two weeks) with one representative sample and have the rations rebalanced using the lab results.

Large herds. If you milk more than 300 cows, you should have your major forage(s) tested two times per week with one representative sample each time.