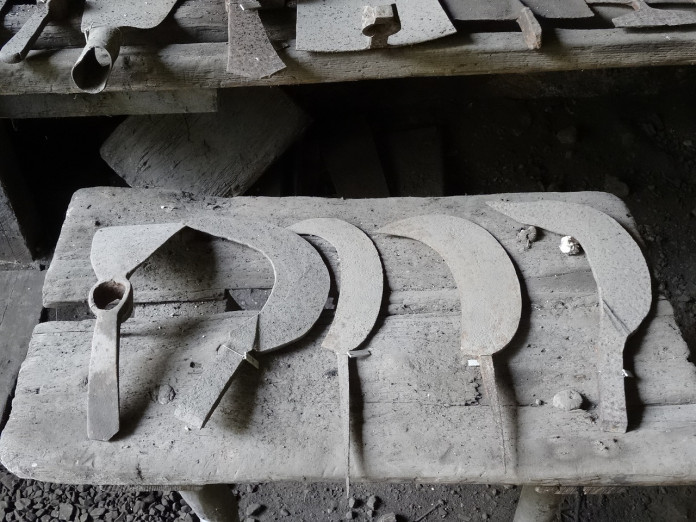 From my “Forgotten Farm Implement Company” file is the Bateman Manufacturing Company of Grenloch, New Jersey, whose Iron Age line of potato machinery became well known and ended up in the Oliver line of farm equipment.

Stephen Bateman was born in 1800 in Southbury, Connecticut. When he was 21 he went to Naugatuck and worked in his uncle Amasa Goodyear’s (Amasa’s son, Charles, later discovered the vulcanizing process by which rubber became usable) factory making hay forks, hoes, scythes and other agricultural tools.

Just to demonstrate how confusing it can be to reconstruct the history of these old companies, there are two different versions of how Stephen Bateman ended up in Grenloch, New Jersey and how his factory got started.

One version has him moving to what was then called Springmills, New Jersey (not far southeast of Philadelphia), in 1836 where he established a branch factory for Amasa Goodyear. In 1857, Stephen bought the factory, but as their products were primarily sold in the Southern states, the Civil War cut deeply into Bateman’s business. He therefore switched over to building wagons, which were in great demand during the war. Stephen Bateman retired in 1863 and turned the business over to his sons, Frank and Edward.

The other version says that sometime in the 1820s two men, William Carr and Martin Hunt, bought a 40-acre tract along a good creek in New Jersey “…on which there is a good saw mill & dam, a small dwelling house, etc.” Carr & Hunt (later, it’s referred to as Carr & Lunt, another mystery) converted the mill to making iron implements and machinery with Thomas Loring as superintendent. Carr & Lunt called their factory Spring Mills and the settlement that sprang up was called that as well.

Apparently, Stephen Bateman did work for Amasa Goodyear, where he learned to make agricultural tools. Then, according to Fred H. Bateman in “A Few Recollections,” Sometime “[B]etween…1826 and 1836…he [Stephen Bateman] made his appearance at ‘Spring Mills.’ Stephen went to work for Carr & Lunt, was compensated with one-quarter of the firm’s profits.” So he must have been more than just another hired hand at a forge.

Lunt dropped out and Carr had financial trouble, so his uncle, Joseph Hart, bought the place at Sheriff’s sale and let Carr keep on running it. Stephen Bateman bought at least part of the property from Hart in 1860 and established the “Spring Mills Agricultural Works.” In 1863, as stated in the other account, Stephen retired and put his sons Fred (not Frank this time) and Edward in charge.

Fred Bateman tells us in “A Few Recollections,” that “The lumber used in the manufacture of agricultural forks and shovels was brought by scows to Good Intent, which at that time had tide-water communications, and was there worked into handles” Bateman’s forks and shovels were hauled to Philadelphia by wagon and sold readily as they were of superior quality. When war broke out, Bateman began to make wagons as well as the agricultural tools. In October, 1863, E.S. & F. Bateman took over the business and continued to produce the same line of goods, although in five or six years later they quit making wagons and from that time the well-known line of Iron Age wheel cultivators and planters for the garden, horse drawn riding and walking cultivators, harrows, ridgers, field sprayers, and sulky hay rakes (dump rakes) were made.

In 1881 Edgar G. Wilson, who was Stephen Bateman’s grandson, joined the firm as a partner, and in May, 1886, there were fifty employees, who manufactured eighteen thousand Iron Age Cultivators per year. The business did so well that the transportation of raw materials to and finished products from the plant became a problem.

At the time the Reading Railroad was operating the Camden, Glouster & Mt. Ephraim Railway and Mt. Ephraim was less than ten miles from Spring Mills. Fred Bateman convinced the road to extend the tracks to Spring Mill, provided he get all the necessary right of way agreements, which he did and the railroad extension went into service in May of 1893. As the Reading already had a station called Spring Mills, Fred proposed the name “Grenloch,” Scottish for “Green Lake” in honor of the lake in Spring Mills. This was adopted and then became the official name of the community.

The Bateman line of Iron Age implements, particularly the “Improved Robbins Potato Planter’ that was introduced about 1890; an 1895 account said that employment at the Bateman plant averaged “75 to 80 hands and ‘a few boys.’” A potato digger was announced in 1906 and Bateman prospered until the Great Depression.

The A.B. Farquhar Company of York, Pennsylvania, noted for their threshers and steam traction engines, was looking to diversify as steam was rapidly being replaced by tractors, so they bought out the Iron Age line of equipment from Bateman in 1930. Farquhar sold Iron Age machinery until they were bought by the Oliver Corporation in 1952. Oliver continued to make and sell Iron Age sprayers and potato planters at least until the White Motor Company takeover in 1960.

As for the question of whether it was Fred or Frank Bateman, there are Bateman Mfg. Co. patents on file in the U.S. Patent Office with both Fred H. and Frank Bateman’s names on them. Many accounts refer to him as just F. Bateman, which isn’t helpful. However, the patents in Frank’s name are dated between 1887 and 1908, while Fred’s are from 1920 to 1937. I’d be inclined to believe the version in “A Few Recollections” as it was written by Fred Bateman himself, and he presumably was an eye-witness to what occurred. However, Frank Bateman was born in 1842 to Stephen and Ann, while Fred Harlan Bateman was born in 1873 to Frank.

Oh well, in the vast scheme of things I don’t guess it really matters — except I like to be accurate.