I’ve been hearing many complaints about the weather. We all know to expect variable weather in early spring, so I decided to look up so data to see if these complaints hold water.

It seems the complaints for spring 2013 are valid, when compared to last year and also the historical average.

What are the possible effects on forages?

The critical temperature for growth of cool season forages is about 50 degrees, so March temperatures are critical to determining the onset of the growing season. Spring in 2012 was early and resulted in an early start to the season. Spring 2013 could be one to two weeks later than usual, if this cool trend continues. 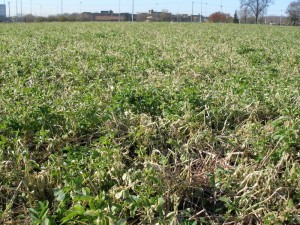 It might be prudent to plan for a later than usual turn-out of cows onto pasture.

One common risk in spring is a late season freeze.

At the end of March 2012, alfalfa in central Ohio already had 8 inches of growth. A 27-degree freeze on March 27, 2012, turned a few shoot tips, but luckily did no permanent damage.

We were not so lucky on April 5, 2007, when a 24-degree freeze destroyed all spring growth, and for the remainder of that year, the crop was never able to compensate that lost yield. (see photo at right.)

Hopefully, our slow spring in 2013 will not be further impaired with a late-season freeze.

One common feature of spring-season forages is low dry matter content. Forages typically have 15-25 percent dry matter, however fresh spring growth that often is associated with wet soils can have dry matter as low as 8-12 percent.

Livestock usually adjust their intake to a constant dry matter intake (3.0-3.5% of liveweight) and it’s rare that the dry matter percentage affects animal intake. To compensate. With the low dry matter content of spring forage, grazing livestock can have their intake restricted by the volume of water in fresh forage. Milk yield can suffer as a result.

The only management option is to try to compensate the low dry matter content with high dry matter forage such as hay and other dry feeds.

The extremely different spring seasons in 2012 and 2013 make us wonder what this means for climate change (a term we hear a lot about these days). The reality is probably very little, when considered separately from the last 100 years of temperature patterns.

Climate is subject to year-to-year variation in weather irrespective of any change in climate. Climate change is a long-term pattern of temperature — so two variable years is inconclusive in a 100-year pattern.

It appears the complaints I’ve been hearing have merit, and we’re having a cool, but not too wet, spring. The consequence might be a season that is 1-2 weeks later than usual.

If there’s a bright side in all this, our forages might be at less risk from a late-season freeze. Warmer temperatures are just around the corner!

Managing armyworm in forages with IPM