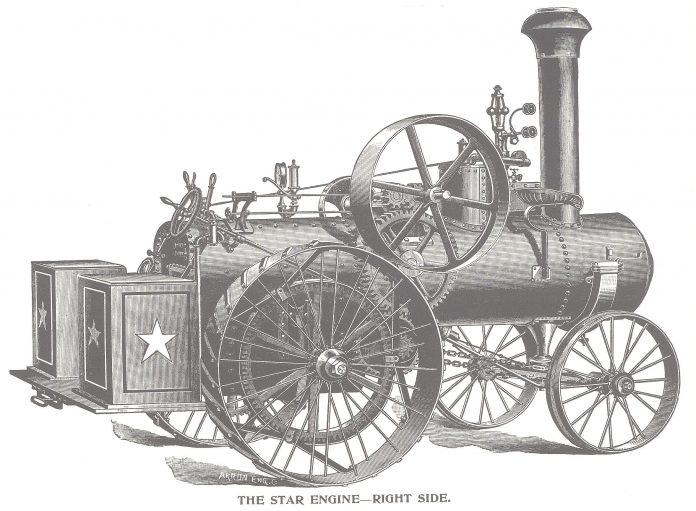 Bascom B. Clarke, the founder and editor of The American Thresherman magazine throughout most of its existence, got his start as what he referred to as “a machine man” about 1880, selling threshers, engines and other machinery for Robinson & Company in Richmond, Indiana.

Clarke was fond of telling stories of those early days in a monthly column he called Fifty Years a Machine Man, and in the July 1928 issue, he expounded on the allure of brightly painted machines.

“One of the serious mistakes of a machinery user is to allow his artistic soul to get the better of his judgment.

The beautifully painted threshing machine with its bright colors and those wonderful transfers plastered upon the sides has been the ‘Jack-o’-lantern’ which has lured many a good man to his financial doom.

“The first thing that made me so proud of Robinson threshing machinery, my first love, was those big, bright transfers on the sides of the Bonanza thresher.

While watching the prospective customers who looked at my machines at the Indiana State Fair, in my first experience as a salesman in charge of a state fair exhibit, I quickly discovered the value of bright vermilion paint.

That, and my added suggestion that if they would close their deals then and there, even after the season’s threshing was done, I would either furnish them the new machine then on exhibit, or would duplicate it and have their names placed in gold leaf on the sides.

“That enabled me to close deals for over $10,000 worth of engines and separators in a day and half, once receiving $75, or half the purchase price, cash in hand.

My employers were astounded, and when I repeated the performance at the great St. Louis fair, this proof of salesmanship caused them to offer me a five-year contract at a salary almost twice the amount paid ordinary salesmen back then.

“Another thing I learned was that one of the essential elements of a successful machine man is nerve, or shall I call it ‘gall?’

“The machinery competition was fairly keen in Indiana in the early eighties, and I had met the competitors on the fairgrounds with our machines sitting side by side.

But, by having the brightest and most artistically painted machine on the fairground, I had been able to show my metal.”

Clarke rambles on a while about the fertile soil in Posey County, Indiana, where is… raised some of the best wheat in the world, and I’ve seen the railroads blocked for 12 miles, from Fort Branch to Mount Vernon on the Ohio River, with water-melon trains.

Water-melons piled up in ricks ten feet high, from acres and acres of ground, and the best that the world affords.

Getting back to bright paint, Clarke confesses that even he was once taken in by it.

By the 1890s, Clarke was running a branch house in Wisconsin for C. Aultman & Company in Canton, Ohio, an old firm that was then nearing bankruptcy.

“In the spring of 1894, when C. Aultman & Co. became ‘Defunctus Officio’ by reason of building about the poorest machinery in the world, so bad that even pretty transfers wouldn’t keep it sold, I went down to Canton to look at the stock of ‘rebuilt’ machines.

I was particularly attracted by a nifty-looking Star engine, all ‘buttered and salted’ with a high-grade vermilion paint and a few transfers that made it look like love at first sight.

I gave them a check for this sum, figuring to make about $300 profit when I caught a “Hill Billy” needing this addition to his outfit.

“I sold the engine for $650 and took a mortgage on a Wisconsin hill farm.

When the new owner first fired it up, six flues that had almost rusted through gave way, and there I was.

The company had lied so beautifully to me about this having been a ‘sample machine’ and used only a few weeks, but I always tried to play square with my customers so, believing there should be honor even among thieves, I simply confiscated an entirely new engine from stock on hand, changed the serial numbers of the two engines, and my customer was happy.

“When the Aultman house found out about the swap, they accused me of ‘cheating.’

I offered to air my actions in court and bring out all the facts involved.

“I’ve sometimes felt the Devil owed me a debt and paid it off in machine experience, for here I’ve found some of the crookedest sticks in the forest of life, and again I’ve met some of the most wonderful men that ever filled any place in the business walks of life.

“I’ve learned to love not only the good, but also the evil among my brethren, and while it’s a hard dose to swallow sometimes, yet the man who has been a machine man for fifty years, and who has not learned to soften his nature towards all mankind, has lived in vain.”

Mr. Clarke usually used his experiences over his many years in the farm machinery business to illustrate a moral to his stories.