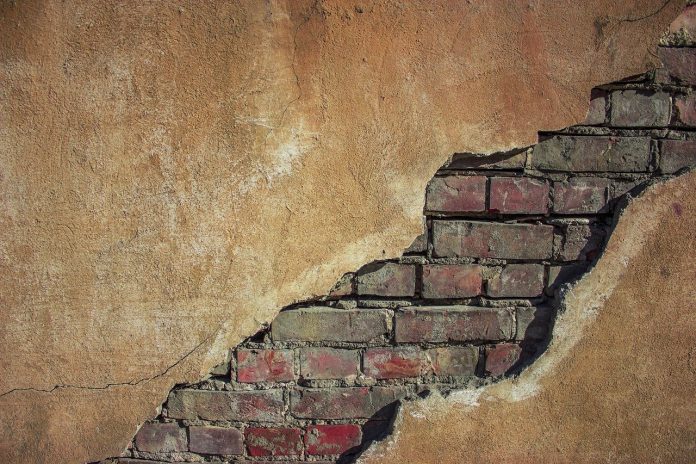 I see no reason to do dumb things halfway. You should know that if I’m going to embark on a harebrained scheme or bad idea — I’m going to be all in.

As we close 2019 with our new business thriving — thank you, Lord — I realized that my long honey-do list of neglected home chores would basically have to be completed during the brief lull in business that is Christmas through early January. The one month without specialty shows demanding product. That period when no one is demanding a custom order to be completed in two days prior to the holiday.

Regular readers may recall that I’ve been trying to take down a wall between my kitchen and living room for about two decades now. But Mr. Wonderful, ever the buzzkill, keeps nattering on about load-bearing walls. He seems pretty wedded to the fact that this wall is apparently holding up a three-story chimney and a host of fireplaces and so on.

Frankly, I think he just lacks vision. He, however, says he has a vision of the entire house collapsing upon us. Whatever dude. He continues to be a total killjoy on my plan to bring my house down around myself.

The kicker is that he’s still always game for a good time if I come up with an idea that intrigues him. Knowing this, I set my trap.

This time, however, I was prepared. I pointed out that we get an awful lot of cold air coming up from the basement through this wall. I shrugged.

“I mean I find it just adds character but perhaps we are — here I paused for dramatic effect — losing heat.” Note that to say to a middle-aged man that his house might be “losing heat” is akin to a declaration of war.

We have a woodburner about 200 feet from the house. It pushes heated water through underground pipes across the yard and into the house which is heated by hot water radiators. Of course, it does because nothing in our place is ever simple.

What this means is that Mr. Wonderful feels every thermal leak to the core of his being and that the wood he has carried, cut, and loaded with his blood and sweat is being wasted. The thought of any of that hard-won heat leaking out would bring the tears.

Most husbands and fathers might say “do you think money grows on trees?” In our case, the money saved in heating costs actually does grow on trees. I plan to use this commitment to my advantage.

To hear me talk, I’m only concerned about tearing off the plaster over that brick to get at the maintenance of the thing. I mean if we got into that plaster we can probably repoint or maintain or at least remove a few generations of mouse carcasses from behind that wall. I really played up this angle.

Think of the heat loss, man. Bingo! Within minutes he was poking around. Shining a light around the wall, he admitted that getting all that old plaster off and exposing the brick in order to take a look at things might not be the worst idea we ever had. This, my friends, is how it’s done.

“Not the worst idea” is practically a yes! Granted, even I am not foolish enough to tear out a wall days before Christmas. I am totally foolish enough with doing so right before New Year’s Eve, however. All it will take is a few more weak moments (on his part) and a few more shivers as a brisk nor’easter blows through the crack (according to me). I will continue to sigh and clutch my sweater around me while gazing at the crack mournfully.

In the dance that is spousal communication, I am sure Mr. Wonderful has often felt that trying to stop one of my renovation ideas was akin to beating his head against a brick wall. In this case, his experience in doing that when it comes to dealing with me is going to come in real handy!