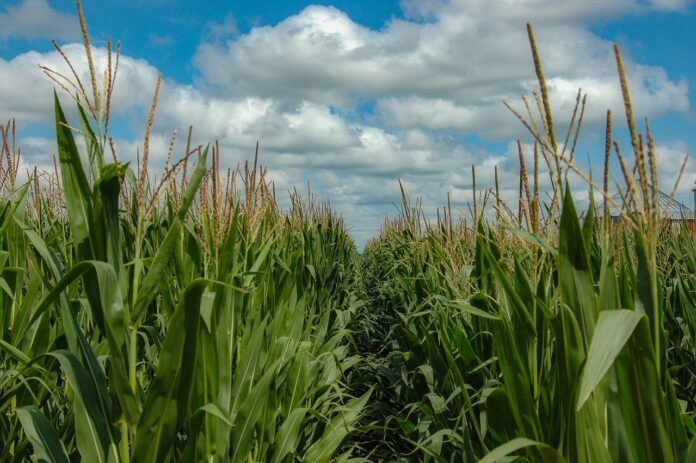 Some corn across Ohio started to tassel last week and is in full pollination to just beginning brown silk this week. The ideal time to scout corn for fungal disease and for fungicide application is from tassel through pollination.

When fungal disease is present in corn silage at harvest, a fungicide application at VT-R1 to control these fungal diseases reduced fiber concentration and improved nutritional value compared to untreated control.

When a fungal disease infects the plant, you often see a natural response to the disease of an increase in lignification of the fiber, which results in decreased NDF digestibility. Fungal contamination of rust has also been found to reduce fermentation with final pH being higher when rust was present compared to corn silage treated with fungicide.

One study looked at corn silage treated with Headline or Headline AMP at V5 or R1 on the performance of Holstein cows compared to untreated corn. They used best management practice for disease, selecting a corn variety with high levels of disease resistance.

Milk production was the same, but the corn with lower mycotoxin levels (treated with fungicide) did have increased energy corrected milk and better feed efficacy.

Mycotoxin contamination of corn silage and high moisture corn is concerning for dairy producers with many nutritionists encouraging levels below 1 ppm in corn utilized in the lactating ration. Fungicides may have the ability to reduce mycotoxin levels and improve silage digestibility.

DON is one of the primary vomitoxins toxins in Ohio corn. It is caused by the fungus Fusarium graminearum and causes both Gibberella stalk rot and Gibberella ear rot, making it of concern for both the grain and forage quality.

One study under low Gibberella disease pressure saw that in all cases but one, an application of fungicide at R1 reduced DON levels by at least 50%. The trial was then expanded the second year, which was a high disease pressure year with DON levels as high as 17.9ppm in one hybrid and 30.3ppm in the other hybrid.

Again, fungicide had little effect on these two BMR hybrids yield or forage quality, but a few products did consistently lower DON levels.

A 2021 corn silage trial in Ohio showed a vomitoxin reduction from 3.1ppm in the control to 0.5ppm with Miravis Neo application. The products that consistently lowered DON levels contained a triazole as one of their active ingredients with prothioconazole being the most common.

Three products that researchers across the country are seeing lower DON levels with when disease is present are Proline, Delaro and Miravis Neo.

The ideal application window from multiple studies has been R1 which is from the point when silks emerge until they become dry about 10 days later. This application is primary for Gibberella ear rot which infects the ears during pollination. This does create some logistical issues with application requiring high clearance sprayers with drops for best results followed by an aerial application.

Scout now for possible fungal diseases. While Gibberella ear and stalk rot are not visible to the eye, other important diseases are. New to Ohio last year is tar spot of corn which can greatly reduce the moisture content of corn silage within a couple of weeks of severe infection.

Tar spot is appropriately named with leaves and husks being covered by small black raised dots, and as the disease progresses, it causes the tissue to die and turn brown.

The other two most common diseases are gray leaf spot that has gray to tan lesions developing between the veins and are distinctly rectangular with smooth, linear margins along the leaf veins. Lesions are slow to develop, needing 14-21 days, and begin in the lower leaves.

Northern corn leaf blight lesions typically have a tan color and are elliptical or cigar-shaped with smooth rounded ends. Scouting is critical when making fungicide decisions.