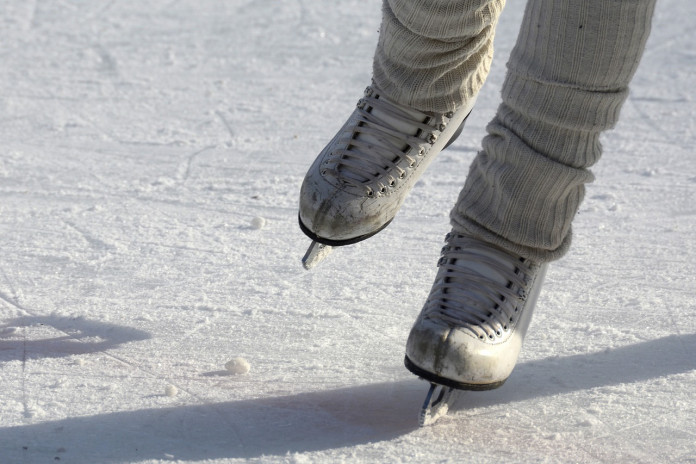 “In February a farm is like a child’s hand, opened and held palm up to show that nothing is concealed in it. Without leaves to veil the farm buildings and fields, the naked facts of a farmer’s work habits and holdings are revealed even to the casual traveler passing along the road. Did the farmer get the disk put away after he finished the wheat field last fall, or is it still out in the field rusting away its spring trade-in value? Are the cattle fat or thin? Nothing is hidden in February.”

February, we prayed for snow, and ice thick enough on the farm pond for ice skating.

As kids, February demanded little of us, other than the daily milking. Our dad took pride in putting every piece of equipment away for the winter, and the final mowing and weeding back in late autumn left the place looking neat as a pin.

The farm, surrounded by the drab gray of an Ohio winter, looked as though it was awaiting Spring.

If it was cold enough to snow, it sure seemed we should be allowed to skate.

I would ask “What are we waiting for? It’s iced over!” Dad would shake his head and say that it had to be a lot colder, for a lot longer before we could get on that big pond.

We knew we would get a skutchin’ if we tried it before we had the clear go-ahead from Dad, who worried over one of his kids getting hurt more than anything else.

As soon as we were given the green flag, out came the old, beat-up, hand-me-down ice skates. We stored them in the cellar, most of them in a dark cubby hole tucked under the top cellar step.

Trying our skates on in the kitchen, I learned I had outgrown the skates that seemed just perfect the winter before.

The only other choice was a too-big pair of skates with white leather so soft and pliable it did nothing to support ankles. I had to wear at least three heavy socks to fill out the foot. I knew it wasn’t going to be a stellar, gold medal year for me.

We dressed in tons of layers, then headed for the pond, skates in hand.

Sitting on the bank, it was a chore taking boots off and getting skates on, with so many clothes on we could barely bend. The frigid cold hit our feet as we tried hard to get in to our skates.

Ah, but it was all worth it, or so we thought. Pushing off, gliding on ice, was a thrill. Well, until the bump and the fall.

We grew wiser, figuring out where the ice dipped and sloped or was riddled with ripples. It was a true test to a vivid imagination, as we pretended to be Olympians in beautiful clothing.

Our stinky coveralls, in Cinderella fashion, turned in to pastel chiffon, flowing gracefully with our slowly-improving skating. A successful figure 8, in our world, was as impressive as a triple flip.

When fingers and toes were frozen numb, our faces red as could be, we knew we had to call it a day. We still had the change back to our boots ahead of us, our gloves now wet and worthless, and a good walk home.

Skating always made us thirsty, hungry and anxious for a cozy, warm kitchen. Bring on the hot chocolate and marshmallows!

As we walked home, we hoped for snow, and lots of it. Our perfect sledding spot meant we could invite neighbor kids and have hours of fun together.

Old time farmers always said that in February, it thaws a little each day.

It is music to my ears now, but as a kid, February was a really great month to be frozen over.

How to stay safe on frozen lakes, ponds