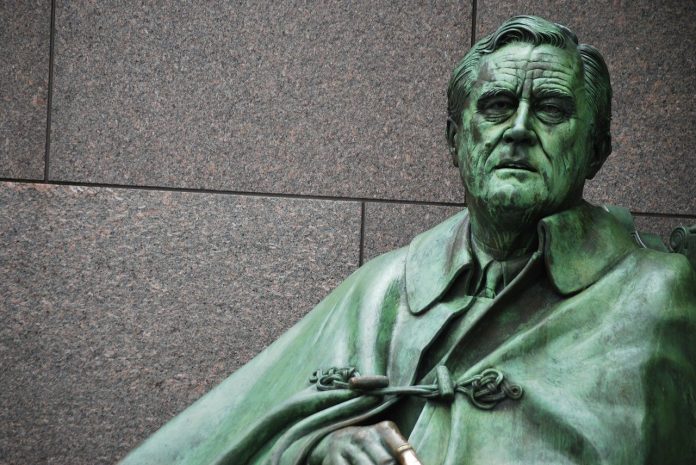 Nearly a year before the end of World War II, the citizens of the United States had to hold the election of 1944. It was the first wartime election since 1864.

The war was going well, and its successful prosecution took priority over domestic politics in most voters mind. But under the veil of the war effort, trouble loomed within the Democratic Party.

Would President Franklin D. Roosevelt stand for an unprecedented fourth term and if so, who would be his vice president?

Long before the campaign of 1944, the health of Roosevelt had become a matter of considerable concern to those closely related to him.

Gone was the sturdy, muscled torso that yanked 10 pounds of steel bracing that allowed him to walk and stand after the polio attack, as was the handsome Dutch face that now showed dark circles that never quite faded from under the eyes. He was gaunt and gray faced, with slacking jowls and hands that trembled.

He was just the shell of the man he had been 10 years prior when he challenged the Great Depression. He was suffering from hardening of the arteries, a failing left ventricle and stratospheric blood pressure reads as high as 234 over 124. His energy level was almost nonexistent, and he had a weight loss of 30 pounds, which left his clothing sagging on his 62-year-old body.

But “two cocktails” Roosevelt was an old campaigning war horse, and when a trusted adviser suggested he not commit to a fourth term as president, he responded, “I think I can well plead extenuating circumstances. I have as little right to withdraw as a soldier has to leave his post in the lines.”

After all, Abraham Lincoln remarked it was not a good idea to change horses in the middle of a stream.

His companions and family had good reason to question his campaign ability and four more years as president. Physically, the Hyde Park stamp collector/conservationist was a dying man. His first two terms were grueling, and the third had driven him into the ground.

Following Pearl Harbor, the days of planning grew longer, travel was more frequent, and stress compounded. He had done more than any other president in history. Who would replace him? Roosevelt waited until the last minute to announce for a fourth term — July 10, 1944.

Throughout the early summer, Roosevelt in a nonchalant manner threw random names he thought might be excellent running mates for vice-president, but there were never more than three serious individuals. Two men wanted the position; the third didn’t and tried to talk the other two into accepting the job.

The party elite did not want the current Vice President Henry Wallace on the Democratic ticket again. They saw him as a far left idealist with a distorted view of the world who was in bed with the ultra liberal labor movement influenced by communism. He would generate too many headaches within the party structure and might even lead to a split that would hand the Republicans the victory.

While Roosevelt had no quarrel with Wallace, he was in no position to bully the party leadership over the choice of vice president. As for the second individual, Jim Byrnes, he was a southerner who left the Catholic Church, which presented a problem for both Catholic and northern black voters.

He was also pushy and manipulative and threatened to resign when he did not get his way. But Byrnes wanted the nomination and badgered Roosevelt for his approval.

When Roosevelt was noncommittal, Byrnes turned to Truman for support and received it. Truman would later discover how he was manipulated and called him a “slick conniver.”

The third candidate, Harry Truman, had the best track record. Labor leaders liked him; northerners and southerners liked him because he was from a border state — Missouri; the industrial elements liked his work ethic and his World War II leadership as chairman of the Special Committee to Investigate the National Defense Program.

Time magazine described him as the “outstanding senator,” while  Roosevelt said he “hardly knew Truman.” When the “mule from Missouri” did oppose New Deal policies like the Supreme Court and wartime spending, he did so quietly.

Truman understood his attractiveness to the party bosses, but he didn’t want the job. He thought Roosevelt would veto his candidacy because of his association with Tom Pendergast in Kansas City, his running of the Senate committee when it asked about wartime spending, or his opposition to Roosevelt’s running for a third term in 1941.

Truman’s wife Bess did not want him to take the position, daughter Margaret thought he should, the mother-in-law had no opinion and Harry was trying to disqualify himself.

All the while, there was mounting public pressure to get his name on the ballot. Even his close friend, Tom Evans from Kansas City, could not save him when the Democratic convention met in Chicago.

A telephone call settled the question. While aboard the luxurious train, the Ferdinand Magellan, Roosevelt — on his way to consult with Gen. Douglas MacArthur in the Pacific — called the Windy City.

The party bosses remarked that Truman’s response to the request that he accept the vice president position was “tell him (FDR) to go to hell.”

Roosevelt answered Truman’s outburst, “if you want to break up the Democratic Party in the middle of a war, that’s your responsibility.”

Truman, hearing the president’s loud voice over the phone, said, “if that is the situation, I’ll have to say yes, but why the hell didn’t you tell me this in the first place.”

Truman was vice president for a period of 82 days when suddenly he was president.

Late in the afternoon of April 12, 1945, he went to visit Speaker of the House Sam Rayburn’s daily “Board of Education” meeting for a bourbon and branch water. A message awaited him — call the White House.

When he arrived at the White House, Eleanor Roosevelt greeted him with the expression “the president is dead.”

Truman responded, “is there anything I can do for you?”

Eleanor replied “is there anything we can do for you? For you are the one in trouble now.”

At 7:09 p.m. April 12, 1945, Truman became president. He had the most awesome job of all the eight accidental presidents in American history.

He ate a turkey sandwich and slept soundly that night. The next day, he faced the twin burden of playing catch up and following one of the great figures in history.

He had to buckle down and learn fast, and what he achieved was extraordinary. That’s your history!