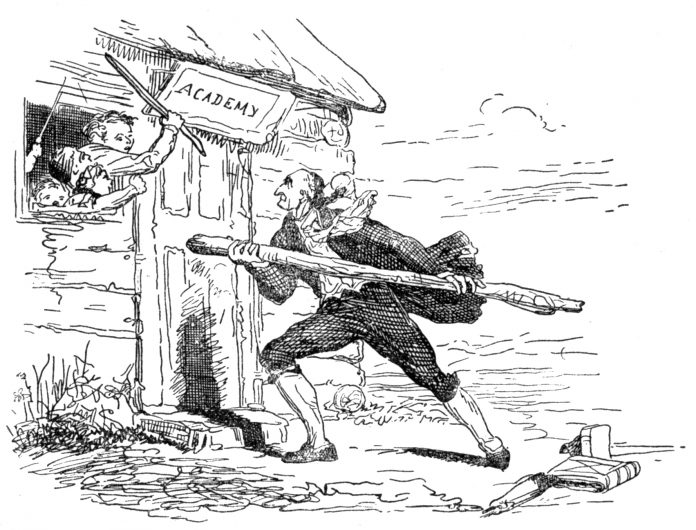 I see by our local school district’s schedule that Christmas recess is to be from Dec. 21 to Jan. 2, a total of 13 days of no school. I don’t recall, but when I attended a one-room school in western Pennsylvania during the 1940s, it was probably close to that.

Local schools were scarce in frontier communities during the mid- to late-19th century, nor was there much in the way of celebrating the Christmas holiday.

When a school building had been built and furnished with benches and such, a school teacher was hired; usually a man because it was thought that only a man could control the older students, some of whom might be 19 or 20 (students could attend school as long as they wanted and paid for their term; some did, considering it a way to get away from the monotony of home life, which meant they sometimes were older and knew more than the teacher).

The contract between the school trustees and the teacher usually included a salary of $15 to $25 per month, with the privilege of “boarding around” with the families of students.

It also called for a term of instruction of about four months, from mid-November to mid-March, after which the bigger children were needed on the farm for spring work.

No provision was made for holidays and attendance was expected on Christmas day if it was a weekday. Tradition, however, called for the schoolmaster to at least provide some apples and cookies on Christmas morning and to allow the kids to play games most of the day.

Schoolmasters in those days were a stern bunch and enthusiastically resorted to the rod to enforce the rules and instill the lessons into unwilling minds.

One student (Oliver Johnson, 1821-1907) recounted much later, “schoolmasters was mighty strict in some things and used the [rod] purty often, especially if they was in a bad mood.”

Some teachers refused to provide the expected treat out of pure meanness, while others felt their contracts required them to teach on every weekday, even though they would have enjoyed a day off as much as the children.

If, in the days leading up to Christmas, the master had given no indication of any forthcoming goodies, the older students determined to “turn,” him out of the schoolhouse on Christmas morning until he agreed to treat the children.

The following story is based on several accounts of these encounters. Mr. Court, a large, middle-aged, bachelor teacher with a bad temper was in charge of a school in the Ohio countryside in the 1840s.

A couple of days before Christmas the older boys saw Court fixing the schoolhouse windows so they could be fastened from the inside and realized that he meant to lock them out if they asked for anything.

In those days teachers had to chop their own wood for the schoolhouse fire and Court came down the road carrying an axe and a bundle of kindling wood.

When he found the door locked and heard the kids inside he shouted, “What’s going on here?”

The oldest boy replied, “Come around to a window and find out!”

Court appeared at a window where he was handed a list of demands which included apples, ginger cakes and birch beer, as well as games the rest of the day, and no punishment for any of the scholars who had taken part in the turning out.

Well, Court exclaimed “Go to the Devil!” and commenced to hack at the door with his axe, reducing it to splinters.

When he found the inner door also barricaded, he gave up, dropped his axe and disappeared up the road. Turns out Court had gone to a tavern where he fell to drinking and didn’t show up until about a week after Christmas, dirty and disheveled.

He collected his valise from the farmhouse where he was boarding at the time and disappeared down the road forever.

Of course, that meant the end of school for that year, but none of the students much mourned the loss of Mr. Court.

Other accounts had happier endings, with the schoolmaster only resisting long enough to demonstrate to the school trustees that he’d had no choice but to give the rowdy students the day off.

Some of the children’s parents usually knew of the prank and were on hand to make sure things didn’t go too far.

Most teachers knew what was expected, as did most boards of trustees, so, as Oliver Johnson said, “Usually the masters we had was ready on Christmas morning with their treats and we spent the day eatin’ apples and ginger cakes, playin’ games and havin’ a jolly good time.”

During my first through eighth grades at a one-room school, it never occurred to any of us to lock the teacher out for any reason. Of course, we seldom got whipped, had holidays off, and usually had a little Christmas program of some kind where we each got a small box of candy. Another example of the “good old days!”