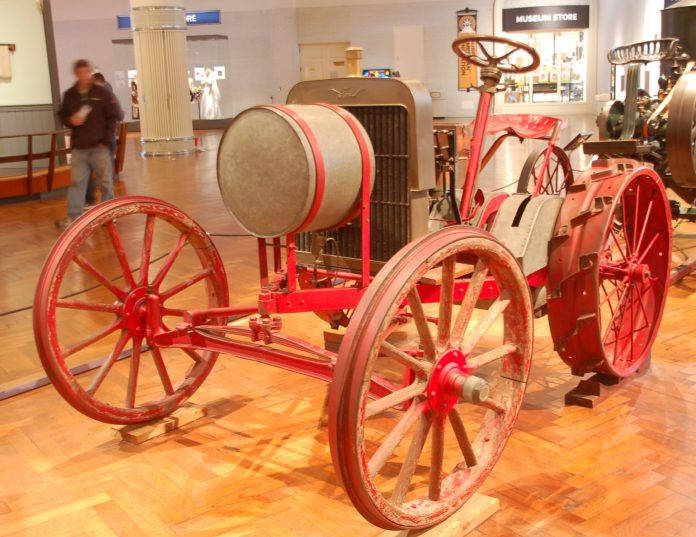 Most every Rusty Iron lover is familiar with the Fordson tractor, Henry Ford’s answer to a horse farmer’s prayer.

Mr. Ford was a fascinating man, and the story of his early years, as well as the conception and development of the Fordson tractor, is worth retelling.

His father, William, was a fairly prosperous farmer, but young Henry hated the hard work and drudgery of farming.

Years later, Henry wrote: “My earliest recollection is that, considering the results, there was too much work on the place.”

Always fascinated by anything mechanical, Henry left the farm in 1881 to work in a Detroit machine shop, and he became an expert watch repairman as well.

Later, he learned about electricity at the Edison Illuminating Co. and tinkered with both steam and gas engines.

On Christmas Eve of 1893, Henry tested (on the kitchen sink) a one-cylinder engine he had built and, in June 1896, he built and drove his first car, the 4 horsepower, 20 mph Quadricycle.

After three false starts, Henry launched the Ford Motor Company in 1903 with $28,000 in borrowed cash, two lathes, two drill presses, a planer, a saw, a grinding wheel and a forge.

In 1919, when Ford bought out all the original stockholders, the sister of one of his assistants, James Couzens, who had reluctantly risked $100 on the venture, received $335,000.

The first Ford car was the Model A, with a horizontally-opposed, 2-cylinder, 8 horsepower engine and a two-speed transmission, both of which were built by the Dodge Brothers, who later built a car of their own.

1905 models included the Model B, with a four-cylinder engine mounted out in front of the driver and a price tag of $2000, along with an updated Model A now called the Model C that sold for $950.

The N had a 15 horsepower, 4-cylinder engine and was Ford’s first attempt at building a good, inexpensive car for the common man.

Model T. Finally, on Oct. 1, 1908, the famous Model T was announced. Lightweight and mechanically simple, with a 20 horsepower, four-cylinder engine, the Model T could run 40 MPH on good roads.

Easy to drive, simple to maintain and repair, and able to negotiate the terrible, rough, rutted and muddy roads that were normal outside the cities, the popular “Tin Lizzie” sold more than 15 million copies before production was halted in 1927 to prepare for the introduction of the new Model A.

Based on his early, unpleasant farm experience, Ford later said that he had wanted “…to lift the burden of farming from flesh and blood and place it on steel and motors.”

To this end, Henry experimented with steam and, in about 1890, he built a steam tractor that ran all of 40 feet.

In 1907, shortly after becoming firmly established in the automobile business, he built the “Automobile Plow.”

This machine used a four-cylinder, 20 horsepower engine and 2-speed transmission from a Model B car, while the radiator, steering and hubs were from the big Model K.

By 1915, a number of tractors had been built from Model T components and tested at Ford’s farm near Dearborn.

A few of these were demonstrated at the Michigan State Fairgrounds that fall. Photos show the familiar Model T radiator, hood, steering wheel and controls atop a frame that has been bent upwards at the front to provide clearance.

The steel rear wheels have a wide face with angle lugs and the fronts are either wood-spoked passenger car wheels with steel tires or specially built steel wheels.

Two large round tanks are mounted above and on either side of the hood, with one for gas and the other for water.

Two of the tractors have what appear to be padded seats with side and back supports, while the other has a conventional spring-mounted implement seat.

In two of the pictures, the tractors are pulling double discs that look to be 6 or 7 feet wide, while the other is pulling a plow.

During that summer, several models were presented to the public that were nothing like the modified passenger car versions of the previous year.

The engine, transmission case and rear end were bolted together to provide rigidity without the need for an external frame.

While not a totally new concept, Wallis tractors used a variant of the same design; the Ford tractor’s unit construction concept eventually became the standard for all farm tractors.

Most of the 1916 prototype tractors had hoods, one with louvered side panels, as well as fabricated steel wheels that look a lot like the ones used later on production Fordsons.

The driver’s seats are higher and more to the rear than later Fordsons, while the steering wheel shafts are longer and are not centered.

A family-owned company called Henry Ford and Son Inc. was formed to build the new tractors at a plant on Brady Street in Dearborn.

Possibly because the Ford name had already been used on an unsuccessful tractor built briefly by another company in Minneapolis, or maybe because of the firm’s name, Henry chose to call his new machine the Fordson.