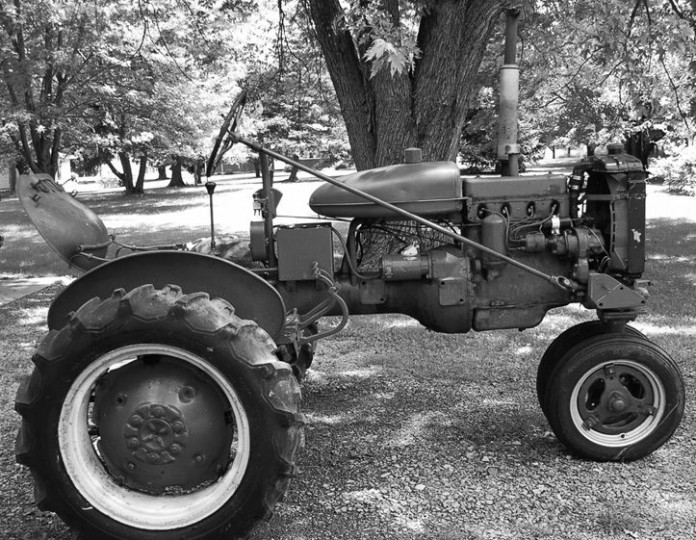 For this, my final Rusty Iron column for Farm and Dairy, I thought it might be fun to dig out my first effort which appeared in the May 7, 1992, issue.

It seems a little crude now, so hopefully, the column may have improved a little over the years.

This column is a new venture for me. The Farm and Dairy has been looking for someone to write about old farm machinery and tractors and asked me to give it a try.

Tom Downing thoroughly covers the steam engine field, and Sunny Hull is chiming in with some good stuff on antique tractor pulling.

I’m not an expert on “Rusty Iron,” but I have accumulated some, and I’m interested in the history of the development and evolution of these machines.

The column, then, will be about the antique tractor and implement collecting hobby and farm equipment history, along with a little about the shows I attend.

Growing up. I grew up on a farm in South Beaver Township, in Beaver County, Pa., during the late ’30s, the ’40s, and the early ’50s. As a kid, fascinated by machinery and tractors, I collected a thick scrapbook of tractor and machinery ads and sales literature. It’s a pity that scrapbook wasn’t saved.

My father, Sam Moore, and my uncle, Chuck Townsend, were partners in running a three-hundred acre farm belonging to my grandfather, Sherman Moore.

For power, they had a team of horses, named Ted and Polly, and an old, gray, McCormick-Deering 10-20 tractor. I remember riding on the platform, holding on to a fender for dear life, while the old 10-20 jounced and vibrated along on steel lug wheels.

About 1939, the 10-20 disappeared and a used, red Farmall F-30 on rubber tires took its place. I was crazy about this tractor and longed to drive it, but my legs were way too short to reach the clutch.

At first, we pulled the old two bottom McCormick-Deering plow we’d used with the 10-20, but later got a three bottom, John Deere, truss frame plow, with rubber tires. The big Farmall and three-bottom plow made quite a rig in our area, since our neighbors all had smaller, one- or two-plow tractors, or none at all.

In the spring of 1941, the horses were sold, and to replace them, a Ford-Ferguson tractor, two-bottom plow, and two-row cultivator, was purchased new. At last, a tractor I was sure I could handle!

Immediately, I started hounding Dad to teach me to drive, and finally, he let me operate the little Ford. I was about eight-years-old and was in heaven.

About three years later, the partners got another new Ford-Ferguson and sold the Farmall, so I never did get to drive it.

Right after this, the partnership was dissolved and the land and equipment divided. Dad ended up with the newer Ford, which we used until he gave up farming in 1953.

Dad moved to Salem, where he managed the Salona Supply Company for many years, and I didn’t have much to do with farming during a career with the Ohio Bell Telephone Co.

As I grew older, I developed a hankering to own an old tractor and, about five years ago, I got my first, a 1941 John Deere H. I now have 11 two-cylinder John Deere tractors, ranging in age from 1938 to 1956, in all stages of restoration, or lack thereof.

A future column will explain why all three of these highly competitive companies built Osborne mowers.

Next time, I’ll talk less about me, and more about “Rusty Iron.” If anyone has read this far, and has a comment, suggestion, or question, please write in care of the Farm and Dairy.

Coming to an end. So now, about 27 1/2 years on, it comes to an end, as everything must. I’ve had a lot of fun, met any number of friendly and interesting people, and gained an incredible amount of knowledge about farming through the years — just wish I could remember it all.

For those who don’t know, I’m moving to Salt Lake City, Utah, where my daughter and son-in-law live. So, here’s to new adventures “way out west!”