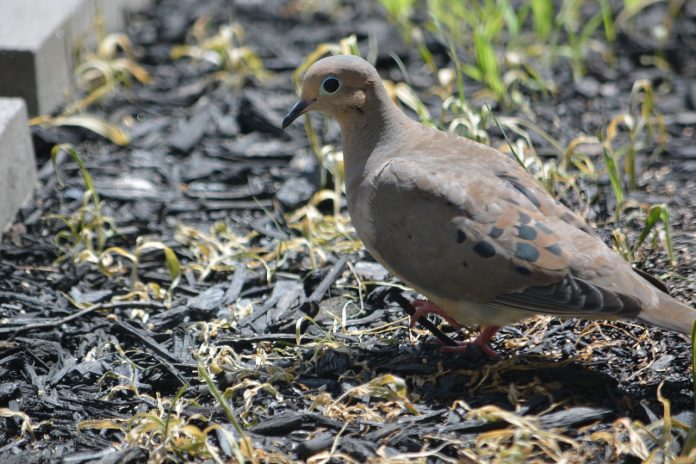 Linda and our grandson, Garek, burst into the apartment a few weeks ago excitedly out of breath.

“We’ve got a nest with two white eggs to identify,” she said.

“But it was on the ground,” Linda answered.

Linda pulled out her phone and showed me a photo of two white eggs nestled in a scrape on the ground.

When I asked where they found it, she said Garek almost stepped on it while running down a hill.

A few minutes later they showed me the nest, which was located on a hillside about 20 feet from a sidewalk. An adult sat motionless, incubating the eggs.

Nothing gets children more excited than close encounters with wildlife, so Garek wanted to learn all about these birds.

Mourning doves are one of the most abundant birds in North America.

They occur across Canada, in all lower 48 states and Alaska.

Key to their success is that they are generalists in every sense of the word. They nest from southern Mexico to Alaska.

Their nesting habits are equally broad. Here in the east, they build a flimsy platform of twigs in both evergreen and deciduous trees along forest edges, in orchards and backyards.

Seen from below, blue sky often peeks through the nesting materials.

In western deserts and prairies, where trees are often absent, doves are content to nest directly on the ground.

Hence my surprise at finding a nest on the ground in North Carolina.

Furthermore, how can a bird that lays only two eggs per nest maintain a healthy population?

The simple answer is to nest early and often. Pairs bond for the breeding season, which runs from March through September.

In some southern states, they breed all year long. In the East and Midwest, mourning doves usually raise at least three broods per year.

The female warms the eggs from dusk to dawn; the male incubates during the day.

While the young are in the nest, parents feed them “pigeon’s milk,” a pale nutritious liquid that adults produce in their crops (the expanded, food-storage organ above the stomach).

Several times each day, the young induce their parents to regurgitate a helping of pigeon’s milk by reaching into the parent’s mouth to feed.

Young doves leave the nest when about 12 days old, though they often remain in the nest tree for several more days.

When they finally leave the nest tree, they join flocks of other independent juvenile doves.

Though fledglings wear a juvenile plumage, they are difficult to distinguish from adult doves.

That’s why I often hear from readers who ask why they never see “baby doves.”

By the time young doves leave the nest, the parents have already begun another family.

Females often lay eggs in a new nest before the previous brood has left its nest tree.

By producing a series of back-to-back nests, doves multiply rapidly, even though they raise only two chicks in each nest.

After explaining dove natural history to Garek, I told him this nest would probably fail because it was simply too exposed.

Over the next few days, we kept an eye on the nest, which we could see from the street as we drove by.

About a week after Garek and Linda found the nest, the eggs hatched.

A seed-based diet, general habitat requirements, an extended nesting season and continuous reproduction during the breeding season combine to make mourning doves one of North America’s most common and widely distributed birds.