The new three rod per person rule should bring smiles  — especially to big water walleye trollers who are expressing varied opinions about the change.

According to those who proposed the extra rod, it won’t change a thing, except of course how long it takes to limit out on the current flood of catchable walleyes in the lake.

For decades the question most asked of Lake Erie walleye anglers upon returning to dockside was, “did you get your limit?”

But in more recent years, following remarkably successful spawns, is, “how long did it take to limit out?” 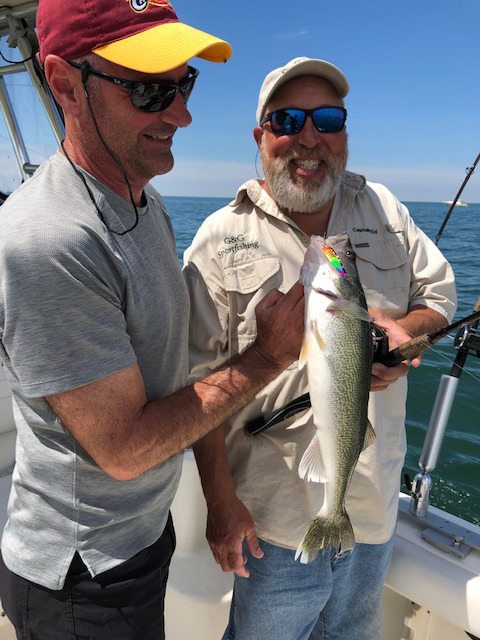 In fact, Lake Erie walleye fishing has been more about catching than fishing. Action has been so fast that some charters have been running multiple trips each day, with limits caught in less time than it takes to make the run out deep water and back.

It’s hard to imaging running even more lines than presently allowed, but it will indeed be fad and fact next spring as trollers perfect the art of keeping multiple lines out of the way of other lines. Lures will need to be perfectly tuned, depth-diving gadgets as well, and other potential tangle problems averted.

Nevertheless, the new three rod rule should help small boaters who fish alone or in pairs, who might find the additional lure in the water to be helpful in finding fish and trouble free to handle.

Comments forthcoming from fishery officials will certainly confirm the simple fact that other states have allowed three rods with no negative results and that the change is not expected to affect the big lake’s walleye population.

Taking care of itself

For several years back when the Lake Erie walleye population was taking a worrisome dive, anglers requested a closed spawning season to provide time for walleyes to reproduce undisturbed.

The official answer to those suggestions was always the same: the lake will take care of itself and there’s nothing that will change that. You’ve got admit that it has done just that.

Incidentally, the three rod rule goes for the Ohio River anglers as well.

Always popular, pheasant hunting trips to South Dakota have dropped in popularity as bird numbers continue there to be spotty at best.

The first pheasant hunt held there was in 1919, a one-day hunt with about 200 birds killed. Just three years later, hunters bagged 15,000 roosters, and it was more and better from then on. But stuff happens.