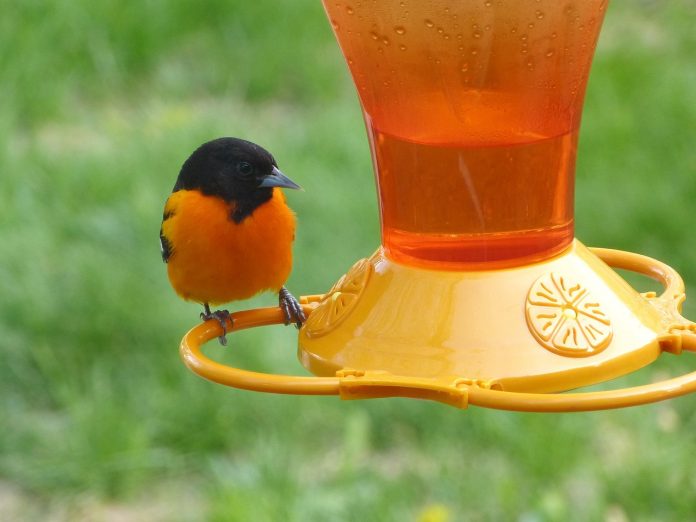 The colors might clash if you tried to go out wearing them — if you could go out.

But red and orange are not a bad combination when it comes to bird feeders: red for hummingbirds, orange for orioles. Mid-April is a good time to put up both kinds, since both species arrive about the same time: late April and early May.

Like hummingbirds, some orioles may be just passing through, while others will stay and build nests. One thing they have in common is a sweet tooth, said Adam Zorn, program manager for the University of Mount Union’s John T. Huston — Dr. John D. Brumbaugh Nature Center.

Not only are orioles attracted to the color orange, they like actual oranges, too. Orange slices, orange wedges, orange halves … as long as there’s a place to perch while they eat them. Zorn said he often sticks pieces of orange on the ends of branches “so they can sit and look, then hop over to eat when it’s safe.”

There are two species of orioles that come to Ohio, said Laura Kearns, a wildlife biologist with ODNR’s Division of Wildlife, working out of the Olentangy Research Station.

Both types of orioles winter in Central and South America, but Baltimores also hang out in Florida and the Caribbean. That may be why Baltimore orioles arrive here just a bit sooner.

Male Baltimores are bright orange with a black head, while orchards are more burnt red or chestnut color. The orchard’s black hood comes down to the chest and looks more like a cape.

The female Baltimore is a paler orange and its back is more brown than black. Female orchards are “more yellow all over,” Kearns said.

The Cornell Lab of Ornithology has both a website, allaboutbirds.org, and a downloadable app, called Merlin, that can help identify different species of birds, as well as their songs.

Orioles “have a very beautiful song,” Kearns said. “It’s one of the most musical and most complex.”

Like Zorn, she discourages using colored liquid to feed orioles. Unless it’s the color purple. Orioles love grape jelly, which can be put in a few specially-designed commercial feeders — it won’t work like nectar in the orange globes commonly sold in garden stores. Or you can just put the delectable goop in a small bowl, as long as there is a place to perch near it.

And the same rules as hummingbird feeders apply: Make sure the feeder is cleaned and the liquid — or jelly — is changed every couple of days in hot weather. Cloudy liquid means mold is developing that could make the birds sick. Like hummingbirds, orioles need the sugary liquid only to supplement their main diet of insects.

Unlike hummingbirds, their liquid feeders should not be kept up all summer, Kearns said. The sugar provides support during migration, but as orioles nest, breed and feed their young, they will be looking for protein instead.

“About the third week of May, if you want to keep feeding them, switch to dried mealworms,” she said.

The Council of Ohio Audubon Chapters is promoting native plant awareness. At audubon.org/nativeplants, you can enter your ZIP code and see which trees, plants and shrubs are beneficial to which birds, in part because of the insects they attract.

For orioles, serviceberry, American plum and American pokeweed are beneficial because all bear fruit in the fall, giving the birds energy to migrate south, Kearns said.

The Nature Center, south of Alliance, covers 162 acres of wooded area in Stark County’s Washington Township. Although the center building is closed, the trails are open, giving walkers great opportunities to watch — and photograph — birds in the trees near the feeding area.

According to eBird, another Cornell Lab site, a total of 158 bird species have been sighted at the center, including both species of orioles. “The birds go to the feeders, grab a seed and take it to the trees to eat,” Zorn said. “You really hear them singing this time of year.”