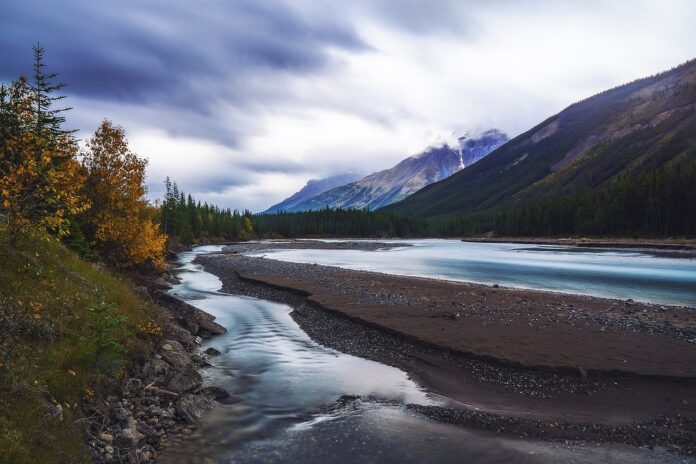 This past summer my grandson, on vacation between graduate studies, spent the time fishing the streams, rivers and lakes of the western states in search of some fishing laurels.

When he completed this solitary challenge and returned to civilization, he reminded me of William Ashley, Jim Bridger and Kit Carson — the mountain men of the early 19th century. He needed to attend a rendezvous, get a haircut, trim and shape the beard, and get a scrubbing with Lava soap.

The Rockies were the home to the mountain men. In 1893, professor Katharine Lee Bates, while teaching a summer course on Chaucer in Colorado Springs, observed these majestic mountains and wrote a song. The song was America the Beautiful, and she vividly called them “purple mountains majesties above the fruited plains.”

This geologic upheaval is the most predominant feature between “Old Man River” and the soft winds of the Pacific Ocean. For some 3,000 miles, the Rocky Mountains travel from New Mexico to Canada and on to Alaska.

There are some 100 ranges in the states of Colorado, Utah, Montana, Idaho and Wyoming that 20 substantial rivers and over 1,000 creeks and streams drain water to the Pacific, Atlantic and Arctic oceans. The Rockies are truly one of the great features from one sea to the other that makes America the Beautiful.

The Spanish pioneers, led by Coronado, were the first white men to see the Rocky Mountains in the 1540s. Then, from the East, via the Great Lakes, came the French following the Canadian streams west until they caught a glimpse of the “shining mountains,” in the Wyoming region as early as 1743.

Pioneers of the mountains

Next came the pelt hungry Americans up the wide Missouri and its tributaries, across the plains into the riches of the Rocky Mountains at the beginning of the 1800s. These were the mountain men.

The mountain men were the pioneers of the Rocky Mountains, who came first as fur trappers, lured to the West by beavers and later by the buffalo. With virgin streams producing the prize catches, there was a reward for trail blazing; trappers thus became the explorers of the far west.

They marked the roads that the Pony Express would gallop and the trails that became the Oregon and California trails to the Pacific coast through the mountains. Between 1807 and 1840, when fur trading dominated the Rockies, thousands of men came west making his contribution to the methodology of the mountain men.

Mountain men were a tough bunch, as many Americans have had to be in building this land. Their courage, skill and mastery of the conditions of their chosen life were beyond doubt, or they would not have been there.

They treasured the loneliness of the mountains and found in this way of life something precious beyond a family life. The solitude experience gave them a gift of friendship and wit that was shared at the annual Rocky Mountain Rendezvous and was kin to the river men, lumberjacks, cowboys or the loafers around any stove at a rural crossroad.

Mingling with the Native Americans, the mountain men adopted the aborigine’s manner of life, food, shelter, morals and — more often — his superstitions. He was fond of the Native American’s love of adornment, suiting himself in moccasins up to his waist and fringed buckskin shirts and coats that were adorned with dyed porcupine quills and colored glass beads.

The energy to endure the mountain life came from buffalo meat, an indescribably rich, tender, fiberless, and gamey meat that was a complete diet. It might be eaten fresh, dried, smoked or beaten into pemmican.

Sitting cross-legged on the ground, using only his Green River knife, the trapper could eat his way through six to 10 pounds of buffalo vitals and washed down with the luxury of alcohol or coffee to clean the palate. It was a boring diet but rarely in the literature is there mention of a sick mountain man.

The men in the mountains preferred wool clothing when they could get it, but mostly he or his Native American wife made entire outfits, moccasins, leggings, shirts, robes, caps and mittens. The skins of the deer, antelope, bighorn, elk, rabbit and buffalo provided the material for the clothing.

The buffalo hides had innumerable uses. The robes used for winter wear, bed clothing, bed covering and moccasins were made of hides taken in the winter when hair was thickest. The best season for tanning was winter since the cold air and the lack of sunlight lengthened the process making for a higher quality hide.

The equipment necessary to survive in the mountain trade was a rifle, pistol, steel traps, shinning knife, Native American blanket, powder horn and bullet pouch, a whetstone, flint and a pipe with plenty of tobacco. Tomahawks, axes, a dog or two and a well-trained horse made the mountain man independent and almost as rugged as his most dangerous adversary — the grizzly bear.

The men of the mountains called no man lord or master, and they were as free as the wild game they pursued for trading.

There were three types of mountain men: the hired trapper who was paid an annual wage by a fur company; the trapper, who dealt with a single company; and the free trapper, who disposed of his furs when and where he pleased.

Living a solitary life, keeping a safe camp from grizzly bears, and hiding his trapped furs from four legged and two legged thieves — the mountain man relished the rendezvous each summer.

The late summer rendezvous held at an appointed mountain valley each summer, between 1825-1840, was the most interesting and typical institution of the fur trading days. White trappers, Native Americans and fur company representatives gathered to do business, socialize, drink and tell stories of mountain adventures.

Fur companies from Missouri brought their supplies and traded goods and the art of bartering flourished. With drinking, gambling, racing and contests of skill, the mountain men made this event a “civilized” holiday. In a few days of “lavish” living, the men frequently spent the year’s earnings.

Few realized that their carefree days in the Rocky Mountains were numbered. With the introduction of the silk hat and the decline in beaver skin prices, from $8 apiece to $2, the men of the mountains forsook their traps and became traders with the Native Americans.

Buffalo robes replaced beaver pelts, and the trading post replaced the rendezvous. With the coming of emigrant home seekers, government exploring, military expeditions and pioneers heading to California and Oregon, the mountain men became scouts and guides to the wagon trains.

They led the newcomers over the paths they developed during trapping adventures. The advancing civilization soon “rubbed out” the mountain man. That’s your history!