This week I’m going to attempt to kill two birds with one bush – er, that’s not right – but you get the idea.

I’ll identify an item that was in Hazard A Guess, and that has gone un-named for several weeks, as well as fill a Let’s Talk Rusty Iron column.

Item Number 896, which first appeared in Hazard A Guess on (I think) July 8th, is described as a “cast iron clamp-like tool (that) measures 6-5/8 inches closed and 12-3/8 inches fully extended.”

The clamping lever and movable jaw can be slid anywhere along the grooved base and a half turn of the handle tightens the clamp by a mere one-eights of an inch. Cast into the tool is the name “E.C. Josef Buffalo N.Y. Pat. Apr —- (unreadable).

And what, you may ask, is a molder’s flask? No, it’s not the bottle he keeps handy to cut the foundry dust from his throat. Objects made by casting iron, steel, aluminum, and other metals, have long been formed by pouring the molten metal into molds made of sand in the process called “Sand Casting.”

First, a wooden facsimile, or pattern, of the finished object is made by a pattern maker. The pattern is then pressed into damp molding sand that is rammed, or packed tightly enough around the pattern so that the sand will retain its shape when the pattern is removed.

The sand mold is contained in an enclosure called a “flask.” The flask consists of two halves, the bottom, or “drag,” and the top, or “cope.”

There is a hole in the top of the cope into the interior of the mold. After removing the pattern and to prepare for pouring the object, the cope is placed on top of the drag and the two halves of the flask are clamped together.

Then the molten metal is poured through the hole in the cope and the mold is filled. After a suitable length of time to allow the metal to cool and harden, the two halves of the flask are unclamped and separated, freeing the completed casting. This is where Mr. Josef’s flask clamp came into play.

In a production foundry where the clamping and unclamping of the flasks was done probably hundreds of times a day, a clamp that could be easily and quickly put into place and tightened, or just as easily unclamped and removed would be essential.

Josef said in his patent application that the object of his invention “is to provide a suitable clamp for molders’ flasks or other purposes which is capable of exerting the necessary force of a screw at the point required and of being instantly released from the screw, so that the clamping pieces may be easily moved to and fro to accommodate them to flasks or other articles of different depths, whereby the force of a screw is only used where a clamping-power is required.”

Whew! That is some sentence. I’ve been unable to find any personal information about Edward E. Josef. He probably ran a foundry, since his name is cast into the clamp owned by David Hodges, and he had other inventions to his credit, including heavy items such as railroad car wheels, steel vehicle wheels, and a steel door for railroad grain cars.

Josef gave attention to smaller objects as well, for he had patents for industrial pulleys, a bicycle stand, and a coupling for steel shafts. His last patent was in 1921 for an anchor for automobile radiator caps “so they won’t be lost or stolen.”

He didn’t neglect housewives, as in 1888 he got a patent for a “Pillow Sham Holder,” a light steel frame that clamped to the head of a bedstead and that had other adjustable clamps to which the loops of pillow shams could be attached.

The clamps on the gadget were similar to the ones used on his flask clamps and were quickly tightened and released. One feature of the thing he made sure to mention was that the shams “can be raised up and held in an elevated position away from the pillows.”

No more throwing the shams into the corner when one wanted to go to bed, or maybe on a nearby chair, which is what Nancy does with ours.

Anyway, it was fun to find the actual patent for a Hazard A Guess item and to learn a little about the sand casting process.

By the way, wish me a happy birthday – I turn seventy-seven today. 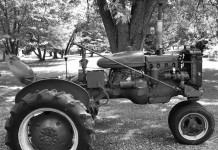 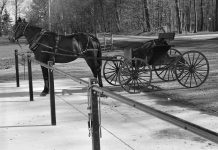 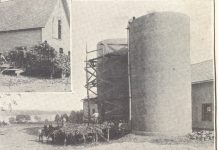