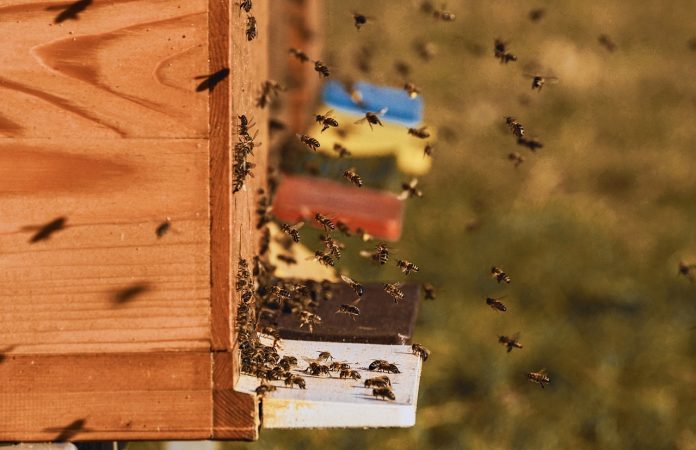 The sun was rising over the hill casting its light on the valley below and burning off the morning dew on this crisp spring morning. Birds filled the trees and air with their harmonious songs. Two deer grazed peacefully under the blooms of the redbud tree. All of it combined formed the true epitome of a serene morning in the foothills of Ohio until….. CRRRRRRRIIIIIIIICK.

The horrific sound of an exoskeleton getting crushed as I pulled out the bee feeder from the hive cut through the air like a needle being dragged and jerked off of a record. It brought all of the serenity to a stop.

Moments before as my wife and I were preparing to leave for work she asked if I could refill the bee feeder that hung from the front of the hive box. I was in a hurry and thought I don’t need to put on the bee suit to just slide the feeder out and refill it. My wife, who always wanted the bees, stood out in the middle of the yard at an extreme distance, barking orders like General Patton as she wasn’t sure if she was allergic to bees or not.

As I slid that feeder out that morning the sound of crushing bee filled the air and was followed by a moment of silence before the whole hive box began to quiver and shake. The sound of silence was broken by what can best be described as a fighter jet turbine engine being started and bees began to pour out of the box.

In a typical hive, 99% of the approximate 60,000 bees are female. When William Congreve wrote in 1697 that hell has no fury like a woman scorned, he clearly was writing about beekeeping. The Old Testament plague of bees that filled the air came out with a fire and brimstone fury all focused on avenging the death of their fellow sister.

Here is something they don’t tell you in Beekeeping 101: when honey bees attack, they don’t slap the back of your hand and ask you to please don’t do whatever anymore. Instead, they go straight for the throat and face.

My choice of a black T-shirt was not the wisest that morning as I appeared to look like a black bear out for a sip of honey for breakfast, and I was instantly hit and piled on. My blood was being replaced by a complete transfusion of bee venom as I rolled on the ground to my feet and did my best Jesse Owens impersonation as I jumped and sprinted away.

However, the black shirt decision paled in comparison to my wife’s decision to wash her hair that morning with Vidal Sassoon’s most floral scented of shampoos. The bees hit her standing in the middle of the yard like a runaway freight train and turned her from George Patton barking orders to Dumbo’s Clown Mother outside the burning tower running frantically around. As she serpentine throughout the front yard clawing at the bees burrowing through her hair to her scalp she began to scream and then pray and then confess to sins she never even committed. By this time I had recovered and yelled to her to stop, drop, and roll. As she was deafened by the buzzing radiating from her hair, I ran and tackled her in the middle of the yard.

As I used my weight and arm to pin her to the ground to stop her from flailing, so I could begin to eradicate the bees, I looked up to see a school bus passed by with 40 children faces wide-eyed and mouth agape staring at me. I sat there picking bees out of my wife’s hair, listening for sirens in the distance en route to a potential domestic issue, and all I could think is welcome to beekeeping!

Obviously, beekeeping is not for everyone. It is an expensive, sometimes intense, and relatively demanding hobby. There are rewards, but there are a lot of pains too, both figuratively and literally. The plight of the pollinators is very real and severe. The significant decline has resulted in a great taxing of the web of life. Bird populations are decreasing and plant numbers are falling. Impacts on food production are inevitable. You don’t have to have the lyrics of Joni Mitchell’s Big Yellow Taxi on your coccyx to be concerned (although it is alarming the song is still relevant 51 years later).

You can save the bees, the butterflies, bats, and all other pollinators on a piece of ground the size of a postage stamp to 100 acres. If you have no land you can still do your part. You don’t need to set up beehives or anything else elaborate. It is all relatively simple and things our forefathers did before us. It is not until recently that man has felt he has conquered nature as things begun to sticky.

My father went from a sensible man to being a bit out there. He loves his gardens and for a long time, I thought I was born, so that I could pull the weeds in the gardens. Once I grew up and moved away he turned to chemical dependence to eradicate all of his weeds. Every time we visit he transforms into Dr. Bunsen Honeydew proudly displaying the latest chemical to apply to fix this and stop that.

Here is a secret that can be garnered from one of the great minds of our times, Kevin Bacon, everything is connected. So if you kill weed A you are taking insect B’s food source, which causes Bird A or Plant B to perish. We won’t even talk about the web of fungi that lives and trades like the New York Stock Exchange in the soil beneath our feet. The more you impact the land with chemicals, the more dependent the land will be for additional chemicals or practices to supplement. Essentially, the more you spray the more you pay.

If you want to truly help the pollinators and see more wildlife and birds in your backyards or woods, plant native plants. George Washington and Thomas Jefferson planted all natives as an homage to this beautiful country and because it saved them time and money. Native plants need no soil amendments, no fertilizer and little to no sweat equity.

Not all natives “are boring” as my dad would say. Think beyond milkweed. Look at Nutall’s Sunflower — a great pollinator that has a small daisy-like flower that smells like dark chocolate. Or Clethra that has a fragrance that is more pleasant than lilacs. Fothergilla that bloom early in the spring or witch hazel that blooms in the winter. All of these are great pollinator plants and all plants that are unique and enhance landscapes.

Finally, maybe mow less or rotate some areas on your mowing schedule. Implement these practices and you will save money and save the pollinators. Implement these practices and your marriage vows will not be tested by 60,000 bees as nothing makes you question love more than having a bee in your bonnet and hearing the deadbolt of the house click as your wife stares at you from the other side of the door.