Large round bales are the most popular source of hay when winter feeding beef cattle. Unfortunately, these bales are subject to a variety of losses, including feeding loss.

Research published in the Journal of Animal Science has shown feeding losses can be influenced by bale feeder design. The feeders investigated in this research trial were ring, cone, trailer, and cradle type feeders. The percentage of hay loss ranged from 3.5 to 14.6 percent.

Cone and ring type feeders respectively exhibited the least amount of loss, while the trailer and cradle feeders exhibited four times the waste per animal compared to the cone design. This trial documented changes in animal behavior influenced by feeder design.

We know feeding hay in small amounts frequently minimizes waste. However, this method increases labor cost and is not always practical for all producers. How can we minimize hay feeding loss in a grazing system?
Move the hay feeding area frequently. By minimizing the time livestock feed in a particular area we reduce mud. This can be done by providing enough hay for three days.

For example, a heavy-use pad can minimize feeding loss.
Consider the example below from the MU Forage Systems Research Center. 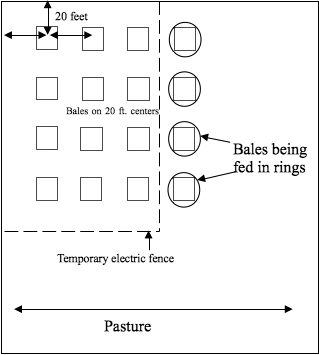 In this system they utilized low labor, large round bale rings. Hay was placed in the winter feeding area, spaced on 20-foot centers. The number of bales per paddock was based on bale size, number of animals, and length of stay.
The bales were grouped on 20-foot centers in a corner of the pasture. Temporary electric fencing was used to protect the bales to be fed later, while allowing access to enough bales for three days feeding in the rings.

When the three day supply is eaten, the temporary fence is moved back and the next group of bales are covered with the bale rings. This is just one method to minimize waste and mud; and it may not require a tractor once the hay is in place.
In summary, for winter feeding rotate the feeding area, minimize the use of heavy equipment, and set out enough forage for a two or three day feeding period.

When we take the time to listen

The gifts to keep on giving — and living