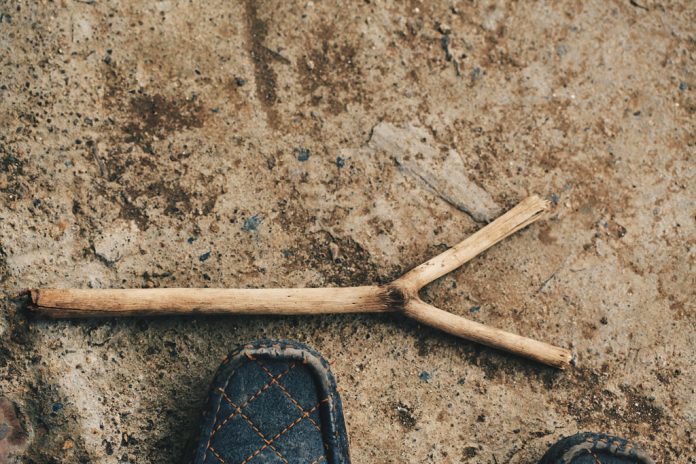 “My sister-in-law is no witch … she is simply a dowser. She is capable of divining underground water with a stick. She does not merely have the power, she uses it. And she uses it profitably.”

Water is a valuable resource, and a good well is never to be taken for granted. This was one of the first rules I learned as a farm kid, and the lesson came after foolishly letting the stock tank run over.

I had long known that farmers in various parts of the country have been forced to rely solely on cisterns to capture rainwater, haulers bringing in the balance of the required water. I have known farmers who rely on the use of springs to build water containment systems, since no farm or home could survive without a good water source.

Adele Crockett Robertson writes in her memoir, “My father (circa 1930) thought a dowsing rod unscientific and hired an engineering firm to find us a well. At huge expense they drove pipes in all the likely-looking places — without result. Finally, they struck a gusher, and there the well was driven and the pumphouse built.”

She tells that her father generously donated water to several neighbors, and his generosity cost them all that wonderful water, breaking through the freshwater vein into the underlying brackish vein, bringing dirty, horrible-tasting water from that once-perfect well. Years later, she and her husband’s desired return to the farm depended on finding a water supply.

They retained a water dowser, who “walked out back of the house with his forked stick, stamped his heel into the spot where the pull was strongest, and drove a fine well not fifty feet from a dry pipe that marked one of the failures of the engineers.” Later, this great find proved to be contaminated water, but water in abundance.

It was while reading this that a childhood memory of my paternal grandfather came rushing back. It was from so long ago, I went to my mother and one of my sisters to be sure I wasn’t dreaming it. They assured me I was remembering correctly.

Then I hunted up my old notebooks and found further verification from a story I wrote for a newspaper long ago. When the digging of wells with water pumps evolved, my grandfather, R.H. Young, was in great demand as a water dowser. My mom and sister verified my memory of watching him help determine the best placement of a well.

He used two divining rods, and I recall watching the rods do nothing as he walked slowly, then, inexplicably the rods would cross over. He would sometimes feel certain, but in other cases, he would say the pull was not strong enough to support a well. He tested his find by walking away and starting again.

Years ago, an older gentleman in our community asked me if I realized how gifted a water witcher, or dowser, my grandfather had been. I did not, assuming many people accomplished such work in those days. Jack told me my grandfather was called to farmsteads all around.

“Several shallow wells had failed for one large farmer, I remember, and he was having trouble finding water,” Jack said. “He somehow located your grandpa, and I went along with him. That day we had just about given up, and the fellow was dejected, re-thinking his whole farm plan if he had to rely on a cistern. Your grandpa just kept walking.”

Jack described watching as my grandfather walked north of the house a long way, not willing to give up. He suddenly let out a whistle, and Jack ran towards him.

“I watched those rods turn in his hands like a helicopter taking flight. It was really something to see, I tell ya!” Jack said, adding that a very happy celebration ensued.

The well was dug and proved a strong water producer, and the owner built a successful dairy farm there.

My mother told me my grandpa did much the same for her and my father when they were newlyweds wishing to add running water for their milkhouse.

“I had never seen such a thing as those two straight rods, doing nothing at all and then suddenly crossing over. I was astonished, but your dad didn’t seem to think anything of it, because he had seen his father do it all his life.”

My sister remembers as a young adult our grandfather handing the rods to her, telling her to give it a try.

“I never could get it to work for me, but for him, it was effortless,” she tells me.

Dowsers are likely taken with great skepticism by some, and surely our scientific advances have made this a moot point, but it is an old-worldly way of doing things that still peaks interest for many.

For me, reading about it in one woman’s long-ago memoirs gave me a surprising gift, my own memory of a grandfather who walked local farms so long ago, divining water from the earth.